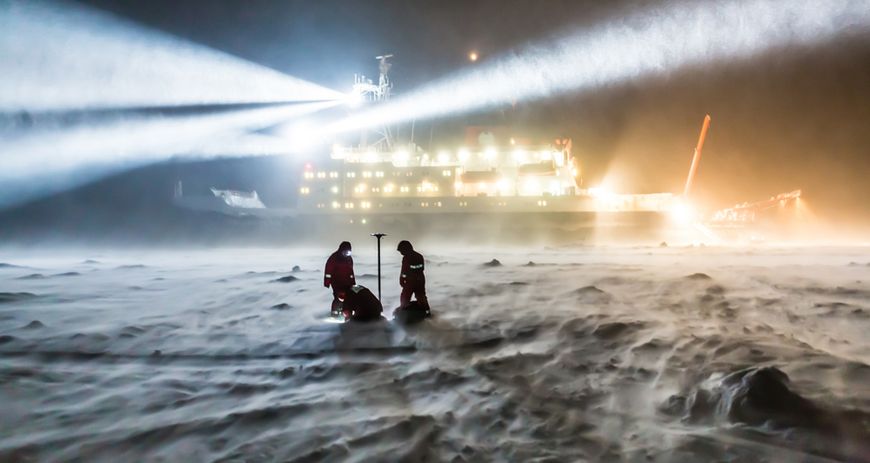 What climate researchers are planning for the Polarstern

In a little over two years, the research ship Polarstern will be embarking on an adventurous expedition. The ship will be drifting through the Arctic for a whole year, frozen into the ice. Thus, scientists hope to gain new insights into climate change.

More than 120 years have passed since the last time a research crew embarked on such a daring undertaking. In 1893, the Norwegian Polar researcher Friedtjof Nansen was frozen into the ice on board of his research ship, the Fram. At that time, he hoped to reach the North Pole with what he assumed was the natural drift of the ice. His ship was frozen into the ice for three years. It didn’t cross the North Pole. His attempt to reach the North Pole on skis and with sled dogs was also doomed to failure. Nevertheless, this expedition still counts as one of the bravest and most successful ever.

Another expedition hopes to follow in Nansen’s historic footsteps quite soon. In 2019, the German research ship Polarstern will be setting off for the Siberian Sea, where it will be frozen into the northern ice for a whole year and drift through the central Arctic. This being possible at all was one of the most important insights gained by the Fram expedition. Admittedly, there is more at stake now than merely reaching the North Pole. The research team led by the Alfred Wegener Institute, Helmholtz Center for Polar and Marine Research (AWI) aims to investigate the Arctic climate more extensively than ever before. Previously, the researchers had collected most of their data during the Arctic summer. This daring expedition will now give them the opportunity to do so in winter which is important to improve our understanding not only of the Arctic, but also of the highly complex climate processes all around the globe.

"We are recording a particularly strong warming trend in the Arctic, and the ice is retreating dramatically,” says Markus Rex from the AWI, who is coordinating this international project from the AWI’s Potsdam location. “However, our understanding of these processes is currently inadequate. We hope that this data will give us fundamental new insights into global climate change”. He recently presented the project to a broader public for the first time at the AAAS science conference in Boston, USA.

The expedition was developed under the aegis of the International Arctic Science Committee, and was given the name MOSAiC - an acronym of Multidisciplinary drifting Observatory for the Study of Arctic Climate. It is expected to cost more than 60 million Euros. The money is being provided by around a dozen polar research organizations and other sponsors from all over the world. “It's well invested,” says Rex. “Our research will help bring about a quantum leap in climate research.”

“The one-year expedition will focus on performing countless measurements and experiments on site,” he says. The researchers aim to improve their understanding of the complex interplay between the ocean, the ice, the atmosphere and the ecosystem. For this, they will be building a whole network of stations on the ice around the Polarstern at a distance of approximately 50 kilometers. These camps will accommodate small groups of researchers performing complex measurements; they will receive some of their supplies by helicopter. They will effectively be drifting along with the research ship. “This is sure to be a logistic challenge,” says Rex.

“We’ll be measuring everything a climate researcher’s heart could possibly desire,” says Markus Rex. One of the focal areas will be the sea ice and the processes which cause it to form. “This is quite complicated. The water doesn’t just freeze,” says Rex. Ice crystals form throughout the uppermost meters of the water column, then float to the top, collect on the surface and clump together. The researchers aim to find out exactly what happens during this process. The energy transition between the ocean and the atmosphere is just as important for our knowledge of climate processes. However, it is still poorly understood. “Large amounts of energy are transported from the warmer latitudes to the Arctic with the ocean currents. Here it is taken up into the atmosphere through small eddies in the ocean and air and through cracks in the sea ice, and has a critical influence on the energy balance in the Arctic,” says Rex. Last but not least, the researchers are interested in the transport and deformation processes in the ice that take place during the winter and the melt processes in spring.

“What does the krill do in the winter under the ice?” asks Rex, and answers his own question: “We still don’t know exactly. We know that krill and plankton survive the winter and that large plankton blooms appear in the Arctic when the ice breaks up in spring.” But what exactly happens, and what could happen if the ice were to retreat even further? There are a lot of processes that cannot be observed by satellite, for example what kind of plankton that swims in a melt pond, or what the tiniest currents in the boundary layer of the atmosphere are like. The list of questions that scientists want to answer could go on for pages and is sure to grow even longer before the expedition sets off in two-and-a-half years.

Nobody knows exactly which route the Polarstern will take when it crosses the Arctic. The researchers can only estimate this on the basis of statistics. Various routes are possible. If all goes well, they could emerge from the ice between Spitzbergen and Greenland in 2020. Things could get difficult if the Polarstern drifts too far towards north Greenland. “It would never get out of there unassisted,” says Markus Rex, and stresses that this risk will be minimized by careful modeling and selection of the starting point for the drift trajectory. All the same, drifting does mean drifting. The engines of the Polarstern will be switched off during this adventurous voyage. The ship will be frozen solidly into thick ice. “For better or for worse, we are dependent on how the ice drifts. We have to live with this. If we don’t like it, we can get annoyed, but it won’t change anything.”

Rex will be on board at the beginning of the journey and then rejoin the ship in spring 2020. Each scientist will probably remain in situ for two to three months. There will be five to six complete changes of crew during the year-long project. The scientists will be flown in on Russian long-range helicopters – via a depot of helicopter fuel specially set up on Bolshevik Island. Partner ice-breakers will occasionally supply the Polarstern with fresh fuel. Even when the ship is in standby mode, it will need 15 tons of fuel a day – just to keep the heating and the electric systems running.

These systems will also be sending the initial results to Potsdam. “We assume that we will obtain important results just by drifting,” says Rex. He expects the first publications to appear shortly afterwards – and that these will significantly improve our understanding of our global climate system.