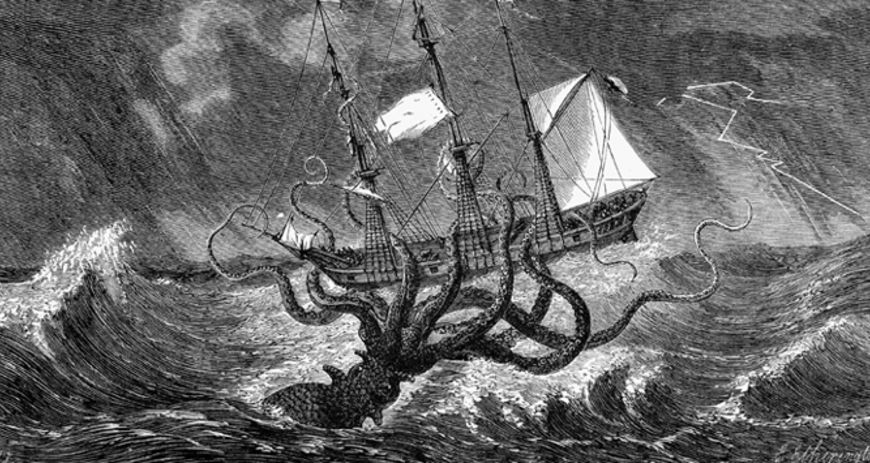 <b>Sea monster</b> Giant squids that are so huge that they can pull sailboats down into the murky depths – these more likely belong under the category of sailors’ lore. Photo: ullstein bild – Granger, NYC

A research group led by the US scientist Craig McClain put together reliable data regarding the dimensions of marine life. Their results now cast doubt on some lore.

Back in the 70s, nobody really wanted to trade places with Chief of Police Martin Brody. He knew early on that the only possible explanation for the death of a young swimmer could be a shark attack, and he called for the closing of the beaches at the seaside resort Amity. But the mayor refused. He was afraid that the tourists in the upcoming season would fail to appear – it was thus clear to Brody that more people would die. In the first part of the blockbuster “Jaws”, he finally killed the extraordinarily large specimen after a spectacular pursuit in the open sea – and, once again, Hollywood had thus created the image of a sea monster. They had to be bloodthirsty and, especially, huge in order to fulfil their purposes for horror films. That the length specifications for many marine animals were obviously exaggerated not only in popular media but in scientific technical literature as well has been documented by a research group led by the marine biologist Craig McClain from the Science National Evolutionary Synthesis Center in Durham, North Carolina, USA. In a study published mid-January in the open-access magazine “PeerJ”, the scientists show that there are considerable differences between the actual documented dimensions of marine animals and the spectacular lore. Regarding the great white shark, for example, they were only able to substantiate a maximum length of about seven metres, not the eight metres that are frequently peddled in films. For the giant squid, a maximum length of 12 instead of 18 metres is supportable, according to the study. And a whale shark comes in at maximum 19 instead of 21 metres. /p>

The team collected dimension data for 25 species overall. In their investigation, scientists spoke not only with colleagues – they also took into consideration information from museum exhibits and searched through various data bases. They were thus able to show that the older sources, in particular, frequently provide dimensions that are clearly exaggerated. Furthermore, most animals of a species do not attain the maximum size at all – the great white shark for example grows to only four metres on average. And which marine animal is actually the biggest? Research scientists are wary about answering this question, But the lion’s mane jellyfish is a promising candidate. Including her tentacles, she could reach a maximum elongation of almost 37 metres, thus rendering her possibly longer than any other marine animal. However, the records for this long creature were taken in the year 1865. How specifically the animal was measured in this case was not documented. Craig McClain’s team is therefore sceptical whether this value is true. It is somewhat easier to record the dimensions of the great blue whale. A number of specimens are supposed to have reached a length of more than 30 metres.  In two cases, even 33 metres were measured.

There are still doubts remaining in regard to these cases, the researchers contend. And there can, presently, be no absolute certainty anyways: these marine animals are still for the most part unexamined. Perhaps there are living organisms swimming in the depths that we know absolutely nothing about. Thus a bit of spookiness will have to remain when we stroll into the waves on our next visit to the beach – while humming the theme melody to “Jaws”.