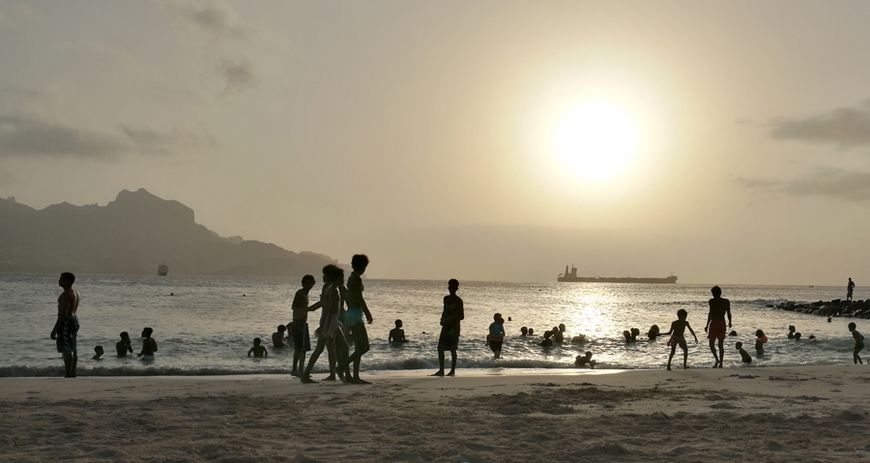 Cape Verde consists of some 15 islands off the west coast of Africa and has long been an important site for marine research; research vessels from around the world make regular stops here throughout the year. Picture: Björn Fiedler

Björn Fiedler and his family left their home in Kiel, Germany to spend six months in Cape Verde. The marine chemist had been posted at the new Ocean Science Centre Mindelo. Fiedler reports on beachside Christmas celebrations and the hunt for oxygen-deficient eddies in the world’s oceans.

The dark blue sea is teeming with marine life and the mild climate warms the air temperature to a comfortable 30 degrees Celsius. "The Cape Verde islands are simply paradise," enthuses Björn Fiedler, a chemical oceanographer at GEOMAR, the Helmholtz Centre for Ocean Research in Kiel. The archipelago consists of some 15 islands off the west coast of Africa and has long been an important site for marine research; research vessels from around the world make regular stops here throughout the year. Björn Fiedler and his family set up home in Mindelo, a city on the island of São Vicente, for their six-month stint. This is where the Ocean Science Centre Mindelo, a new center for marine research, opened in November of last year. The German Federal Ministry of Education and Research supported its construction by allotting 2.6 million euros via GEOMAR’s institutional funding. The center was jointly realized by GEOMAR and the National Cape Verdean Fisheries Research Institute INDP. "I was there from the very beginning," 36-year-old Björn Fiedler says with pride.

The marine researcher worked to set up laboratories, oversee the ocean observatory, and organize special events with researchers and politicians – and had to improvise quite a bit along the way too. "When you’re living on an archipelago off the coast of West Africa in the middle of the Atlantic, you need to either have lots of spare parts or ship things in from Europe if something serious happens. For instance, we didn’t have a replacement part for the liquid nitrogen generator in our lab," recalls Fiedler. The research team could only freeze biological samples using liquid nitrogen for preservation and shipment after the part had been flown in from Kiel.

In September of last year, Fiedler headed to Cape Verde with his partner and their two young children. During the winter months, he teased his GEOMAR colleagues back in Kiel with emails along the lines of, "It’s starting to cool down here – it’s only 23 degrees at night!" Six months later, Fiedler is back in Kiel and enthusiastically sharing his adventures: "It was great how unbelievably warm and child-friendly the people there were." His three-year-old daughter, Merle, attended kindergarten in Mindelo and picked up her first few Portuguese words in no time at all. "It seems she can sing every Portuguese children’s song there is," says Fiedler smiling. If you were to ask Merle about her time in Cape Verde, her father says she is likely to tell you about Capoeira, an Afro-Brazilian martial art/dance that she learned in kindergarten. His one-year-old son Jonas, who spent one-third of his life so far on Cape Verde, was enamored with the soft sandy beaches. "Celebrating Christmas on the beach and swimming in the ocean were pretty special moments for all of us," says Fiedler.

"The region is extremely interesting for marine and atmospheric research."

The Cape Verde islands were also great from the perspective of the marine chemist’s research. "The region is extremely interesting for marine and atmospheric research," according to Fiedler. The environment off the coast of West Africa is home to one of the most productive ecosystems in the world. Nutrient-rich water from the depths of the ocean rises to the surface and stimulates growth. This accounts for an unbelievable volume of living organisms, as well as a vibrant fishing industry. Fish caught in the North Atlantic are a staple source of food for the populations of many West African countries. "You could really get a sense of fluctuations in supply at local fish markets. There were times when you couldn’t buy certain fish at all or prices would soar because so few were caught. It’s a big problem for many Cape Verdeans."

This is related to one of Björn Fiedler’s research topics: Climate change is causing warmer surface-level water temperatures, which means that lower levels of oxygen are being absorbed; the vertical transport of fresh oxygen to deeper ocean layers is thus also reduced. It is speculated that this is leading to the expansion of oxygen-deficient zones in the world’s oceans, which could in turn lead to decreasing fish populations. Together with his colleagues, Fiedler is also researching how nutrient-rich dust blown into the ocean from the Sahara desert impacts marine life. "I experienced five desert storms in six months," says Fiedler.

The international community of marine researchers is important to Björn Fiedler. "Until recently, West Africa was a blank spot on the map in terms of research collaborations. There is definitely some catching up to do. I envision the Ocean Science Centre Mindelo developing into a whole colony of bustling scientists and students from around the world, exchanging ideas and taking advantage of the great research environment." Fiedler made his first stop in Cape Verde ten years ago when he was on board a French research vessel. At the time, the marine chemist was still a doctoral student at GEOMAR and was installing innovative CO2 sensors in autonomous submersible buoys, so-called Argo floats. Today, there are more than 4,000 Argo floats in oceans all over the world, creating a global monitoring network. Satellites control the robots, which dive and surface automatically at pre-determined intervals to gather data at various ocean depths. This enables climate researchers to capture parameters, such as ocean temperature, salinity, and oxygen levels, around the clock.

"Autonomous measurement platforms deliver a higher resolution image of the ocean than research vessels," says Fiedler. "On a ship, we stop every few nautical miles to take water samples, but we have no idea what’s going on in between." The autonomous robots are to thank for Fiedler and his colleagues learning about the oxygen-deficient eddies off the coast of Cape Verde, a "previously unknown phenomenon." The eddies are a significant discovery for the researcher. Fiedler could hardly believe his eyes when one of the measuring drones returned an oxygen reading close to zero at a depth of 100 meters. "We initially thought it was a measurement error," says Fiedler smiling, since such low oxygen levels had never before been measured in the open Atlantic. The researchers set out from Cape Verde on the hunt for eddies aboard a research vessel called Islåndia. They found one with a diameter of 100 kilometers. "Finding this eddy is a classic example of how we can make new discoveries using modern technologies," says Fiedler. "This spirit of discovery is naturally a huge motivation for me as a researcher."

Back at GEOMAR in Kiel, Björn Fiedler wistfully thinks back to his second home. "It was 25 degrees Celsius when we got on the plane and minus 8 when we landed." His son Jonas took his first steps barefoot on Cape Verde and his first steps in winter boots back in Northern Germany.