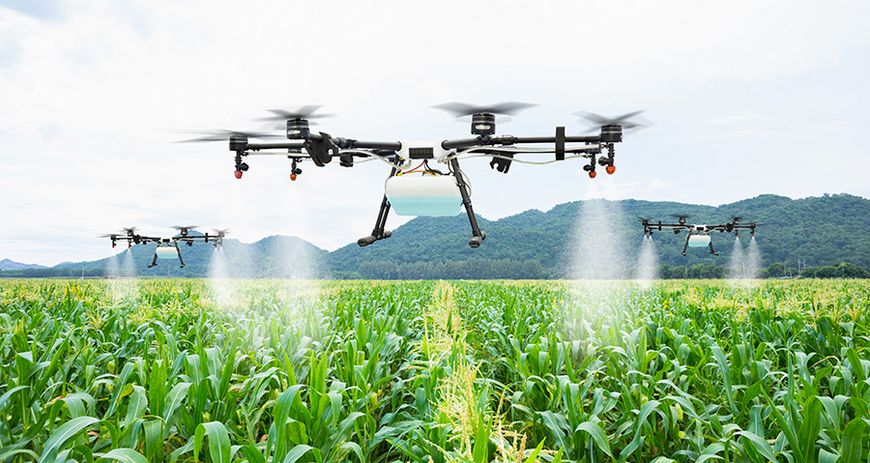 With AI against drought and pest infestation

Climate change also poses major challenges for agriculture. In an interview, biologist Ulrich Schurr reveals what needs to be done, what role artificial intelligence plays in this, and how a new research cooperation with researchers from Israel could also help German farmers.

Mr. Schurr, this year people in the northern hemisphere experienced the hottest summer since the beginning of weather recording. How was the agriculture?

The farmers had to irrigate a lot in summer. This year, some farmers even had to irrigate carrots and potatoes artificially. Until recently, such plants did not really need this in Germany. A few years ago, only about five percent of the agricultural land in Germany had to be artificially irrigated. This figure is likely to be much higher now - and it will continue to rise. This is mainly due to climate change. As a result, precipitation tends to decrease and drought increases.

Israel has a lot of experience with little precipitation and dry soil. Surely this is one of the reasons why a research cooperation with Israeli scientists was launched a few days ago?

In addition to its climate, which is "interesting" for research, Israel also has excellent scientists. We believe that together we can help agriculture to adapt to climate change. This is why Forschungszentrum Jülich and the Helmholtz Centre for Environmental Research - UFZ have signed a Memorandum of Understanding with the Volcani Institute of the Israeli Agricultural Research Organization (ARO). The common goal of the cooperation is to improve the use of water and nutrients in entire agricultural systems. The focus will be on plants, soils and the water balance, but also on the use of agricultural residues.

Can't dry soils and periods of drought like this summer be compensated for simply by increasing artificial irrigation?

Irrigation is important, but it also has consequences for the water cycle. You have to be careful, because farmers draw considerable amounts of groundwater for artificial irrigation. Moreover, drought is only one of many changes brought about by climate change. New insect species and pests are slowly spreading to regions where they could not live before. And the amount of carbon dioxide in the air is increasing: Before industrialization, it was 250 parts per million, or ppm for short; that is the unit of measurement commonly used for this. Today it is already at 400 ppm, and by the end of the century it will be 800 ppm.

What does that do to plants?

This is exactly what we are currently observing in Klein-Altendorf near Bonn. Here, we are simulating the future to a certain extent: In the fields there, we have set up an experiment in which we release CO2 from a circle of tubes with a diameter of almost 18 meters and are thus observing how different genotypes of crops such as cereals and potatoes will behave in the future. CO2 in itself is not a problem for plants; after all, they need it for photosynthesis. However, other factors such as drought, certain pests or changing soil conditions cause plants considerable problems.

What can be done about this?

The first step is to understand: What puts plants under stress, how do they react to which changes and environmental stimuli? The roots in the soil are particularly important here, but we know very little about that. They are difficult to study without taking them from their natural soil or at least "disturbing" it. To do this, we use very special experimental equipment: magnetic resonance imaging (MRI) and positron emission tomographs (PET), which are otherwise only used in medicine. We use them to regularly scan the floor columns. With our equipment, we can observe very precisely how the roots grow, and with PET we can even follow the transport of carbon in the roots. We gain a lot of data that needs to be evaluated. Artificial intelligence is also used in this process. The topic of artificial intelligence is also central to our joint research with colleagues from Israel.

What insights do such data provide, and what benefits do they have?

For example, we learn how precisely we have to irrigate so that the roots grow ideally. And what interventions from outside, including certain pests, do to the plants. New technologies are helping us here, among other things. For example, if we know which pests cause particular problems, we can eliminate them in a targeted manner. In the meantime, there are experiments with swarms of drones that communicate with each other and specifically search a field for pests. If pests are found, the drones will in future automatically launch several ground robots which will carry out targeted treatment at the appropriate places. This sounds like science fiction to outsiders, but I expect farmers to have such fleets of drones and robots available in five to seven years.

Artificial intelligence and technology again. Agriculture is being technologized.

Yes, to a certain extent, but that is not automatically something negative. The drones, for example, will make it possible to use pesticides in a more targeted way, and no longer have to treat the whole field. Overall, agriculture is also becoming more biological. By this I don't just mean the trend towards the organic cultivation of crops. Agriculture is also playing an increasing role in the production of biomaterials for industry and everyday life. The example most discussed in public is biofuel, but there are also much smarter solutions - for example as raw materials for bio-based materials, chemicals and pharmaceuticals.

Doesn't this mean that the plants themselves have to be modified?

Of course, a key driver of progress in agriculture is to adapt plants perfectly to their environment - whether it's for the production of materials for bioplastics or for deeper roots to improve water supply. To this end, we try to identify genes that are responsible for the respective desired properties. One example: There are wild tomatoes that are enormously resistant to drought. The colleagues have identified genes - and are now trying to breed tomato varieties in this direction. Of course, the easiest way would be to simply insert the new molecular biological methods such as CRISPR, whose discoverers won the Nobel Prize this year, into the genes. But this is a very sensitive topic in Germany, people then quickly talk about genetically manipulated plants, and consumer acceptance drops. So we continue to breed plants in the classical way: we select those plant lines that have suitable genes. This is also possible, but it is quite complex and takes much longer.

Speaking of consumers: What role does the consumer play in agriculture, which is influenced by climate change?

The consumer plays a central role. They are the driving force behind the constant pressure to get more yield from less land. After all, agriculture on this planet has to feed a growing number of people, who in turn are consuming more and more - and the agricultural area has been shrinking for years. The consumer could counteract this shortage by throwing away less food. In the industrialized countries, almost 40 percent of the fruit and vegetables purchased go into the trash bin. All this was previously produced at great expense.

This is another starting point for supporting agriculture.

On October 19, 2020, the kick-off event "Agricultural Innovation and Adaptation to Climate Change " initiated by the Helmholtz Israel Office in cooperation with the Volcani Research Center for Agricultural Economics and in the presence of the Ministers of Agriculture of both countries took place in online format. During the event, the cooperation between the Volcani Center and the Helmholtz Centers Forschungszentrum Jülich and the Helmholtz Center for Environmental Research - UFZ, in the following research areas was announced

The jointly declared long-term goal is to hold workshops in 2021 on the jointly defined research areas in Israel and in Germany, thus officially extending the bilateral agreement on bilateral cooperation in the area of "Scientific-technical cooperation in the area of research on agriculture and nutrition" officially concluded between the two countries in 2012 and giving it new impetus.