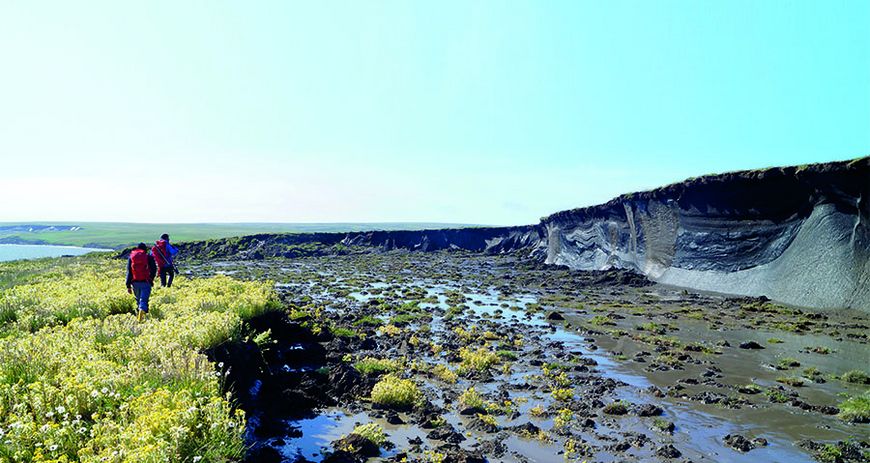 “We use the elders’ knowledge to make sense of change"

At the tip of Canada’s Yukon Territory, Hugues Lantuit studies how climate change is transforming the region. The geoscientist incorporates the experiences of local residents in his work.

It’s summer north of the Arctic Circle. Lichens, mosses, and grasses are growing; delicate wildflowers are in bloom. The Arctic tundra landscape ends abruptly where steep cliffs drop into the sea. There is no trace of the region’s iconic icebergs on the water. “We have so many false images in our heads,” says Hugues Lantuit. “When we think of the Arctic, we immediately picture snow and ice, but in my experience, the Arctic is a green place.” This green place is called Qikiqtaruk, an island in the Beaufort Sea of the Arctic Ocean—more commonly known as Herschel Island. Lantuit’s field lab is located on the island. Every year since 2006, the geoscientist from the Alfred Wegener Institute, Helmholtz Centre for Polar and Marine Research (AWI) has headed to the northernmost point in Canada’s Yukon Territory to study permafrost soils.

The soil here remains frozen for a large part of the year, with the surface only thawing between June and September when temperatures rise above freezing point. But global warming is causing deeper layers of permafrost soil to thaw. This is what troubles Lantuit, a native of France, because vast quantities of carbon are stored in the soil in Arctic permafrost regions. He investigates the impacts on the climate and the region’s economy when coastal and subsea permafrost thaws, thereby releasing carbon.

“Arctic coastal regions might sound like a niche area,” says 42-year-old Lantuit, “but a third of the world’s coastlines are permafrost coasts. And the global climate cycle is threatened when these soils thaw.” People living in the region are already feeling the effects now: Coasts are eroding and breaking away at a rapid pace, much faster than the cliffs in northern Europe, for example. And this is damaging the region’s infrastructure as a whole, with paths and landing strips beginning to crumble and buildings and power lines coming under risk if the subsoil gives way. “Repairs are quite expensive, and building work is becoming more difficult,” says Lantuit, describing the situation.

“We also look at the risks that thawing poses for infrastructure and people’s health.”

This is one of the factors behind the Nunataryuk EU project, named after the expression for “land – sea” in Inuvialuktun, the language of the Inuit in northwestern Canada. “Our aim isn’t just to understand what happens to the organic material that is released due to thawing and flows down rivers into the sea—we also look at the risks that thawing poses for infrastructure and people’s health,” says Lantuit, who has coordinated the project since 2017. Twenty-eight partner institutions work together on the project, and the team includes both natural scientists and social scientists. The project is special, because it is guided by a Stakeholders’ Forum of representatives from Arctic coastal communities—and the indigenous societies who make up a large share of the population. “The people are interested in how the fauna is doing, and fishers want to know how the coastal ecosystem is influenced,” says the AWI researcher.

Every research expedition sets off from Inuvik which, with 3,500 residents, is Canada’s largest community north of the Arctic Circle. This is where the researchers prepare for their four-week stint in the field. “Very accessible,” is how Lantuit describes Inuvik’s location, adding that it only takes two days to reach the town by plane. It seems these long trips have become par for the course for the researcher.

“The first few days in Inuvik are always set aside for organizing our field work. We do things like shopping, unpacking, re-packing, meeting people, shaking hands, carting boxes around,” his team of researchers reports back home online. There’s much to do—including inspecting their supply of hardware, preparing and freezing meals, and organizing equipment and consumables— before they finally head out to live and work in the field for four weeks. Their next stop is Aklavik, a well-laid-out village of 600 residents that has small supermarkets and a landing strip for airplanes. It can’t be accessed by road, as the settlement is surrounded by stretches of water and lakes. Small, Twin Otter aircraft are the transport of choice in this region. This is also how the researchers cover the last 200 kilometers between Aklavik and Herschel Island. The Twin Otter can only take a handful of passengers, as there are usually hundreds of kilograms of freight on board as well.

“Every morning we sit down together and reassess whether we can go ahead with the work we’ve planned.”

“Herschel Island is a very beautiful island, a very special place,” says Lantuit. It has the status of a special protection area, and old wooden buildings from colonial times have now been repurposed as accommodation and auxiliary labs for researchers. Lantuit finds that staying on Herschel is much more comfortable than it once was. He says he was still sleeping in a tent on his first expeditions 16 years ago.

Planning working days in the Arctic is a difficult task. “We’re reliant on the weather, and it can change very quickly. Every morning we sit down together and reassess whether we can go ahead with the work we’ve planned,” says the AWI researcher. At the top of any packing list for the Arctic is good clothing that protects against the cold and all types of weather. The summer sun shines late into the night in the Arctic, and the team uses every last minute of daylight for lab work.

Over the years, Lantuit has not only conducted research but also trained his team on how to defend themselves against bears, repaired boats, and “fostered good will with authorities and local decision-makers,” his team reports. And this has been key to the success of the Nunataryuk project, which relies on long-term partnerships exactly like these. How do anthrax pathogens that have been locked in the permafrost spread? What diseases emerge due to strain on the water infrastructure? What are the consequences of mercury being released? Are there impacts for marine animals? Research questions like these have been developed with the local people. Lantuit believes that achieving something similar in a short, three-year project would be “completely unrealistic.” He says the people in Aklavik are definitely very hospitable. “But it still takes time to really gain their trust—no different than it would be in a small village in Germany,” notes the geoscientist. “And this exchange with local stakeholders is what makes the project so valuable for me.” Lantuit says the dialog continues “until everyone is happy”—not just during the periods when the team is in the field, but also via phone and Facebook throughout the rest of the year.

“We’re not doing something ‘for the Inuit’; we’re working together.”

“The people here are aware of the risks, and the mayors call our attention to the issues that matter to them. It makes me realize how patronizing we Europeans can be sometimes. While it’s true that the image of people living in igloos still exists to some extent, the reality is different—there’s functioning infrastructure, Internet, well-organized communities. We’re not doing something ‘for the Inuit’; we’re working together. We use the elders’ knowledge to understand the significance of change, and we learn about the land and the landscape from them.”

If it were up to Lantuit, there would be a lot more projects like Nunataryuk. The researcher enjoys life in the camp when the working day finally comes to an end in the far north. This is when the team spends time with the park rangers, plays cards, and shares stories. Sometimes the rangers catch Arctic char, which they smoke or grill together—a change of pace from their frozen, pre-cooked meals. Every once in a while, grilled caribou is on the menu, too. Hunting this species of reindeer is a special tradition for young hunters. In total, Lantuit has spent around a year and a half in northern Canada. Above all, what touches him most is seeing the people he has known for many years, whose home is undergoing dramatic changes.

“Of course, the solutions we’re able to offer are limited, but our data can help us to classify the changes more effectively from an economic and sociological perspective.” One example is a new map that was recently published, showing the incidence of permafrost in the seabed. There are also plans to create a database on mercury levels in permafrost soils and a socioeconomic atlas that shows how many people live on permafrost and where. “No one had these figures before this,” Lantuit says. His hope is that they will make it easier to attract attention at the political level.

As a father, he doesn’t take as many research trips as he did a few years ago, but the researcher plans to visit Aklavik and Herschel Island again as soon as possible. And one thing is for certain: “We have to continue our collaboration even after the project is completed,” Lantuit says. “We can’t conduct research now the way we used to a few years ago, when we simply traveled there, collected our results, and then left again.”

Nunataryuk examines the impacts of thawing coastal and subsea permafrost on the global climate and develops targeted and co-designed adaptation and mitigation strategies for the Arctic coastal population. The EU project facilitates research and dialog across borders and includes 28 partners from Austria, Belgium, Canada, Denmark, France, Germany, Iceland, Italy, the Netherlands, Norway, Portugal, and Sweden. It is to run for five years and is set to end in October 2022.

Further information on the project