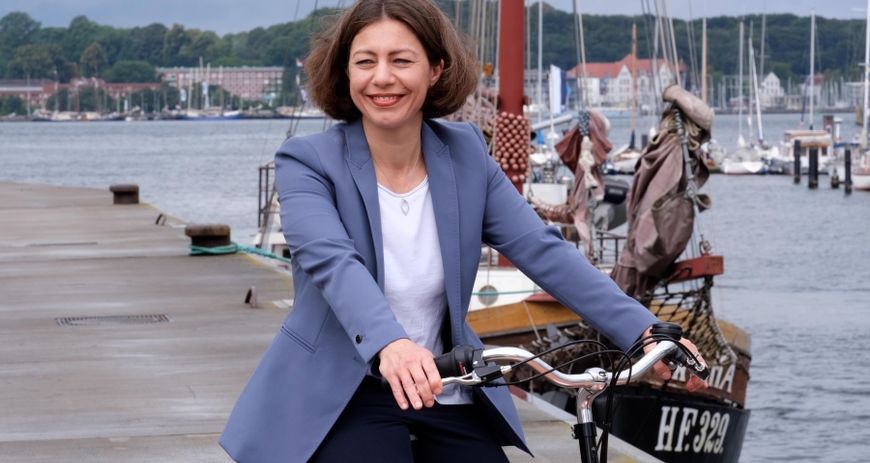 "The next ten years are crucial"

Since October 2020, Katja Matthes has been head of the Kiel Research Center GEOMAR. The sports enthusiast and climate scientist is convinced that the oceans can contribute much more to climate protection. In a pinch, they need a little help.

Her position is uncomfortable and will continue to provoke opposition. "But we will hardly manage to keep global warming well below two degrees any other way," says Katja Matthes. "Because greenhouse gas emissions are not decreasing fast enough, we need to seriously explore how carbon dioxide can be actively removed from the atmosphere." Climate engineering is the name given to such interventions, and they are hotly contested, especially in this country. They include, for example, the storage of CO2 in deep layers of the earth, known as CCS (carbon capture and storage). It is practiced in Norway, other European countries also want to use the technology, but in Germany it seems unthinkable after the protests of the past years. "For now," adds Katja Matthes. She does not want to propagate climate engineering as a panacea, but does want to ensure that opportunities and risks are weighed up without prejudice. "In any case, CO2 is in the worst place in the atmosphere."

As the new director of GEOMAR Helmholtz Centre for Ocean Research Kiel, her voice carries weight. "We researchers need to get more involved in societal debates," she says. The situation is very serious, she says: Temperatures are rising faster than the Earth has seen in millions of years, posing an extreme challenge to the environment and its ability to adapt. "I fear that large parts of our planet will become uninhabitable if we don't act decisively against it within the next few years," says the climate scientist.

There is no question in her mind that global warming is due to humanity. Natural climate variations play only a very minor role. Katja Matthes has researched this herself. Born and raised in Berlin, the now 45-year-old studied meteorology at Freie Universität and soon turned to stratospheric research.

She also earned her doctorate at the FU Berlin and went to the National Center for Atmospheric Research in Boulder (Colorado/USA) as a postdoctoral fellow. Back in Germany, she taught and conducted research at the FU Berlin and at the Helmholtz Centre Potsdam - German Research Center for Geosciences (GFZ), mainly on natural climate variations that are due, for example, to the fluctuating activity of the sun. In 2012, she moved to GEOMAR and has since continued her research in Kiel. Katja Matthes is also appointed to a professorship at Christian Albrechts University in Kiel, is an expert on various committees, and is co-writing the latest Assessment Report of the Intergovernmental Panel on Climate Change (IPCC).

"Of course, the sun's 11-year cycle, for example, with its fluctuating number of sunspots, has an influence," says the researcher, as she begins to explain what the increase in radiation does to the high atmosphere, how ozone levels and temperatures in the middle atmosphere rise indirectly, how circulation patterns change, and ultimately how one to two degrees more are measured locally at the Earth's surface. "But," she concludes, "these are cyclical variations that could improve predictability but even out over time."

Solar variations over several decades should also not be overestimated. "If you average their effect over the entire globe, it's minimal." That's why climate protection needs to be pursued much more decisively than it has been, he said. "The next ten years are crucial," says Katja Matthes in a surprisingly calm tone. She refrains from the shrill tone that some researchers also choose on this topic. She is concerned with finding solutions that are sustainable and capable of gaining majority support.

"As director of an ocean research center, I naturally see the potential of the oceans first and foremost; after all, they make up about 70 percent of the Earth's surface." They mitigate climate change by absorbing a lot of heat as well as carbon dioxide from the atmosphere. Researchers like Matthes want to strengthen this buffering effect, for example by protecting and promoting mangrove forests and seagrass beds, which bind a lot of CO2. Another option could be to bring ground rock into the sea and thus accelerate natural weathering reactions that also bind CO2 and thus neutralize it.

On paper, this looks simple, but where would the rock quantities come from and what would be the consequences of the process for the marine environment? These are precisely the kinds of questions GEOMAR is researching. "But it's not enough to do good science and make sound statements - they also have to be taken to society," says Katja Matthes. Therefore, the new director spends a lot of time talking to politicians and citizens, listening to their arguments and presenting her own. She's optimistic: "The Corona crisis showed that there's a lot of trust in science and also a willingness to change certain behaviors." If this can be transferred to climate protection, much would be gained.

At GEOMAR, some steps have already been taken. For example, business trips at home and abroad are now only made by train and the climate effect of air travel is compensated. Katja Matthes herself and her family try to live in a way that conserves resources: little plastic, little meat, geothermal heating for the house and a solar power system on the roof. She rides her e-bike as often as possible the 14 kilometers from home to the office. "It keeps me moving at least a little bit." Normally she does a lot of sports, walking on the beach to clear her head, swimming training twice a week. But because of the coronavirus pandemic, the swimming hall is closed and the new job leaves little time for anything else in the first few weeks.

Katja Matthes has set herself the goal of changing that. "No one can keep up working more than 40 hours a week in the long run; everyone needs time for family and hobbies," she says. In this respect, the science system in Germany is often still backward. Especially in the postdoc phase, the workload is enormous, and at the same time there is uncertainty about what will happen next. "We want to change that and offer our researchers a clear perspective."

Another uncomfortable position that needs time to gain acceptance. Katja Matthes is campaigning for it.