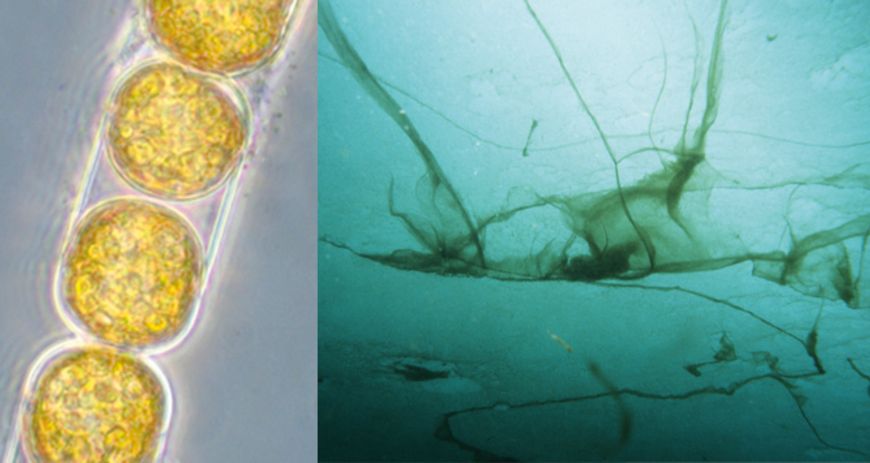 <b>Genuinely extreme</b> The <i>Alga Melosira</i> arctica is growing in the ice even at temperatures of minus 5 degrees Celsius and extremely high salt concentrations – due to its adaptation to extreme conditions, it is considered among the group of extremophilic organisms. Left photo: Madlen Franze/AWI; Right photo: Julian Gutt/AWI

The most productive algae in the Arctic

It has become a genuine celebrity in the Arctic Ocean – the ice alga (diatom) Melosira arctica. It grows and flourishes like no other life form, whether it is in or under the ice, in brine or melt-ponds.

Melosira belongs to the group of single-cell organisms and measures only 30 micrometres – a human hair is almost twice as thick. Meanwhile, the tiny tot even has its own fan club: The algae research scientists of the German Botanical Society (GBS) have selected the Melosira as Alga of the Year 2016, since it is the most important species in the Arctic ecosystem and provides nutrition for many other organisms.

The Alfred Wegener Institute, Helmholtz Centre for Polar and Marine Research (AWI) have now dedicated a research project to the small alga. Among other things, the riddle should be solved as to how Melosira is able to survive the ice cold and, particularly, the long-term darkness in the winter. After all, it is in need of sunlight to gain energy through photosynthesis. Melosira’s big entrance is in the spring: It propagates more rapidly than any other life form in the Arctic Ocean. During its spectacular reproduction phase, millions upon millions of Melosira cells string together and form metre-long chains or entire carpets that hang down from the underside of the ice. The small alga absorbs so much carbon dioxide in the process that it bears up to 45 percent of all carbon fixed in the ice-covered Arctic Ocean. Once the ocean ice melts in the summer, the algae carpets sink to the seabed where they serve as nutrition for sea cucumbers and feather stars and are finally decomposed by bacteria.

The AWI research scientists in the laboratory are using the algae to investigate the consequences of climate change upon the Arctic ecosystem: What would happen with Melosira, if the Arctic Ocean should become ice-free at some time in the future? Over a time-span of up to 150 algae generations, i.e. approximately one year, Melosira should prove whether it can also stay as joyfully reproductive, even at higher temperatures or altered incidence of light.