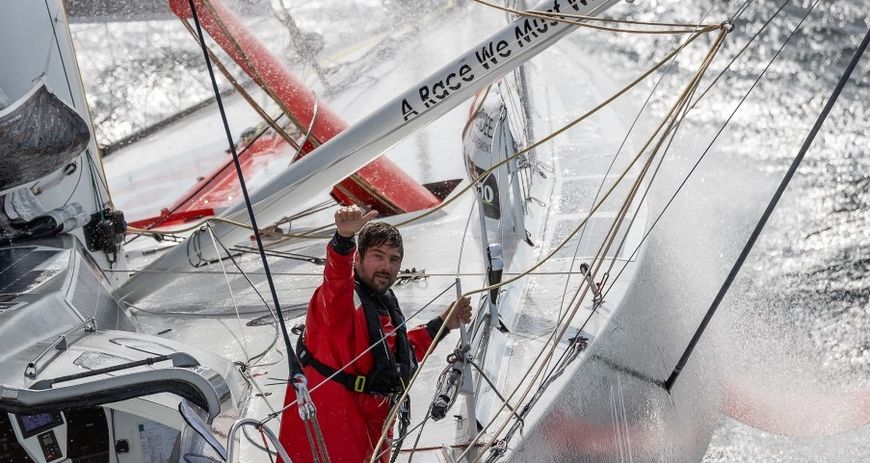 The fastest data collector in the world

Regatta sailor Boris Herrmann has installed a mini-laboratory on his high-tech yacht "Seaexplorer" - and transmits information to ocean researchers during his races. The data helps to improve climate models.

At first, Toste Tanhua had no idea who was standing in front of him. The biogeochemist had just given a lecture on his marine research in a large lecture hall at Kiel University when the man approached him. He introduced himself as a regatta sailor and spent a lot of time on the oceans throughout the year. If there was interest, he said, he would be happy to have a measuring device installed in the ship. Toste Tanhua still has to smile today when he tells this story from 2018: "I'm a sailor myself," he says, "but I really didn't recognize him at that moment." He only realized later at home that it was Boris Herrmann, Germany's best-known sailing athlete, who had just offered to work with him.

Just over three years ago, this encounter turned into a remarkable partnership: The daring professional sailor and the experienced researcher from GEOMAR, the Helmholtz Centre for Ocean Research in Kiel, have since been working together to gather data from the most remote corners of the world's oceans - and Boris Herrmann also had the small seawater laboratory on board on his two most sensational adventures: When he chauffeured climate activist Greta Thunberg emission-free from England to the UN General Assembly in New York, and most recently during his participation in the legendary Vendée Globe sailing regatta.

"At first, my colleagues thought I was crazy," says Boris Herrmann, laughing: he trims his 18-meter ship to such a minimum weight that the gray carbon fibers inside aren't even painted with white paint and his ration of astronaut food weighs no more than 200 grams per day on the round-the-world voyage - and then he installs a 17-kilogram apparatus just to collect data for science! "Three years ago, that was a very exotic thought," says Boris Herrmann, "but now climate protection and the will to contribute to it is already a much more present topic."

The apparatus: It is a box that is installed in the center of the ship and draws in water through a hose. The water enters through an opening on the keel; it is located two meters below the surface of the water so that it does not surface even in higher waves. In the box itself, the salinity, temperature and, above all, CO2 saturation of the water are measured around the clock; it is then pumped out of the ship again through another hose. "The weight of the apparatus is not even the big problem for me," says Boris Herrmann, "much more critical is that it needs a quarter of the entire on-board current."

The data from the speeding ship laboratory are extremely valuable for research. "This is information we can't get our hands on otherwise," says researcher Toste Tanhua: Above all, the carbon dioxide content of the oceans cannot be measured from satellites and, because of the power consumption, not with the help of unmanned buoys drifting through the world's oceans. The complex mini-laboratories first have to get to the inaccessible places, and the best way to do that is with racing sailboats. Similar equipment is also found on board cargo ships, but they are usually on the same routes. From there, they provide valuable time series - but no data from the areas through which the Vendée Globe passes, for example. These dreaded sailing areas are called the "Roaring Fourties" by insiders because they are located between 40 and 50 degrees south latitude. Notorious for frequent storms and high swells, they are largely terra incognita for researchers like Toste Tanhua - data from these little-traveled areas of the sea is scarce.

And why, anyway, is it important to know the ocean's CO2 levels? Toste Tanhua knows the answer to this question, and he takes us out for an explanation: The oceans help mitigate global warming by absorbing CO2 - and in large quantities: Only just under half of the emissions remain in the atmosphere. The rest is distributed to the ocean and plants on land. At the same time, CO2 uptake lowers the pH of seawater - with significant effects on marine life. "We need to understand exactly how the ocean absorbs CO2 in order to improve climate models," says Toste Tanhua. And Boris Herrmann seconds right away, "It's interesting that everyone immediately thinks of forests when it comes to carbon sequestration, but almost no one thinks of the oceans." Also to change that, he will have the measuring device on board again at his next regattas.

The adventurer and the scientist: Together for climate protection

Boris Herrmann and Toste Tanhua are a well-rehearsed team, and it doesn't take long to notice that: they pass the ball to each other in conversation, as they are used to doing in their many appearances together. They stand together on stage in front of an audience of experts, but especially in front of groups of children, for example in the context of lectures for schoolchildren at the university, in order to answer curious questions. The adventurer and the scientist, that's a crowd-pleasing combination to arouse interest in climate protection issues - but it's much more than that: the two meet frequently and exchange ideas; about sailing, but especially about climate protection. "I can get insights directly from a great scientist," says Boris Herrmann, "I envy Toste the tremendous depth with which he penetrates the subject."

During the Vendée Globe, the duo's division of labor was perfectly clear: Boris Herrmann was out on the ocean as an athlete and part-time data provider, and Toste Tanhua was sitting in front of the screen in his Kiel home during the Corona pandemic. There he feverishly followed Boris Herrmann and at the same time always glanced at the screen on which the data from aboard the "Seaexplorer" were running in real time. Toste Tanhua gradually developed a feeling for the display: If the CO2 content was particularly high, for example, Boris Herrmann was probably in the middle of a tropical storm or on the edge of a storm. "The sea is stirred up and water from deeper layers reaches the surface - and the CO2 saturation is much higher down there," Tanhua explains.

The data transmitted from the ship in real time are still unadjusted for measurement errors and other inaccuracies. "It's more about checking plausibility and being able to intervene in case of doubt," says Boris Herrmann. At longer intervals during the Vendée Globe, he also had to lend a hand himself and manually transfer the data that had been stored for days - as a large package with even more precision. Those were the moments when he often started swearing. Today, he can laugh about it again: "You have to open a big hatch below deck and make sure you don't bump into anything," he says - even in high waves. The "Seaexplorer" is often traveling at 50 or 60 kilometers per hour, "but it doesn't feel like smooth asphalt, it feels like a mogul track with three-meter-deep potholes." This wiggle requires him to disconnect a USB stick from the apparatus, plug it into a computer and then manually start the data transfer. He still shakes his head at the memory of these maneuvers: "Toste," he calls out to the researcher, "next time we really should put in a data cable!"

Such improvements are commonplace for the team of scientists. They work closely with the manufacturer of the equipment, and most importantly: they have gained some experience, as there are now several racing yachts around the world that are equipped with such elaborate mini-labs and deliver the data to a common research portal. And Toste Tanhua himself, after all also a passionate sailor - has he also installed such a device on his eleven-meter racing boat from the 1980s? Tanhua immediately shakes his head: "Most of the time I'm just bobbing around on the Kiel Fjord, so this data wouldn't really help us," he says. Suddenly, a grin crosses his face and he adds, "Besides, there wouldn't be any room left on board for my beer crate!"