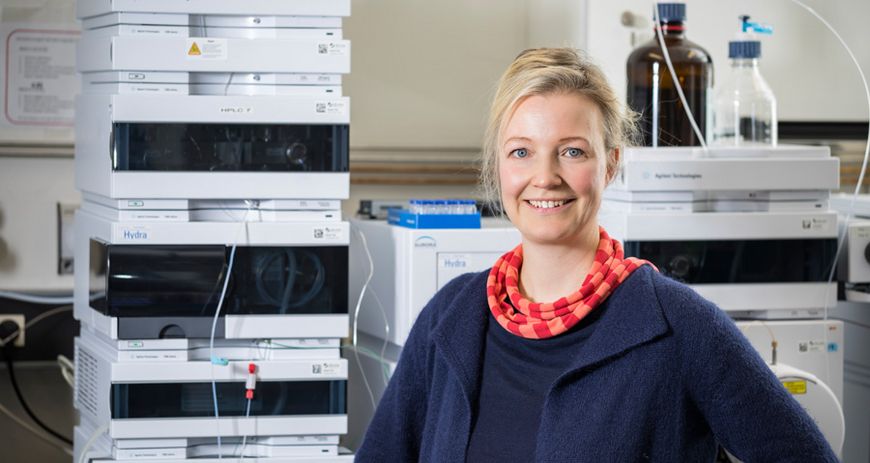 Dörte Rother has a vision: to leave behind an environment worth living in for our children. With this in mind, the biotechnologist at Forschungszentrum Jülich works meticulously on sustainable procedures to produce medicines. The principle imitates nature.

When Dörte Rother was chatting with her US research colleague Frances Hamilton Arnold at her office in Jülich, she had no idea that her visitor would win the Nobel Prize in Chemistry a few months later. Their conversation, which took place on the sidelines of a conference, was about enzymes, the dual roles of being a scientist and a mother, and their career paths. “I was thrilled when I found out that she had won the Nobel Prize in 2018,” Rother said. “She is an utterly worthy Nobel Prize winner in many respects!”

Her US colleague’s research served as an important basis for Dörte Rother’s own developments, as she also works with enzymes. These biological catalysts accelerate chemical reactions, enable body cell production, and maintain the process of digestion, amongst other things. Rother’s work group at Forschungszentrum Jülich devises and optimizes new enzymes and develops production techniques. “When people ask me about my job, I explain that I do research in the field of biocatalysis—that is to say, I use enzymes or whole cells to produce medicines or their components, ideally from renewable raw materials.” For example, waste products from the processing of corn or sugar cane can be used to produce an active substance for cough syrup.

Transforming cheap raw materials into valuable active substances in a test tube—it all sounds a bit like alchemy. But the 40-year-old researcher explains how it works nevertheless: “The added value lies in the fact that we start with basic substrates and, based on these, our enzymes produce more complex molecules at each reaction stage.”

Rother’s speciality is what are known as enzyme cascades: Various successive reactions take place thanks to a combination of enzymes. A complex active substance can thus be generated in several stages. With her co-researchers, Dörte Rother synthesizes many so-called optically active substances. These are described as “optically active” because they can rotate the polarization direction of light—such as the left-handed or right-handed lactic acids in yoghurt. One can picture them as an image and a mirror image, yet they can have very different effects in the body depending on their form. To be used as medicines, they must be ultrapure, i.e. in just one of the possible molecular forms.

“This is where biocatalysis offers one major advantage: Enzymes are nearly always more specific than chemical catalysts, which are commonly used in the industrial production of medicines.” Instead of a mixture of substances that have to be laboriously separated, enzymes produce pure substances. The waste products that come from the production of chemical substances are therefore avoided. Biocatalysis also saves energy, since enzymes work best under natural conditions. They do not require high temperatures or high pressure, and they are biodegradable.

For Dörte Rother, the ecological factors are more than just a pleasant side effect. You can hear her enthusiasm when she talks about her research. “I have committed myself to this technology because I am fully convinced that it makes sense,” she explains. “As scientists, we have a responsibility to begin sustainable research before it is already too late.”

Dörte Rother has always been fascinated by the environment. “At the age of three, I told my parents that I wanted to be a ‘billologist’,” the researcher recounts with a smile. She was inspired by her father, who was a biology and geography teacher, and by an uncle, a marine biologist who traveled to Antarctica on the ‘Polarstern’ research ship. Although other disciplines such as medicine, sports journalism, and landscape architecture also appealed to her, she decided to study biology. The young professor currently describes herself as a biotechnologist. “I am interested in the technical application of biological aspects,” she explains. And she likes working with scientists from a wide range of different disciplines; in her team, engineers, chemists, and biologists all work as one.

“Environmental factors have, however, only played a limited role in the development of traditional production methods to date,” Rother says. And since enzymes are more expensive than many conventional catalysts, they are hardly ever used in industrial manufacturing processes. This could soon change: “If social pressure or ecological necessity become sufficiently great, a rethink in terms of technology will also be initiated,” she hopes. “If, in fact, the ecological impacts were factored into the costs of the process, many enzymatic processes would already be economically competitive.”

In collaboration with partners in industry, Rother therefore aims to implement biocatalytic processes at the production level and to produce medicines, chemicals, and materials such as bioplastic in an environmentally friendly manner. “We have to think in this direction if we want to leave behind an environment worth living in for our children.” Rother would also like to pass on these issues to the next generation of students through her teaching at RWTH Aachen University. She is currently working on developing enzymes that can be activated and deactivated by light or temperature. “Our objective is to be able to accurately control the process of our reaction cascades using several enzymes in a single reactor,” she explains.

She has won numerous awards for her work; most recently, for example, she received a starting grant from the European Research Council and is being funded as part of a FET Open project (“Future and Emerging Technologies”). Rother remains modest despite all the awards she receives, as she does not see them as her own personal achievement. “If you are passionate about your work, if you are creative and promote fresh ideas, then something new may emerge—with a bit of luck this will be a good process or a product that wins you an award,” she says. The most important factor is a good working environment and a network of colleagues with different specializations.

Dörte Rother spent a period of time doing research in Stockholm. She loves the natural environment in Sweden, but she was also impressed by the people’s approach to work: “Having children and continuing to work is far more a matter of course in Scandinavia than it is in Germany,” says the mother of three, describing her experience there. This is down to good childcare, working hours that are designed to be child-friendly, and also the fact that Scandinavian parents share family responsibilities. “Here in Germany, I think meeting the challenges of working as a professor is a far bigger problem in terms of time if you are also raising children. You have to be able to work in a very organized way and your partner needs to be involved—fortunately that is the case as far as we are concerned.”

For her, the choice between “children or career” never arose. That might be due to the example given by her parents, who both continued to work after their children were born. Rother feels that the fact that she herself was looked after by a nanny after school enriched her childhood. “It taught me how to engage with people of different characters. Our ‘Aunty Anni’ had a completely different style of raising children to my parents, for example.” Today, she is pleased to see how her own children are learning to deal with the different people taking care of them and with different cultures. “Last year we had a young Argentinian girl working as an au pair in our family. It was great to see how she and the children treated each other, even though she spoke no German at all in the beginning.”

Rother finds a balance for her hectic day-to-day life through travel, either for work or pleasure. When time permits, she and her husband go on cycling trips. “In the past, I never went to the same place twice,” she explains. “Now we have discovered a wonderful place for us and our friends at a lake in Sweden—where else?” The sport that was already so important to her as an adolescent is also an integral part of her leisure activities: “My Sunday-morning rowing session is sacrosanct for me,” she says. “And incidentally, it also helps me to prepare complex proposals or manuscripts—three laps of the lake and I have the structure in my mind.”