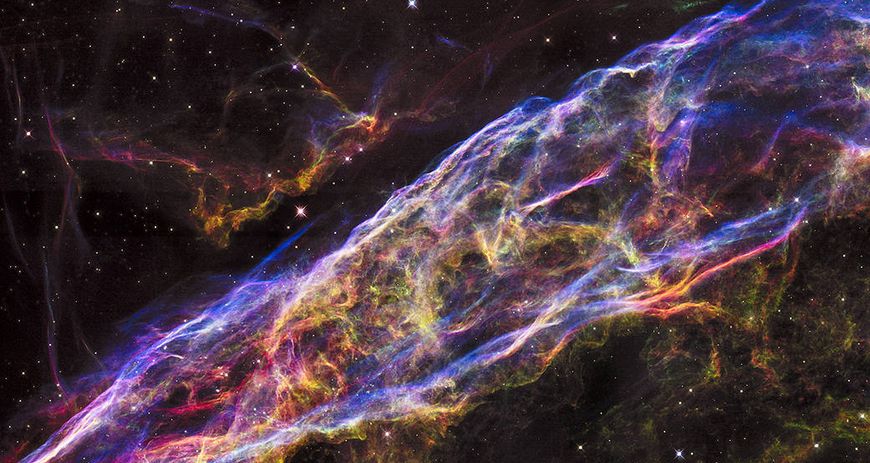 NASA's Hubble Space Telescope has unveiled in stunning detail a small section of the expanding remains of a massive star that exploded about 8,000 years ago. Credit: NASA/ESA/Hubble Heritage Team

Stardust in the Antarctic

The rare isotope iron-60 is produced by huge star explosions. Only a small proportion comes from remote stars. Researchers have now discovered iron-60 in the Antarctic for the first time. They have been able to draw spectacular conclusions from their findings.

Every year, several thousand to tens of thousands of tons of cosmic dust shower down on the Earth. Most of these tiny particles come from asteroids and comets in our solar system. The iron-60 isotope contained in these particles is particularly interesting. Natural sources of this isotope do not exist on Earth. On the other hand, exploding stars, so-called supernovae, emit large quantities of iron-60. Researchers at the Technical University of Munich (TUM), in collaboration with colleagues at two Helmholtz Centers, have now discovered iron-60 in the Antarctic for the first time.

It all started in 2015: Sepp Kipfstuhl from the Alfred Wegener Institute (AWI) was once again visiting the Kohnen Station, a container settlement located around 750 kilometers from the Neumayer III research station. Kipfstuhl was researching how trace substances are deposited in ice. A request sent by Gunther Korschinek from the TUM presented him with a welcome diversion. He was asked to collect 500 kilograms of snow and pack it in boxes. Twenty years ago, Korschinek and colleagues at TUM had already found evidence of iron-60 in deep sea deposits. It was a sensational discovery, since it led the researchers to conclude that several supernovae must have exploded in the vicinity of the sun around two million years ago. They inferred this from the depth distribution in a manganese crust taken from the ground of the Pacific Ocean, in which they found iron-60 that had been deposited on the sea bed over the course of millions of years. On the strength of this, Korschinek wondered where he might possibly find further iron-60 deposits from stellar explosions in the past as the solar system is just passing through a denser interstellar environment. This was a difficult undertaking since the fine dust from the cosmos is usually lost in nature. He believed, however, that it might be possible to detect the dust in the pure snow of the Antarctic. “So we got our spades out and shoveled snow,” Kipfstuhl recalls. Afterwards the sample, still frozen, was sent off on its long journey.

The 25 boxes were flown by plane to the Antarctic coast; from there they were taken to Cape Town on a South African research vessel and finally transported to Munich via the AWI in Bremerhaven. A team at the TUM then melted the snow and separated the solid components from the melted snow using fine paper filters.

A total of 13 filters were then sent to Helmholtz-Zentrum Dresden-Rossendorf (HZDR), where Silke Merchel was to extract the solid components from the paper using every trick in the chemistry book. “I practiced in advance with empty filters, so that nothing would go wrong during the final work on the valuable sample,” the chemist recalls. “Apart from that, I checked which elements were already contained in the filters and the chemicals we used, as the measurements to be performed later on were so sensitive that you could find everything with them.” From the total of 13 filters containing the actual sample, a colleague from Dresden sorted out obvious impurities under the microscope and they were then burned at 650 degrees Celsius. “We processed the ashes for about three weeks using traditional chemical methods, until we had obtained the few milligrams of iron needed for the subsequent analysis,” the researcher from Dresden explains. “These minute samples of iron were taken to Munich in person by a colleague from the HZDR.”

Even the filtered water was used for later analysis. It went to Jan Welch from the Atominstitut in Vienna, who concentrated it using a rotary evaporator. Following a subsequent extraction of iron-60, a sample was also sent to Munich. There, Gunther Korschinek and Dominik Koll received the samples in order to identify the extremely rare iron-60. Koll completed his master’s thesis on the analysis of the samples and is the lead author of the latest publication on the subject.

It was an enormous effort to find evidence of a few atoms. But the fact that the iron-60 found originates from supernova explosions makes it all the more interesting for researchers. This isotope is unstable and decays; every 2.6 million years the quantity originally available is halved. If iron-60 had been present 4.6 billion years ago during the Earth’s formation, it would have completely decayed by now. If evidence of this isotope is found somewhere, it must have come from space relatively recently by astronomical standards.

There are only two facilities in the world where it is possible to detect evidence of these minute quantities of iron-60; one is the Munich tandem accelerator. Here, individual atoms are counted according to their mass. After extensive analysis, Koll found no fewer than five iron-60 atoms in the filter sample. He was able to rule out that these had occurred during nuclear weapons tests or as a result of the reactor accident in Fukushima, for instance. The radioactive isotopes must originate from far-distant stellar explosions.

However, this iron-60 did not shower down on the Earth millions of years ago, as the snow collected was no more than 20 years old. It does not seem to have come from far-distant supernovae, because otherwise the iron-60 dust would have been too greatly depleted in the universe. Koll, who at the time is pursuing his research at the Australian National University in Canberra, Australia, therefore suspects the material to be of interstellar origin from a closer vicinity. Astronomers have discovered that our solar system is located in a collection of hot gas clouds. The closest one to Earth is known as the Local Interstellar Cloud, which could have been created by supernovae. “About 40,000 years ago, our solar system entered one of these clouds, which is also known as the Local Fluff,” explains Korschinek, “and will leave it again in a few thousand years’ time. “Following on from this hypothesis, material from ice cores that are older than 40,000 years should not contain any interstellar iron-60,” Koll adds. “It would be ideal, of course, if we could find evidence of the transition of the solar system into this cloud.”

For astrophysicists investigating the development of the Milky Way Galaxy, this would be a groundbreaking insight. In fact, the AWI already has such ice samples. This would enable the Institute to once again play an important role in future projects.