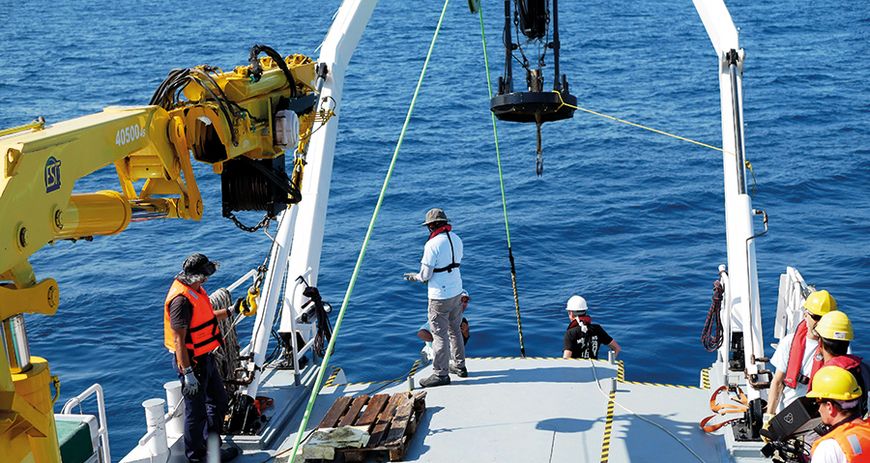 Searching for drinking water under the sea

When it comes to water scarcity, Marion Jegen is a sought-after specialist. The geophysicist from the GEOMAR Helmholtz Centre for Ocean Research Kiel works in coastal regions, using cutting-edge technology to search for fresh water stored in the seabed – for example, off the coast of Malta.

Reading statistics is one thing, getting to know the world behind these figures is something completely different. In any case, Marion Jegen was surprised when she stepped off the plane in the island state of Malta. She was expecting a secluded Mediterranean isle with a vacation atmosphere, but it was nowhere to be seen. Instead, Malta’s capital, Valletta, welcomed the 53-year-old geophysicist from the GEOMAR Helmholtz Centre for Ocean Research Kiel with the din of construction sites on every street, heavy traffic, hustle and bustle, and oppressive heat.

But this was also one of the reasons why Jegen had come to the island. Malta suffers from an extreme shortage of water caused by overpopulation, low rainfall, and intensive farming. The number of people living on the archipelago is 1,325 per square kilometer, eleven times more than the EU average. Some 1.7 million tourists also come here each year, and the number is growing. All these people need food and somewhere to sleep – and, of course, water for drinking, washing, and showering. The archipelago’s reserves of surface and groundwater are depleted to the point that just 80 to 120 cubic meters of fresh water are available to each resident per year. But calculations by the United Nations indicate that this figure should be at least 500 cubic meters to ensure sustainable development. “That’s why Malta’s government is building more seawater desalination plants in order to secure the supply of drinking water,” Jegen says. However, these plants are creating a different problem. They require a lot of electricity, which makes it very expensive to produce drinking water.

Together with her five-member team and a working group led by Maltese geomorphologist Aaron Micallef, the Kiel-based researcher wants to search for a new, untapped source of drinking water. Their aim is to track down layers of rock in the seabed that hold groundwater. These reservoirs were formed during previous cold periods, such as the ice age around 20,000 years ago.

During these periods, the polar ice sheets increased, while global sea levels sank by more than 100 meters compared to today’s levels. Consequently, shallow coastal waters around the entire world – known as shelf areas – became dry land. As rain or snow fell on these surfaces, the water seeped down into the ground and formed groundwater reserves there. When sea levels rose at the end of the ice age, the shelf regions were flooded again. Since then, the reserves of groundwater deep below the surface have been offshore. “Estimates suggest that around 500,000 cubic kilometers of fresh water are stored in offshore groundwater reserves around the world. This would be enough to fill the Black Sea and is naturally cause for hope, especially in arid coastal states like Malta and other Mediterranean countries as well as South Africa and Mexico,” says Jegen.

But where these reservoirs are located, how large they are, and whether they can be used as sources of drinking water is still relatively unknown. In order to answer these questions, which are key for Malta’s future, Jegen and two colleagues from GEOMAR, Christian Berndt and Bradley Weymer, teamed up with partners in Malta to launch an interdisciplinary joint project called SMART, which is funded by Helmholtz. The SMART team’s goal is to identify layers of rock that contain groundwater.

To do this, the geophysicist has to carry out searches of the seabed at depths of up to 400 meters. This is the depth at which the hard, highly porous limestone that stores water like a sponge is found. “We don’t just want to find out where these offshore reserves of groundwater are located – we also want to know whether they’re connected to land,” the scientist says. That’s because if a connection does exist, it’s possible that current plants used to pump groundwater on land have already tapped into reservoirs that are actually under the sea.

Jegen uses a device she calls her “pig” to help her see into the depths. That’s her name for a thick, torpedo-shaped metal cylinder that generates electromagnetic waves. The high-tech device is dragged across the seabed by a ship and is equipped with a “tail” at the back, consisting of receivers to capture the waves after they have bounced off the rock and been modified by it. “This measuring technique is called marine electromagnetics. This is the only way we can measure the electrical resistance of the substrate and determine whether the rock contains salt or fresh water based on this,” explains the geophysicist. Saltwater is highly conductive, but the electrical resistance is three times higher with fresh water. “We combine our electromagnetic data with the seismic profiles of the seabed so we can precisely determine the salt content of the water in the pores. Combining this data presents a statistical and mathematical problem, and solving it is the focal point of our work,” says Jegen before adding: “So strictly speaking, we’re more like mathematicians than geologists!” Only in passing does she mention that her working group builds all of its measuring devices itself and only a couple of other research teams in the world use this technology.

The researchers have chartered a relatively small ship for their initial measuring trips off the coast of Malta, which means that launching and retrieving the “pig” requires a significant amount of effort. The team only succeeds by enlisting the help of the ship’s cook, a bear of a man who is built like a weightlifter and lends a hand every time. Jegen is also concerned about the numerous shipwrecks and downed planes that have lain submerged off the coast of Malta since World War II, increasing the risk of the expensive measuring device getting caught on them and torn away. So the researchers keep a constant eye on the wind, the cable pulling the “pig”, and the monitors in the ship’s lab, which compile the measuring data. Jegen, who heads up the group, never sets down the radio she uses to communicate with the helmsman.

They work for up to 18 hours a day, and their days begin at five in the morning because the team’s vacation home is located an hour away from the harbor by car. But no one complains. “My group and I usually research the deep seabed and analyze methane hydrates and metal deposits there which could be relevant in the distant future,” explains Jegen. “But searching for offshore groundwater means we’re now working on a topic that has current, direct significance for millions of people. This is applied research, and it really drives us.” The team typically only goes back to bed long after darkness has fallen, returning to their accommodation on one of the long arterial routes leading through expanding suburbs and past densely built-up bays. Tourism and economic growth have come at a price. People in Malta have conflicting outlooks on this boom, Jegen says, sharing her impressions: “On the one hand, it opens up better job opportunities and offers prospects, especially for young people. But the noise, hectic pace, and demand for resources that come with it are overwhelming residents who have lived here for a long time. I found the people to be friendly, relaxed, and open. They love good food, community, and family and still put up elaborate decorations for the processions on Catholic feast days. So tradition and modernity come up against each other in many areas here.”

As far as tradition goes, Jegen enjoys Maltese cuisine in particular. “In culinary terms, the entire Mediterranean region comes together on the island. Only rarely have I enjoyed such a diverse variety of delicious food, and so much of it,” the scientist enthuses. Jegen is actively shaping Malta’s modern side – for example, by working with her SMART colleagues to provide young scientists from various countries with training in marine electromagnetics and seismology. They began by hosting a summer school in Malta that included visits from the world’s leading experts, during which they presented their methods. “After acquiring this knowledge, our young colleagues can push forward with the search for offshore groundwater in their home countries,” Jegen says.

She is planning to return to Malta herself in December 2020. Together with the SMART team, her aim on this trip will be to conduct a comprehensive search of the country’s shelf areas from on board the METEOR, a German research vessel. The scientists then want to be able to provide clear recommendations as to whether the seabed could potentially offer a sustainable solution for Malta’s water crisis by the project’s end in 2021 at the latest.