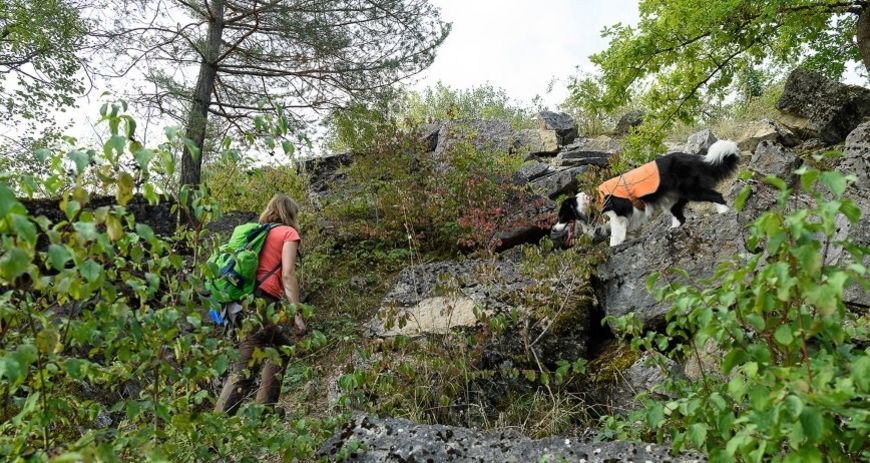 Dogs have a very fine sense of smell and are therefore increasingly used in research to detect endangered animal and plant species (Image: Daniel Peter).

More and more animals and plants are threatened with extinction. With their fine sense of smell, species-tracking dogs can often track down these endangered species better than technology or humans.

High-tech has long since found its way into many areas of nature conservation research: Today, satellite remote sensing can be used to count animal herds and map vegetation. Migratory birds such as the cuckoo or the white stork are being transmitted to learn more about their journey to their wintering grounds and back to Germany, and even bees are now equipped with mini radio transmitters because researchers want to learn more about their flight behavior. But these research methods reach their limits when it comes to finding individual specimens of endangered species. Because these are rare and often hunker down in the far corners of remote biotopes, they are particularly difficult to spot.

Researchers have not only once come up with the idea of using the fine nose of dogs to spot the animals. They then speak of species-detecting dogs. A promising approach: a herding dog has more than 200 million olfactory receptors, a beagle even more than 300 million, while humans, by comparison, have only about six million olfactory receptors. This means that dogs can often smell different odors even in the tiniest concentrations. After appropriate training, they can easily find, for example, the droppings of animals, plants, fungi or even bacteria - and this without destroying the habitats during the search.

Species tracking dogs are used for research purposes in 60 countries

To better assess the potential of species-tracking dogs for science, biologist Annegret Grimm-Seyfarth of the Helmholtz Centre for Environmental Research - UFZ evaluated more than 1,200 publications on the subject and published her findings in the journal Methods in Ecology and Evolution. Their evaluation shows that species-tracking dogs are used in research in about 60 countries worldwide. "In the U.S., New Zealand or Australia, dog use is widespread, and some working groups at universities and research institutions even have their own tracking dog teams," she says.

Research with the four-legged creatures got its start in New Zealand, where conservationists trained hunting dogs to search for nocturnal kiwis in the late 19th century. These flightless birds were severely threatened by rats, martens and foxes introduced to the island by humans. Conservationists collected the kiwis and moved them to an island where their predators had not yet made their home.

Considered one of the longest-running research projects involving species-tracking dogs, a Missouri Department of Conservation effort involved scientists studying the occurrence of the three-toed terrapin turtle for more than 25 years. Over the years, the dogs tracked 1,743 different individuals.

In comparison, the use of species detection dogs in research in Germany is still in its infancy. However, there are now a number of projects in which the dogs play a leading role: At the Leibniz Institute for Zoo and Wildlife Research in Berlin, they search for hedgehogs in the big city; at the Forest Research Institute Baden-Württemberg, they support a project on the distribution of pine martens and grouse; and at the Senckenberg Research Institute in Gelnhausen, they sniff out tracks of wolf, lynx and wildcat.

"In nearly 90 percent of cases, the dogs are significantly more effective than other detection methods."

UFZ biologist Grimm-Seyfarth also often has her border collie with her during her daily research. Currently, Zammy is helping her with the difficult search for great crested newts, which like to stay on land, for example in holes in the ground or under dead wood, in winter and outside the mating season. Previously, Zammy helped track down otter loaf, which is often a difficult task even for experts. The dog found up to four times as much loaf as humans. "In almost 90 percent of the cases, the dogs are significantly more effective than other detection methods," Grimm-Seyfarth says, referring to her study. Word of this advantage is also spreading among practitioners. For example, some planning and surveyor offices use dogs to locate birds and bats that have died at wind turbines, field hamster burrows in fields or nests of the rare dormouse in impassable terrain.

Linking the use of species detection dogs with other methods

In conservation research, Grimm-Seyfarth advocates combining the use of species detection dogs with other detection methods, such as in the search for otters: For example, if little is known about the distribution of the rare water marten in an area, the use of species detection dogs can be combined with camera traps. This allows more to be learned about individual individuals, for example, when a doe with young is on the move. If the dog has found loosings of an otter, the droppings can be assigned to individual individuals through genetic analysis, he said. "If you use several methods, the results become more accurate," says the UFZ researcher.

All breeds of dogs are suitable for species detection

She herself is again relying on the use of species detection dogs for her next research project. Starting in April, she will be conducting research in a citizen science project she co-initiated, in which citizens will be able to map invasive plant species such as the mugwort ambrosia, Japanese knotweed or the glandular knapweed thanks to the fine nose of their dogs. The data will be used to prevent the spread of invasive alien species. The incentive for participants is that they can have their dogs trained specifically for this project, almost regardless of what breed the animals belong to.

"In principle, you can train all breeds of dogs for such tasks," says Grimm-Seyfarth. The most important thing, she says, is that the animals can be motivated. Pointers and setters are just as suitable as retrievers, border collies and other herding dogs, she says. The biologist is also currently training another tracking dog: Foxy, a twelve-week-old Australian Cattle Dog. She can already train with her diligently, but she is not yet being used. The dog could only help the research in a year's time.

Publication in Trade Journal Methods in Ecology and Evolution

As one of six doctoral students, Annegret Grimm-Seyfarth was awarded the Helmholtz Doctoral Award 2019. She has already been researching the effects of climate change on vertebrates for ten years. She is currently working on amphibian species in the Leipzig floodplain, which she is able to study on land for the first time through the use of species detection dogs.