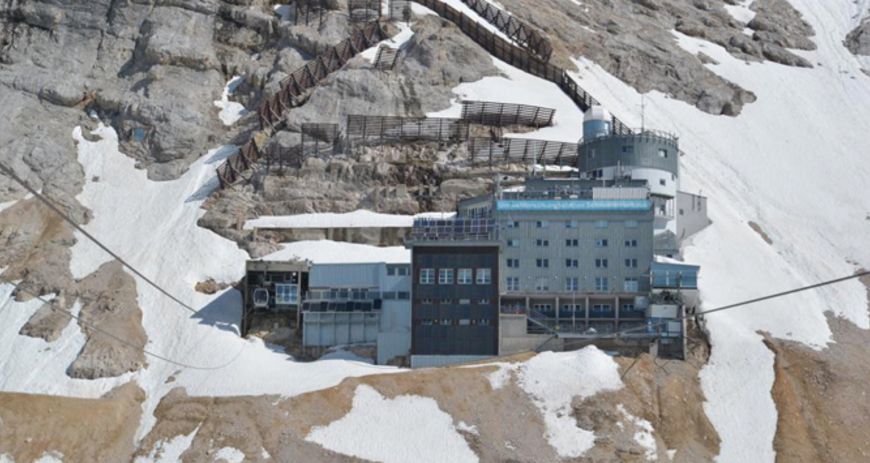 Workplace with a view: the Schneefernerhaus research station at the Zugspitze. Photo: Andreas Unger

At the very top

Research with a view

Beauty and decay are the researchers' companions at the highest workplace in Germany: the Zugspitze. They research cosmic radiation using snow in plastic buckets and a few spheres. A report

Today, Kerstin Hürkamp and Werner Rühm leave the overheated city to get to work. Soon the Alps emerge in the distance behind the southbound motorway, a grey, progressively graded silhouette. The bright green of early summer lines the road; they travel past meadows and haystacks right up to the Eibsee lake. There, a sign in Japanese and German provides orientation: Zugspitze. In the cable car, tourists take snapshots of the azure Eibsee, of the last bits of snow resisting the summer tucked away in crevices, and of themselves. "Top of Germany" says a sign and that is not the only superlative up here. After all, the Zugspitze is also home to Germany's highest beer garden, Germany's highest chapel, Germany's highest glacier. And "Germany's most beautiful workplace", as Kerstin Hürkamp remarks when looking down from the observation deck. "Like vacation", she once said to her boss, "but he did not like to hear that all that much."

The word "timeless" comes to mind when looking at the Wetterstein mountain range, but up here it is completely misplaced. Perhaps nowhere else in Germany has time left such deep traces. There is the Southern Schneeferner: a former glacier that has long since lost its accumulation zone, "dead ice". Next to it lies the Northern Schneeferner, which up until two years ago was covered with reflecting tarpaulins to slow down its melting. This has been stopped now; it is likely to have completely disappeared 30 years from now. Some snowcats are engaged in "snow farming"; they push together the snow and compact it to slow down its melting and to allow its redistribution again in winter, for when the skiers arrive.

Somehow it is befitting that, up here, where beauty and decay meet, Kerstin Hürkamp, a PhD geology graduate, and physics professor Werner Rühm likewise look into decay – even though it is of a completely different nature. They are concerned with the effects of ionising radiation on humans and nature, radiation that occurs when radioactive nuclei decay, for instance. We take a small cable car from the Zugspitzplatt up to the Schneefernerhaus environmental research station. This is a former hotel from the 1930s, its eight storeys hugging the rock. It has been refurbished and extended many times and each time has left its traces: the wood-panelled small lift, the youth hostel charm of the newly furnished bedrooms, the blue, practical linoleum floor in the laboratories, the newly laid oak floor in the conference room. The laboratory of the Helmholtz Zentrum München is on the second floor; large plastic buckets are tucked away in a corner there. Kerstin Hürkamp uses them to bring in fresh snow from the measuring terrace every time it snows. It subsequently melts and gets put into the rotary evaporator. Hürkamp is predominantly interested in the radioactive matter it contains.

When radioactive matter is contained in the air, rain washes it down to the ground – a process called deposition. Using models, one can precisely calculate how fast a certain amount falls. This is important, for example, when after the release of radioactive matter reliable information about the contamination is required within a short period. Yet what if it does not rain but snows? "So far, this was untrodden ground in the field of radioecology", says Kerstin Hürkamp. Yet snow carries even more radioactive matter to the ground than rain.

Hürkamp needs to pay great attention to detail in order to understand the process: How much snow falls in how short a period of time? What is its temperature? Where does the wind blow from? What is the consistency of the snow? The shape of the individual snowflakes is particularly important. The larger their surface, the more radionuclides they absorb. This is why Hürkamp differentiates between the crystal forms. When six-armed crystals fall, it is a "dendritic event". When more than half of the snowflakes look different, for example like needle crystals, it is a "mixed event".

Hürkamp is assisted by a 2D video disdrometer that stands on the measuring terrace of the Schneefernerhaus. This is a metallic cylinder that is open at the top and into which the snowflakes fall. They are scanned by two laser cameras offset against each other, so that each individual snowflake produces two two-dimensional images. A software that was newly developed by the Helmholtz Zentrum München analyses these images and assesses the type of snow. Using images and measured data, Hürkamp calculates the degree of contamination snowing down to Earth.

All this is important also with regards to climate change. Firstly, extreme events such as snow storms happen more often than previously and, well, they are more extreme. Secondly, snow can still fall even late in the year. "Here on the Zugspitze, we reached the highest snow depth in 2013 only as late as in early June", says Hürkamp. In other words, at a time when down in the valley the cows have been out grazing long since and the corn has been growing in the fields. If snow washes down radionuclides to the ground after a release of radioactivity at this time, it can cause greater harm. Mountain streams and drinking water can likewise be contaminated, when the first melting water flows down into the valley unfiltered.

This leads to the second questions the Zugspitze researchers pursue: What effect does radiation have on humans? Here, Kerstin Hürkamp and Werner Rühm are particularly interested in so-called secondary radiation. It originates when cosmic particles, such as a proton from space, hit other particles, such as an oxygen nucleus. This nucleus bursts and releases ions and neutrons – secondary radiation.
About half of the radiation arriving on Earth is accounted for by neutrons. Secondary neutrons from cosmic radiation can be measured at the Schneefernerhaus – not only their number but also their energy, that is, the speed at which they travel.

Rühm stands in a tiny wooden house on the measuring terrace. It looks like an extremely high and steep triangular tent. Its interior reveals why the scientists call the building the "Kugelalm", the alpine pasture of spheres: 15 white, spherical neutron detectors of varying size are mounted at half the hut's height. Each sphere registers neutrons that rain down onto the detectors with varying degrees of energy.

Every human absorbs a dose of about 300 microsievert per year due to cosmic radiation; that is about six times less than through medical applications such as taking X-rays. However, this fluctuates greatly: flight personnel are subjected to significantly higher amounts of radiation. The Helmholtz Zentrum München has developed a programme to calculate the dose absorbed by flight personnel; it varies depending on flight altitude, duration and route. The programme is used by Lufthansa and Air France, among others. Up here, the thus calculated values can be verified.

Yet in future, the results obtained by the researchers on the Zugspitze are to benefit also cancer patients. To explain this, Werner Rühm expands on the measuring of secondary cosmic radiation and how this relates to secondary radiation in cancer treatment. Protons not only radiate randomly from space, but they can be also bundled in an accelerator and then aimed at tumours to destroy the cancer cells. For instance, this is what the Rinecker Proton Therapy Center in Munich does. However, this form of treatment is also a source of undesired secondary radiation. The protons hit the tissue and in doing so extract neutrons; the same happens when cosmic radiation hits the atmosphere. These neutrons travel through the body, hit DNA and damage it. This can cause cancer, perhaps only as late as ten or twenty years after the first treatment. By now, more and more long-term survivors display late long-term damages such as secondary tumours. "The degree of risk for this to happen has come under discussion only recently", says Werner Rühm. "Yet we can actually measure the dose of secondary radiation with the methods we develop and apply at the Schneefernerhaus." The goal is to one day be able to simulate and predict the potential effects. "We will be able to quantify the risk of developing secondary tumours."

Outside on the measuring terrace, where Rühm's "Kugelalm and Hürkamp's disdrometer stand, the Wetterstein mountain range dominates the view. Sometimes, says Hürkamp, she gets up at five in the morning from her bed in the Schneefernerhaus, prepares herself a coffee, grabs a chair and waits for that special minute just before the sun rises above the summits.

When only its red rays illuminate the mountain range. Alpenglow, they call it, but that is an understatement. Actually it looks as if all was on fire. This is an event that is different to all events she and Rühm investigate in their lives as researchers, different to incidents, mixed events, radiation. It is predictable but not reproducible, has long since been explained, is actually totally trivial, almost banal. But unique. Each time newly so.

Three Helmholtz centres are represented at Germany's highest research station. The Helmholtz Zentrum München has researchers from the Institute of Radiation Protection and from the Department of Environmental Science working at the Zugspitze. Scientists from the Institute for Meteorology and Climate Research at the Karlsruhe Institute of Technology research the distribution of water vapour in the atmosphere. To do so, the scientists shoot short laser light pulses vertically up into the air and then measure in what chronological order the light is reflected by the atmosphere. On the one hand, water vapour is the most important greenhouse gas and therefore co-responsible for global warming; on the other, it contributes to the formation of clouds and precipitation, which can also have a cooling effect.

The German Aerospace Center is likewise represented at the Zugspitze: with the German Remote Sensing Data Center, the Remote Sensing Technology Institute and the Institute of Atmospheric Physics. Moreover, the Deutscher Wetterdienst (German Meteorological Service), the LMU Munich university, the Max Planck Society, the TU München technical university, the Umweltbundesamt (German Federal Environmental Agency), the University of Augsburg, the Free State of Bavaria and changing research partners work at the Schneefernerhaus.