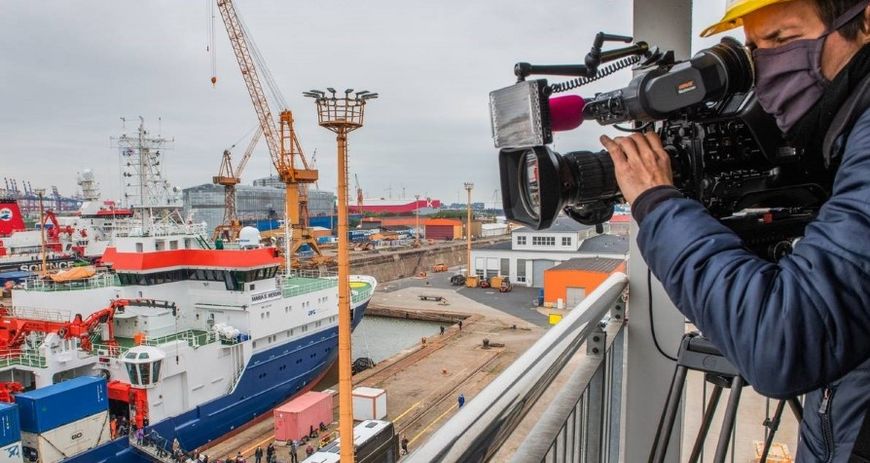 Participants of the fourth stage on board the ship Maria S. Merian in Bremerhaven. They spent 18 days in quarantine before they were able to set off on the MOSAiC expedition - accompanied by various film teams and journalists. Image: AWI/Esther Horvath

Behind the success of MOSAiC is a perfectly coordinated planning team. Curious polar bears were the least of the problems during the expedition - it was the Corona pandemic that caused the planners sleepless nights.

If you ask the geophysicist Uwe Nixdorf and the physician Eberhard Kohlberg how they are feeling right now, the answer is: "Relieved and happy". The two members of the MOSAiC planning team are relieved and happy that the largest expedition in international Arctic research to date has come to a successful and happy end.

After all, a twelve-month research stay, hibernation in the perpetual ice of the Arctic with around 500 researchers and crew members, temperatures as low as -42 degrees Celsius and curious polar bears on their necks are a challenge in themselves. But then the corona pandemic caused additional excitement in the large MOSAiC team. It threw fixed planning parameters out of kilter and pushed all those responsible to their limits and robbed them of sleep at times. "One thing is clear," say Nixdorf and Kohlberg in unison: "If we had had corona-infected people on board despite all the precautions we took, that would have been the end of MOSAiC - then the "Polarstern" would have had to make its way home before then. So there was a lot at stake.

As deputy director of the Alfred Wegener Institute (AWI), Uwe Nixdorf heads the logistics department. In consultation with the international partners involved in MOSAiC from more than 80 institutions in 20 countries, Nixdorf has been planning the logistics for the expedition through the Arctic Ocean since 2012 in meticulous detail: 50 tons of equipment alone and its transport for the research camp on the drifting ice floe had to be organized, as did, of course, the supply of food and fuel - the "Polarstern" consumed a total of 7,137 tons of marine diesel. The planning of the exchange of crew and researchers by plane and on water during the expedition also ran over Nixdorf's desk. In total, about 100 people were on board the almost 120-meter long and 25-meter wide "Polarstern" at the same time. But something was different compared to the other expeditions with the "Polarstern": The crew of the ship was reduced by a few people - in favor of accompanying staff members who were responsible for the commissioning and maintenance of the Remotely Operated Vehicle (ROV), the Autonomous Underwater Vehicles (AUV) and the snow caterpillar for the construction of an aircraft landing strip on the floe.

"If we had had corona infected people on board despite all precautions, this would have been the end of MOSAiC".

During the more than 300 days of research on and on the 8.75 square kilometer ice floe, half a dozen of the expedition members were always on duty as polar bear guards to warn the camp researchers in time. This obviously worked well: "There were no negative incidents, neither humans nor polar bears were injured," says Nixdorf.

However, the effects of the Corona pandemic on the supply and on the planned six exchange trips and flights caused the crew and researchers all kinds of headaches. Instead of six exchanges, there were only five due to corona, which in turn forced some of the researchers gathered from all continents to stay on board the "Polarstern" almost twice as long as originally planned.

Nixdorf emphasizes: "Without the support of our Russian colleagues in particular with their research vessels, neither the docking at the ice floe nor the supply of the "Polarstern" with food and fuel supplies or the planned exchange would have been possible". The Russian colleagues helped when the actually planned operations of Swedish and Chinese supply ships were cancelled due to corona conditions and for the same reasons a flight from Spitsbergen in Norway planned for March could not take place.

Besides the Russian ships "Akademik Fedorov", "Akademik Tryoshnikov", "Admiral Makarov" and "Kapitan Dranitsyn", the German research ships "Sonne" and "Maria S. Merian" also supported the "Polarstern". They set off partly from Bremerhaven. But because "Sonne" and "Maria S. Merian", for example, are not icebreakers and could not reach the floe, "Polarstern" had to interrupt her drift for one month, leave the floe and sail towards the other ships as far as Spitsbergen.

The corona pandemic demanded strong nerves not only from the logistics experts, but also from Medical Officer Eberhard Kohlberg of the AWI. Kohlberg was responsible for the thorough health check that all expedition participants had to undergo. The certificates of the foreign participants were also placed on his desk for examination. "Under normal conditions, pre-existing conditions such as diabetes or cardiopulmonary diseases are already a criterion for exclusion from participating in such a long expedition," says Kohlberg, who himself spent the winter at the Georg von Neumayer Research Station in Antarctica several years ago.

Strict corona measures were added from spring 2020. The first few months of the pandemic were particularly complicated, during which it was often uncertain whether and how expedition participants from Asia, New Zealand or the USA would even reach Bremerhaven. Without exception, all the scientists who were to be brought to the "Polarstern" for exchange had to pass through the eye of the needle in the quarantine in Bremerhaven. Twice between spring and summer a complete hotel was "chartered" for this purpose, all participants spent two weeks isolated in their hotel rooms and were tested for COVID-19 three times during this time. Afterwards a thoroughly disinfected bus brought them on board of "Sonne", "Maria S. Merian" and "Akademik Tryoshnikov".

And if there had been another case of illness? "Polarstern" has a sick bay with medical equipment and with possibilities for isolation of individual patients. In addition, a doctor trained in surgery and a nurse are permanently on board," says Kohlberg. The onboard doctor has basic dental knowledge, so that even the odd badly aching tooth or crack in an inlay can be treated. There is a telemedical connection to the Reinkenheide Clinic in Bremerhaven via satellite. This allows the onboard doctor to contact colleagues at any time and transmit the patient's findings and data online. Even an anesthesia monitoring is possible in this way.

Behind MOSAiC, besides scientific excellence, there is also a logistical tour de force. 20 to 30 colleagues were involved in MOSAiC planning on the AWI side, on land in Bremerhaven and on the "Polarstern". A total of about 300 people worked in the background to make the expedition possible. It cost 200,000 Euro per day to keep MOSAiC running smoothly - the two necessary quarantine runs in Bremerhaven alone cost about 150,000 Euro each.

For Uwe Nixdorf, head of logistics, the success of the expedition and the good international cooperation is once again proof that national borders and political conflicts in the scientific community play no role: "What counts is the joint work on a globally relevant topic - research into climate change.

Camera teams of the UFA document the expedition from the beginning. On November 16th, the documentary "Expedition Arctic" will be broadcast on ARD.