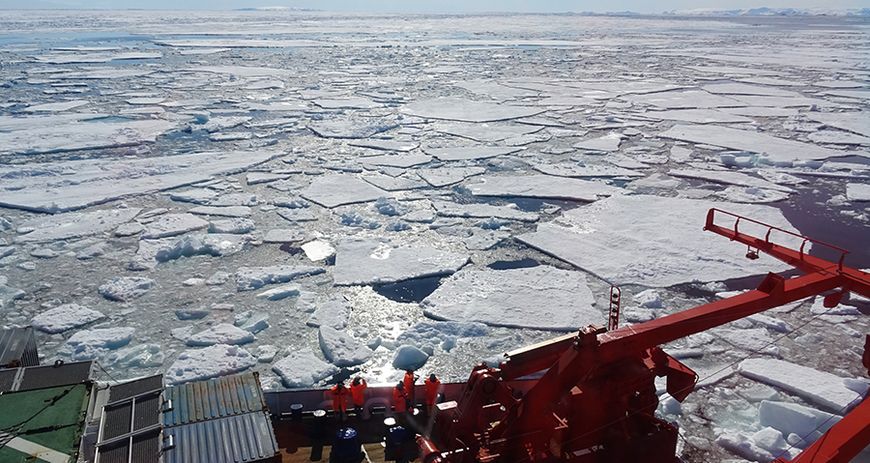 The Fram Strait, a remote sea area between Greenland and Spitsbergen There, Hanna Joerss has proven that the Arctic Ocean is becoming a source of pollutants. Picture: HZG/Hanna Joerss

The rapid loss of ice in the Arctic is causing scientists particular concern about its effects on the global climate system. It is now becoming apparent that the melting of the ice is also releasing pollutants that were bound in the ice.

The researchers pack up in a hurry. Sensors and sample device disappear into transport boxes. Just in time. Just one day later, the crunch is loud - on July 30 this year, the base of the largest Arctic mission to date breaks apart: docked to the MOSAiC ice floe, the icebreaker Polarstern has been drifting along on its journey for exactly 300 days, 1,700 kilometers from the Laptev Sea past the North Pole to Fram Strait. A research voyage that has shown, among other things The ice in the north is melting faster and faster. Especially in the Siberian Arctic, temperatures are remarkably high this year. This is one reason for rapid melting in the eastern Arctic, but not the only one. "The speed of ice drift also plays a role. Winds and currents are driving it enormously this year," says Professor Christian Haas from the Alfred Wegener Institute Helmholtz Centre for Polar and Marine Research (AWI), which is leading the ice floe mission and its follow-up studies.

In fact, the so-called MOSAiC floe from the Siberian Sea via the Pole to Greenland and Spitsbergen took only a surprisingly short ten months. "With such mobility, the ice off the Siberian coast can hardly age and it remains comparatively thin. It then melts faster and can no longer reach the transpolar current with which it would drift further north. Until now, researchers have only been able to study the different energy flows and their effects on the ice by remote sensing via satellite or airplane. The MOSAiC mission has now made it possible for the first time to measure the underlying processes directly above and below the ice surface.  Which factor of the energy balance causes what and how strongly? "For the time being, it is not possible to weight this, I would not put one factor above the other," says Haas. "But we have obtained a lot of data, which we are now analyzing for the different balances and feeding them into the climate models.

That this is not only about the climate was recently shown by another study that had nothing to do with the MOSAIC mission. Because the ice has trapped pollutants that are now being released again. In 2018, the water in the Fram Strait was sampled and analyzed for 29 specifically selected substances: perfluorinated and polyfluorinated alkyl substances, or PFAS for short. This abbreviation stands for a total of more than 4,500 different substances that are chemically stable under the influence of heat or light and are also water- and oil-repellent. The latter makes them interesting for industrial use. They are therefore extremely present in our everyday lives - from coated rain jackets to cookware, paints and carpet care products to fire-fighting foams. "Of most of the several thousand PFAS, only that they exist is known, but not to what extent they are actually used and in circulation. Some of them are banned today. "We have analyzed the known, already regulated PFAS as well as their substitutes for which reference standards are available," says Hanna Joerss from the Helmholtz Centre Geesthacht for Materials and Coastal Research (HZG) about the selection.

"We must understand that under certain circumstances the Arctic is no longer just a sink for pollutants, but also a source"

The fact that these connections can be found high up in the north does not surprise them further. "We expected them there. In the end, they only need a few years to reach the north via the water streams. Through the air, it can even take weeks or months.

Something else has astonished: the big difference in the concentrations in the water. The water that flows into the Fram Strait near Spitsbergen contains much less PFAS than the water that flows out near Greenland. And the latter is enriched with the melt water of the Greenland ice. The characteristic composition of the different PFAS in the outflowing water, however, indicates that a larger proportion comes from atmospheric sources than in the inflowing water, in which transport with ocean currents plays a greater role. Nevertheless: "We must understand that under certain circumstances the Arctic is no longer just a sink for pollutants but also a source. To what extent and under what conditions exactly, still needs to be researched.

Now, after having left the MOSAIC floe, Polarstern is collecting previously abandoned autonomous measuring stations. The scientists are also taking additional samples in the ice margin. Then they head back north into the ice to study the freezing in autumn. "This stage is just as exciting as the journey with the floe before," says Christian Haas. "For example, the mechanisms between the thawing caused by warmer water flowing under the ice and renewed freezing are not yet fully understood. One new question among many. So the expedition MOSAiC continues and with it the search for new models of Arctic processes - even though the plaice of the same name is history.