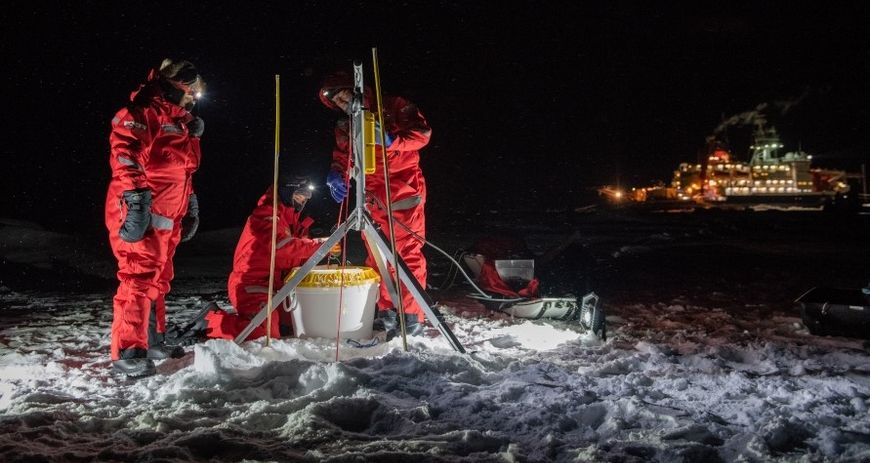 It was the grand finale of the MOSAiC expedition: After one year the research vessel "Polarstern" returned to Bremerhaven. About 500 people from 20 nations were on board in several stages. Frozen in a floe, they drifted around the North Pole.

The kiss of an arctic fish, three months of darkness, crunching ice, a beautiful and awe-inspiring landscape and polar bears in the wild: These are memorable memories that the researchers of the MOSAiC expedition bring back home. Weeks or months away from home on a research icebreaker, this has made the very different people from 20 nations into one big team.

All participants arrived with their own preparations, questions and experiences. Pauline Snoeijs Leijonmalm, Professor in Marine Ecology at the University of Stockholm in Sweden, spent eleven weeks on the "Polarstern" and four weeks on one of the Russian icebreakers, which regularly called at the research vessel for supplies and team changes. She led two research projects - one on fish and one on the metabolism of certain microbes in the ice. "I was amazed at the sounds the ice makes when a ship is frozen," says the Swede, who had previously completed other Arctic expeditions. "It was so loud, so variable and so different from anything I had heard before." The most beautiful moment on board was when she kissed an Arctic fish. "He was actually on the ice - the first fish we caught!"

Jessie Creamean from Colorado State University in the USA took part in the MOSAiC expedition for four months. She was thrilled by both the strong community and the unique nature experience: "The days and weeks were incredibly busy collecting and preserving the valuable samples," says the scientist from the Atmospheric Research Department looking back. Her main focus was on the study of aerosol-cloud interactions - in doing so, she was pursuing a very interdisciplinary approach: "My projects are thematically located between the atmosphere and the sources of atmospheric particles, which serve as seeds for the formation of cloud ice, which in turn originates from ocean and sea ice biology. It was a great international and interdisciplinary team effort".

Networking, new cooperation, media attention and public relations are valuable practical benefits of the trip for her, but what impressed her most was nature itself: "As an Arctic researcher, I am dedicated to understanding how fast the Arctic is changing and why. It was amazing to see the drastic changes in the thickness and cohesion of the sea ice in person - in the isolated, dark and remote high Arctic. It was breathtaking."

It was not his first Arctic expedition that Gunnar Spreen has now completed. The head of the section "Remote Sensing of the Polar Region" at the University of Bremen was already on board on the first leg of the MOSAiC expedition and also participated in the last one. The focus of his work was the measurement of the interaction of sea ice with microwave radiation. "This may sound rather abstract," he notes and explains: "But if we understand and model these processes better, we can derive specific information about the sea ice and the Arctic climate system from satellites. For example, about the depth and thickness of snow and ice, which influence the flow of heat from the ocean into the atmosphere". The data collected by him and the other scientists would help to better quantify these changes through satellite observations.

So many days on one ship with very different nationalities - isn't that difficult? "Nationalities are certainly not crucial for interaction with different people. We worked together very well," says Spreen. Challenges for the experienced expedition participant were more likely to be on the ice itself. "We were always aware that it would be difficult to maintain an intact camp for a whole year on the ice, which in the end was much younger, thinner and more dynamic. However, the fact that our camp would be damaged by cracks and ridges, which regularly form even in the middle of winter, took me somewhat by surprise". Measurement strategies had to be adapted and the warehouse structure had to become more flexible. The deformation of the ice was also the most impressive experience for him. "Within a few dozen minutes, ridges formed in front of our eyes, and the sound that ice can make is amazing."

For Lauriane Quéléver from the Institute for Atmospheric and Earth System Research at the University of Helsinki, it was her first trip to the Arctic - and she returned enthusiastically. "The central Arctic Ocean, a rather unusual place to experience, showed itself in all its beauty and majesty, but also in its darkness during the winter months," enthuses the doctoral student. It was above all these unique experiences of nature that helped her to get through this time. "You can see the most beautiful stars, the purest snow and, if you are lucky, the most majestic animal on earth!".

Together we give everything for science
During the expedition, Quéléver took care of an atmospheric measurement container at the bow of the ship and at the same time supported the measurements of the colleagues from the British Antarctic Survey for aerosol sampling. "By sharing our knowledge with the scientists on board, we came to completely new conclusions. And now we are working together on successful scientific publications! She was particularly impressed to see the efforts made by all participants to make the best possible measurements under such harsh conditions. She said that people are exhausted, but they give everything they have to science. "I loved sharing experiences and having the opportunity to help on the ice field. There, further away from the ship, one gets lost under the brightest stars."

Camera teams of the UFA documented the expedition from the beginning. On 16 November, the documentary "Expedition Arktis" will be broadcast on ARD.