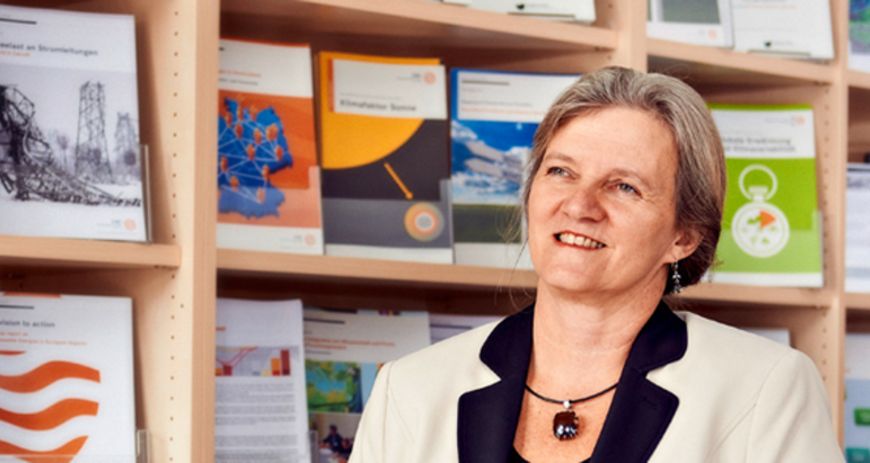 “I would like to see an improvement in support for the 2 degree target.”

Starting November 30, heads of state and government leaders from all over the world will make a renewed attempt to agree on binding targets for climate protection – this time at the 21st United Nations Climate Change Conference in Paris. Achievements from previous summit meetings have been rather modest. Will this change now? An interview with meteorologist Daniela Jacob, Director of Climate Service Center Germany at Helmholtz Geesthacht:

Frau Jacob, the next climate summit is scheduled for the end of November in Paris. Their goal is a new climate agreement. The 195 participating states seek to agree on self-imposed yet binding rules for the reduction of their CO2 emissions. Would international climate diplomacy fail irrevocably if this agreement were not reached?

I find every joint agreement made regarding climate protection to be important. Of course, it would be nice if we had a contractually-binding agreement with a compulsory nature. But even then, it doesn’t necessarily mean that everyone would stick to it. And making no agreement at all instead of a voluntary one would be a wasted opportunity. Moreover, I’ve also been seeing good development in the build-up to the climate conference: various nations such as the USA and China are beginning to re-position themselves. This means that now there is discussion concerning what is possible and what is not. That is still better than not speaking at all. Whether the negotiated targets, regarding the velocity of currently-observed climate change, are implemented quickly enough and then take effect as well – this remains to be seen. At least we have a common basis once again, from which we can continue to work – that had been lost for a while.

Large developed nations such as the USA, Russia or Japan are – evidently for no particular reason – alternately exiting and re-entering the climate agreement. And in the meantime, worldwide CO2 emissions continue to increase. So what purpose do these agreements have at all?

I find that it’s important that the governments are talking about climate topics at the highest level and are trying to reach – as much as possible – an agreement in this regard. Here at the Climate Service Center, I have a lot to do with decision-makers from the areas of economics, administration and society and realise again and again how – in order to save CO2 – plans for action taken by certain enterprises can only be implemented when they can refer back to such agreements. Whether or not the breadth of participants and the voting processes concerning the exact wording of the agreements in the climate summits make any sense in this form – I really don’t know. But I do believe that we would have made even less headway on climate protection without these summits.

What do you personally hope will be achieved at the Paris summit?

I would like to see an improvement in support for the 2°C target. We have been hearing more and more in the meantime that we won’t be able to stay within this limit. This is why I hope that there is yet another clear reference made here as to how important it is that we attempt to contain the increase in average temperature within approximately two, two-and-a-half degrees by the year 2100. This is because if we keep the emission of greenhouse gases at the current level, this limit of 2°C could already be reached as early as the middle of this century. There are new research results from the Project IMPACT2, coordinated by us, that specify what repercussions would emerge in Europe due to temperatures rising by 2°C.

And what are they?

Climates in Europe are going through regional changes that are quite disparate. In central and northern Europe, precipitation and evaporation are increasing, but in the Mediterranean region they are decreasing. The risk of flooding is rising in large parts of Europe, while droughts in the south will increase. In the summer months, crop yields in the Mediterranean region will recede, and conversely, in the higher regions of northern Europe they will even increase, whereby the overall yield there will still remain low. And the ski regions, especially in Austria, will have to expect economic losses. With a temperature increase that is markedly higher than two degrees, it would be accordingly harder to deal with the consequences. This is why I hope that this target will be confirmed once again in Paris. Furthermore, I hope that the African and South American nations will come into the spotlight more at the summit, because the consequences from climate change will impact these countries much more dramatically than our nations in Europe.

When it comes down to actually doing something to combat climate change, the players involved typically like to ‘pass the buck’. Then the claim is made that the politicians have to do something, industry has to become more environmentally friendly, or research scientists have to provide more precise data. So now who has to make the first move?

All of them at the same time! In their last report in 2014, the Intergovernmental Panel on Climate Change (IPCC) unequivocally presented that the climate is in fact changing, and that an essential portion of this is induced by humans – especially due to the emission of harmful gases. The facts are clear. Everybody has to start with themselves now.

Are there a few simple things that each one of us can do to counteract climate change?

Yes, of course: save as much energy as possible! This does not mean that, now and again, we are not allowed to indulge ourselves a bit. I don’t think it’s a good idea to try to put the citizens off the idea of taking a holiday flight based on climate justifications. But there are other areas in which we could make enormous savings. For example, I find that it’s shocking how air travel is taken for granted for mid- and high-level management when they need to have short meetings of only two or three hours to discuss some things that could have been clarified just as well through other media. We absolutely need to reconsider whether the mobility that we have grown accustomed to within the professional arena actually makes sense, and whether we couldn’t simply make much more use of media such as video-conferences. I think that it would be possible to easily save two-thirds of the costs for conferences. At the same time, the individual is expected to turn off all unnecessary lights at home, avoid heating too much and use the bicycle to fetch a loaf of bread. All this is well and good, but methods for lowering flight mobility at the workplace, in particular, haven’t even come up for discussion yet.

It’s not true that all consequences from climate change are negative: not only the atmosphere is warming up – but the subterranean layer as well, which could be used for geothermic purposes. Central European farmers could profit from rising food prices, because their harvests are supposed to be stabilising in the near future. And where else could we cultivate agricultural plants? Are advantages and disadvantages perhaps cancelling one another out?

The negative consequences are now distinctly predominant on the large scale. But it also depends on how severe the warming process turns out; if we level off in the two-degree range, our adaptive measures to the changes will be more readily managed, as compared to the scenario with severe warming. If the temperatures were to rise by six degrees, for example, entire regions would become inhabitable, such as the Mediterranean region, where it would simply become too hot and there would be a lack of water. Of course there will be individual regions that profit from the warming, such as the Baltic Sea area: If temperatures rose a few degrees there, it would be good for tourism.  And if temperatures were between 45 and 48 degrees along Lake Balaton in Hungary or the Mediterranean region, holiday-makers would be more inclined to travel to the Baltic Sea. But in comparison to worldwide changes, these are just modest regional advantages, and they certainly won’t balance out formidable problems such as world nutrition and water supply.

The public sometimes gets the impression that climate research is and imprecise science – if CO2 values or an ocean current have to be adjusted once again, the climate model will produce an entirely different future. Is it really so difficult to determine the proper values?

We are of course not able to measure future climate change, so we have to calculate it somehow. Models are used for this purpose. We can only set up an if-then relation that means, for example: If we are successful in reducing of the harmful-gas emissions to a certain level, then the climate will be able to develop in this or that manner. But we can never predict the climate precisely, because there is just too much that we don’t know – such as the development of the world’s population, the economic growth, the quantity of volcanic eruptions or how we will change the land surface. These parameters can only be estimated by us. But all climate models result in warming of the earth by the end of this century. How high that will actually be depends on all of these conditions. Therefore, we are only capable of indicating a possible scope.

No, I don’t think so. The nuclear energy phase-out appeared very quickly, so that at the moment we are in a transitional phase in which we are forced to fall back once again on fossil fuels. Over the long term though, it was the right decision. In reference to climate change, a slower phase-out in nuclear energy and quicker switch to renewable energies would have been better, but that would have been much more difficult to implement. I think that this transitional phase will not harm the climate to the degree that we would conclude that we shouldn’t have initiated it. And there is still gas so that we are not forced to expand coal consumption so much.

Do you believe that Germany has the proper preconditions to be able to implement large-scale wind, sun and water-energy projects?

I am not an expert in this area, and am not able to quote numbers concerning the potential, but Germany has both the technical know-how and large sections of necessary infrastructure to be able to make the transition to renewable energy. It is actually more an issue of the will to do it, and of course it takes some time. But I don’t see any reason why Germany wouldn’t be able to meet a large portion of its energy requirements from renewable energies. Much of this could be generated right here in our own country, through wind and solar facilities for example, but it is only possible overall within the European alliance. This is why I hope that the climate summit in Paris will also be based on a clear signal for rejuvenated application of renewable energy.

Daniela Jacob (54) is Director of the Climate Service Center Germany (GERICS), a facility of the Helmholtz Centrum Gaesthacht (Centre for Materials and Coastal Research). The GERICS is the contact partner for all queries dealing with climate change and makes itself available as an information and consultation platform to decision-makers from politics, economics and to opinion-makers in public awareness. Jacob studied at the Technical University in Darmstadt and was awarded her PhD at the Meteorological Institute at the University of Hamburg. Moreover, she developed the scientific computer model REMO, which can calculate regional climate scenarios.