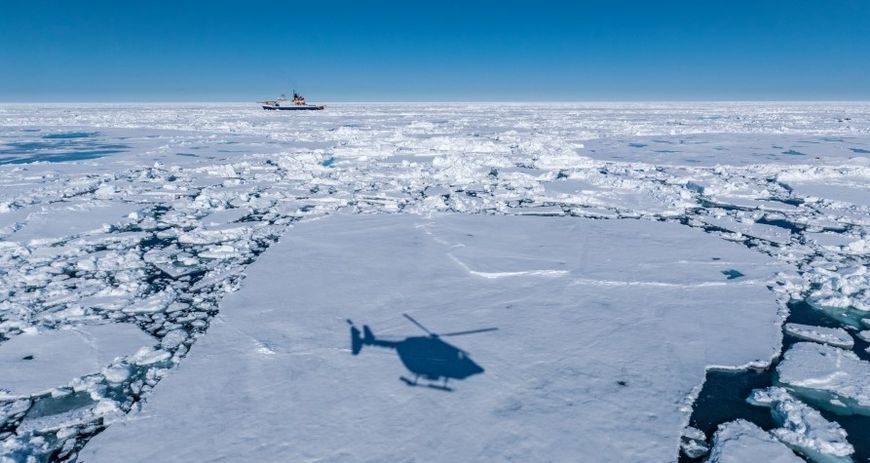 Scientists from 20 nations have frozen themselves in the ice of the Arctic Ocean and drifted with the ice masses over the sea for a year. On the MOSAiC expedition, they explored the North Pole region from every conceivable perspective at every time of year - and brought back insights that no one had ever gained before.

For most people, the first look out of the window in the morning offers few surprises. The weather is about as announced. Perhaps the tree in the garden bears first blossoms or at the house opposite a scaffold rises into the height, but otherwise everything looks like the day before. At the North Pole, there is no such reassuring certainty: The participants of the MOSAiC expedition were always able to enjoy new panoramic views in the morning on the bridge of the research icebreaker Polarstern: when a metre-wide crevice in the ice opened directly in front of the bow overnight, when a violent storm pushed this same crevice together a short time later to form a mighty ice ridge, or when parts of their research camp drifted away to a barely accessible location. As difficult as the Arctic makes their everyday life, they had come here to research exactly these phenomena that otherwise occur in secret during the polar night.

Never before has there been such a large research expedition to the Arctic. Frozen in the Arctic sea ice, 300 scientists spent more than a year on the icebreaker, divided into five stages. They set up measuring stations on a 2.5 by 3.5 kilometer ice floe, which they linked with paths for snowmobiles and power lines to create a real small research city. They distributed some of the foothills of their settlement within a radius of 50 kilometers for autonomous measurements. Six other icebreakers and research vessels ensured the expedition's supplies and crew exchange.

They experienced the preliminary final at the end of July 2020, when they were only a few kilometers from the open ocean. "Under a loud bang, our floe broke into many individual pieces. It carried us 1,700 kilometers through the Arctic Ocean, from the Laptev Sea past the North Pole to Fram Strait. This is where it now ends its natural life cycle," atmospheric physicist Markus Rex recalls that moment when the world of snow and ice dissolved around it. The scientist from the Alfred Wegener Institute, Helmholtz Centre for Polar and Marine Research (AWI), heads the MOSAiC project and was on board for most of the expedition himself. It has been more than 300 days since he took his first steps on this ice floe to explore it with a small team.

"Put simply, it's like finding a mechanical watch and trying to understand in detail how it works.

It was one of the last occasions on which such an expedition is even possible: no other region of the planet heats up as fast as the Arctic. At the same time, the region around the North Pole is an almost blind spot in climate research. There is hardly any measured data, especially from the winter. The MOSAiC expedition will now change this. "Put very simply, it's a bit like someone finding a mechanical watch and now trying to understand in detail how it works," says Markus Rex: "It's not particularly surprising what's inside the watch case. But how do all the gears, screws and hooks work together so that the watch finally shows the time? And what happens if one of these parts behaves differently than usual? Only those who understand this can later reproduce a watch themselves.

That's exactly what MOSAiC was all about - except that the scientists didn't want to copy a clockwork, but rather see through the climate system of the Central Arctic. They measured a total of 100 parameters, and the technical effort involved was enormous: tethered balloons were used, diving robots, laser beams, drones, electromagnetic sensors, satellites, a 30-meter-high measuring tower and underwater probes. They recorded the vertical heat balance along the drift route and measured how energy in the form of light and heat radiation spreads, supported by the smallest turbulence in the water and in the air. They have determined how heat from the ocean is conducted through the ice and snow and warms the surface. Their measurements range from the 4,000 meter deep ocean floor to 35,000 meters high into the stratosphere. They have recorded how the clouds interact with the light of the sun. They have observed life in the Arctic Ocean. And they have studied what happens when the layer of ice and snow cracks.

Every few months the scientists took turns to solve this mammoth task. One of them is Stefanie Arndt from AWI, who arrived at the ice floe with a Russian supply icebreaker at the end of the polar night in February to study the properties of the snow. While the sun slowly moved back up the horizon, Stefanie Arndt walked a fixed distance across the floe once a week. Using a snow probe, she measured changes in snow thickness every two meters along the way. Once she came across tracks that must have been left by the first research team that set up the research camp in the fall. The tracks were still clearly visible, although it had snowed repeatedly since then. "When snow falls up here, it doesn't seem to spread evenly over the area," concludes the scientist, "but it is immediately spread by the wind and accumulates where there is a particular topography - on the ridges of ice or on fresh ice surfaces in ice channels. No one had ever observed this before in the Central Arctic winter".

It is one of many observations that should make climate models more accurate, because until now scientists have only been able to measure snow thickness locally in summer and have relied on autonomous snow buoys in winter. But they have always deployed their buoys on a flat surface. The data transmitted were therefore not representative of the snow volume in an Arctic that is increasingly characterized by a dynamic topography rather than flat surfaces. Stefanie Arndt also saw what this dynamic means when she helped steer an underwater robot twice a week. Equipped with cameras, it allows impressive views under the ice floe. "Even in places where the ice on the surface is flat, entire cave systems form on the underside. They look like a moon landscape that has been turned upside down," says the Bremerhaven scientist. Small crustaceans, jellyfish, fish and once even a seal swim past the cameras. Even on polar night, the Arctic Ocean is alive.

"For me, one of the central questions is how deeply the ecosystem sleeps during the polar night and what it needs to wake up with the return of light afterwards".

A few hundred meters away from the diving robot, Clara Hoppe worked in the part of the research camp that the scientists have named Ocean City. Through a hole in the ice, the AWI biologist regularly tapped samples from the ocean with a water scoop. Her attention is focused on algae, which are too small for cameras, but whose importance is enormous. "Algae in the ice and in the water are the only primary producers in the Central Arctic," says Clara Hoppe. That means they use sunlight and engage in photosynthesis. In this way they produce new biomass from inorganic substances. "In this way they form the basis of the entire food web in the North Pole region. Crustaceans, fish, seals and polar bears all ultimately depend on these algae," says Clara Hoppe. She has been studying microorganisms in the waters around Spitsbergen for many years. But nobody knows for sure whether the organisms are really there all year round or whether they are regularly driven up there from the North Atlantic. In the Central Arctic, Clara Hoppe has now been able to study an ecosystem for the first time that is certainly there throughout the winter. "For me, one of the central questions is how deeply the ecosystem sleeps during the polar night and what it needs to wake up when the light returns - if it needs to wake up at all. Initial results indicate that the algae do not sleep properly at all, but are ready to receive light all the time," says Clara Hoppe. She measures the biomass by measuring the chlorophyll concentration in the water, among other things. In winter, this does not decrease as much as expected, which indicates that the algae survive the polar night in the water. The AWI researcher and her colleagues have brought thousands of samples from the ocean from the expedition to their home laboratories - to examine and evaluate them all is years of work from which even scientists who were not on board will benefit. The samples are intended to provide detailed information about how the sensitive ecosystem in the region around the North Pole functions and what changes the creatures there are exposed to due to climate change.

"With our countless observations, we will now be able to better represent the complex interactions in the climate system between atmosphere, ice and ocean in climate models".

Finally, in the last days of the ice floe's life, just before it became water again after the end of the drift, Markus Rex looked back on the past year. His enthusiasm is noticeable: "I am overwhelmed that the concept of MOSAiC has worked out", he said. "With our countless observations, we will now be able to better represent the complex interactions in the climate system between atmosphere, ice and ocean in climate models. This will soon give us a much clearer picture of the effects of Arctic warming on the global climate," the expedition leader summarizes.

Then he and his team set out once again to find the last piece of the puzzle they still lacked in the course of the year: far to the north, they docked a second time with a floe in late summer and observed how new ice formed around it. A new cycle begins. What happens afterwards during the polar night at the North Pole will be much less hidden in the future thanks to the MOSAiC data.

Camera teams of the UFA document the expedition from the beginning. In November, the documentary film "Arctic Drift" will be broadcast on ARD.