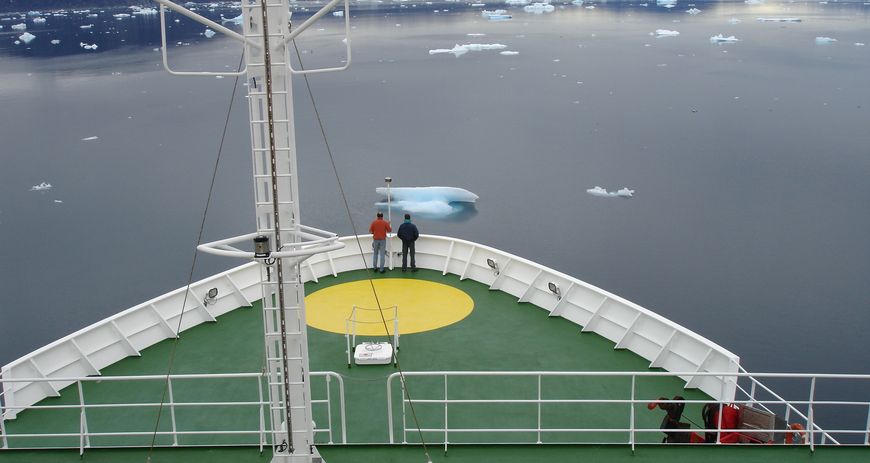 Scientists in Kiel have investigated a phenomenon hitherto underestimated by climate research: they include in their models small eddy currents in the oceans and thereby are able to create more precise climate change forecasts.

In three months, Erik Behrens achieves what takes decades in the normal course of climate change. "I let Greenland melt down", Behrens casually answers when asked about his research project. As he sits behind his desk, hidden behind three screens, nothing indicates his destructive intent. With a mouse click, Erik Behrens starts the melting of the ice masses covering Greenland – luckily only in a computer simulation.

His research project is directly on his doorstep: Behrens works at the GEOMAR Helmholtz Centre for Ocean Research Kiel, located directly on the western shore of the Kieler Förde. Right next to the laboratories, the Baltic Sea surges. Here in his office, the young researcher effects a fast motion climate change. In doing so, Erik Behrens has come across a phenomenon, which has been known to ocean researchers for a long time, but which they hitherto had underestimated: eddy currents in the oceans. These are between five and fifty kilometres in size and originate as a spin-off of strong currents. What Behrens discovered: these eddy currents considerably influence our climate.

"I research the effect of the melting Greenland ice on the ocean and thus on our climate", says Erik Behrens. Previously employed models have predicted that intensified ice melting on Greenland could stop the Gulf Stream in the Atlantic Ocean – the ocean current co-determining the mild climate in Central Europe. According to these models, says Behrens, global warming would result in even less warmth reaching us via the oceans. The researchers briefly reflects and points to his calculations: "But that's not what is going to happen anyway!" The reason for this are the underestimated eddy currents in the ocean.

"The previous model calculations did not have a high enough resolution", says Behrens. "They did not take into consideration the many tiny eddy currents, yet these play a major role, as we have found out." Behrens and his colleagues at the GEOMAR can calculate eddy currents of down to three kilometres in diameter and they can do this simultaneously in all the Earth's oceans. They thus achieve an accuracy that is unparalleled by any other research group worldwide.

Ocean currents are of particular importance for climate research models: not only do they influence the temperature on the continents, but also precipitation and air currents. Therefore, in order to arrive at a precise idea of how our climate will develop, the scientists require the greatest possible degree of realism in their ocean models. The higher the spatial resolution of these models and the smaller the calculated water movements, the more precise climate prediction will be.

The Gulf Stream is of great importance for Europe. It carries warm water from the Tropics and thus helps to create a mild climate. Yet the Gulf Stream is fed by the cold waters around Greenland: when the salty water cools down in winter, it becomes heavier, sinks down and is carried by the deep sea current to the South Atlantic and further. Mixing with other currents, the water warms up again, rises and flows back north as the Gulf Stream – driven by wind, amongst other forces.

Yet how will this be affected by increasing amounts of ice melting on Greenland due to global warming? "This results in large amounts of fresh water being released into the surrounding sea, thus lowering the salt content", explains Erik Behrens. "So far, scientists assumed that the water around Greenland would become less salty, that is, less heavy. In turn, this would reduce the amount of water sinking down in winter." The result could be interruption of the overturning circulation in the Atlantic and thus of the transport of warmth from the Tropics.

This is exactly where Erik Behrens' high-resolution simulations come in. When he starts a new simulation, all oceans are completely still. He only adds data regarding the atmosphere. "That way, the ocean can freely develop", says Behrens. The atmosphere data go back about 60 years without gaps and drive the ocean model. The degree of precision of this virtual simulation is revealed in comparison with the actual movements of the ocean. "We can control our models by comparing them with observations in the ocean", says Behrens.

The amounts of data processed in these model simulations are immense. Behrens uses external high-performance computers and even then a single model simulation at the highest degree of resolution takes three months. Erik Behrens always runs global ocean models, even though he is only interested in the Atlantic for his doctoral thesis. "It all is connected", he explains, "and this way we do not have to estimate and feed in marginal conditions." Every day, Behrens logs in on the rented super computer and controls the progress of his simulation. If he detects that a detail requires changing, he stops everything and starts afresh.

He needed ten such attempts just for the melting of Greenland's ice masses, in addition to uncounted test calculations beforehand. The melting rate Behrens fed into his model is based on up-to-date satellite data. The outcome is an extremely exact model – and a surprising result: numerous tiny eddy currents distribute the inflow of fresh water so quickly and evenly that the ocean's overturning circulation would hardly be affected within the next 30 years. "According to our model simulations, there will be no end of the world scenario like in some Hollywood films", comments Erik Behrens on his result. As he points out, the decisive difference compared to previous forecasts lies in the eddy currents, hitherto simply underestimated as regards their effect.

Already last year, Erik Behrens proved that eddy currents are important also for forecasts beyond the realm of climate. He simulated how the radioactively contaminated water, released into the Pacific Ocean in the wake of the 2011 Fukushima nuclear reactor disaster, would spread. Here, too, many tiny eddy currents limit the damage and quickly distribute the radioactive water over a large area. When, in a few years, the contaminated water reaches the American coast, the radiation burden will be similar to that of the Baltic Sea, where the Chernobyl disaster from 27 years ago continues to have an effect. So things are not all that bad regarding Fukushima? Erik Behrens considers briefly. "The eddy currents only distribute the radioactivity, which means it is still there", he says.

The same is true of ice melting on Greenland. "The overturning circulation in the Atlantic will remain, but, of course, the ice melting brings with it considerable regional changes." The decreasing salt content has an effect on the flora and fauna in the ocean and on the shoreline. For many species, this means either adaptation or elimination – either way, the marine ecosystem changes. Moreover, the sea level rises. "If everything runs normally, this will be up to six centimetres in some regions in 30 years", says Erik Behrens. This does not sound much, but over several decades it will pose a challenge for many coastal regions.

The eddy currents cannot help with this problem. But at least they maintain our mild climate.