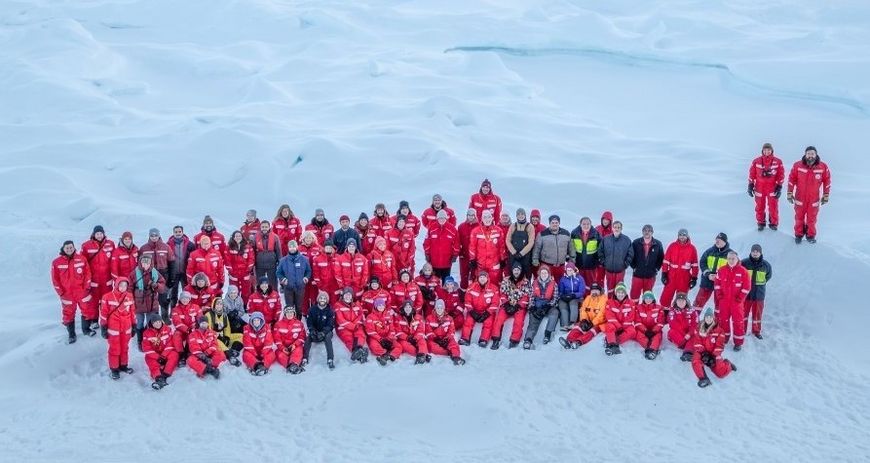 During the MOSAiC expedition, scientists from 20 nations explore the Arctic during the course of the year. Picture: AWI/Lianna Nixon

Strong in the community

For twelve months, the "Polarstern" traveled through the Arctic Ocean as part of the MOSAiC expedition, and now the scientists are returning home. About 500 people from 20 nations took part in this extraordinary journey. Helmholtz researchers report on their adventurous measurements in the Arctic.

"You only experience this once," enthuses Torsten Sachs from the Helmholtz Centre Potsdam - German Research Centre for Geosciences GFZ, "and on so many levels - scientific, personal, group dynamic and psychological. He is one of the many researchers who boarded the research icebreaker "Polarstern" and whose energetic commitment made the largest Arctic expedition of all time possible. Scientists from all over the world are involved in MOSAiC to explore the warming of the Arctic in a yearly cycle. The project of global importance is led by the Alfred Wegener Institute (AWI).

On the trail of methane with the helicopter

During his time on the "Polarstern", Torsten Sachs was mainly interested in the interactions between ocean, ice and atmosphere. The working group leader of the GFZ section "Remote Sensing and Geoinformatics" spent a total of six months in the northern polar ice together with the MOSAiC team. With the helicopter towed probe "Helipod" he set out in search of the greenhouse gas methane. To find out where the methane comes from, he took samples of the air, ice and water and examined them. For as inhospitable as nature in the Arctic is, there is life on and under the ice that needs energy and metabolism. How much methane does the Arctic release and where does it come from? Torsten Sachs pursued these questions on board the "Polarstern". However, it will be some time before he can publish the first results of his "field work". The abundance of data alone - around 700 gigabytes of data from 60 different sensors are generated per measurement flight - means that he and his colleagues will only need the data for metrological post-processing until Christmas.

In return, the scientist takes many unforgettable impressions directly from the expedition. Even the preparations were adventurous: Shooting exercises to be prepared for possible polar bear attacks, training survival in the water, rehearsing helicopter salvages. What was added during the time of the expedition were the many delays, changes in plans and coping with uncertainties - especially in the Corona Pandemic. "An expedition like this might happen once in a hundred years," says Torsten Sachs, summarizing his experiences. "As a geo researcher with a certain inclination to extreme regions, you definitely want to be part of it.

The marine ecosystem under extreme conditions

Scientists of GEOMAR - Helmholtz Centre for Ocean Research Kiel were on board of the "Polarstern" on the trail of life under the ice. During the polar night from December to February they took water samples and examined them for bacteria and phytoplankton. In this way, they wanted to find out how the marine ecosystem functions under extreme conditions and how it changes due to global warming. The focus of their research was on studies of microorganisms that live below the Arctic sea ice. Julia Gosse from GEOMAR performed the measurements on board.

For more than ten years now, Anja Engel's GEOMAR working group, together with scientists from AWI, has been observing how the production and decomposition of organic matter in the ocean, especially in polar regions, is changing in the long term. However, the experts have so far only been able to measure between early summer and autumn and mostly work in subpolar regions such as the Fram Strait between Greenland and Spitsbergen. Therefore, the investigations during the MOSAiC expedition were a real highlight for the research team

Observations of the Arctic from the air

The German Aerospace Center (DLR) took care of precise measurement technology and investigations from the air during the extraordinary Arctic trip. Because in the harsh environment of the Arctic Ocean, ships depend on precise positioning to navigate safely through the ice. To increase maritime safety, researchers at the DLR Institute of Communications and Navigation have measured and evaluated disturbances in the Galileo and GPS navigation systems near the poles - using high-rate receivers for navigation satellite data, processors and recording devices for the raw data. This extensive data will help to develop new signal processing algorithms.

Meanwhile, DLR atmospheric researchers are concentrating on the question of how Arctic clouds are formed. Since the beginning of September, they have been using their high-resolution aerial camera on board the research aircraft Polar 5 and Polar 6. It is known from previous studies that clouds contribute significantly to the rapid warming of the Arctic - but modern atmospheric models underestimate the influence of clouds and simulate it imprecisely. For this reason, the research team is measuring the air masses over a large area above the Arctic Ocean and investigating all factors relevant to cloud formation. "On board Polar 5, we are measuring microphysical cloud properties such as drop size distribution, phase, ice and liquid water content, and ice crystal shapes," explains Valerian Hahn from the DLR Institute of Atmospheric Physics. The data collected will help to improve climate models.

A total of about 500 people are involved in MOSAiC - mainly researchers, but also pilots and captains, cooks and engineers. The Arctic expedition of superlatives would not have been possible without the successful cooperation and the international research community, which has the greatest common denominator in curiosity. "We work together with over 80 institutions from 20 countries. Just the number of people taking part in the expedition goes beyond all dimensions," explained Markus Rex, head of the expedition, at the launch of MOSAiC. Now the "Polarstern" will return to Bremerhaven on October 12th. In her luggage: countless climate data collected under extreme conditions by researchers from all over the world.

Camera teams of the UFA document the expedition from the beginning. In November, the documentary film "Arctic Drift" will be broadcast on ARD.

Helmholtz centers involved in the expedition