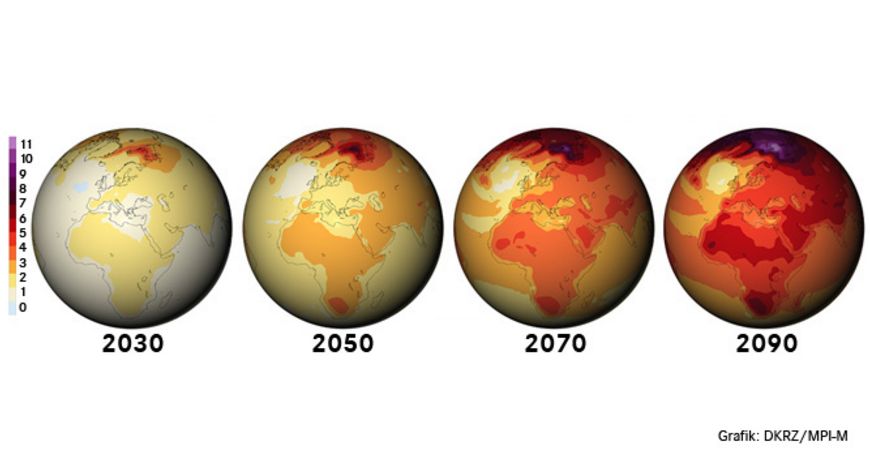 The delegates from more than 150 nations recently signed the Paris Climate Agreement in New York on 22 April. The treaty of last December was celebrated as a breakthrough. However, the journey to this ambitious objective - decelerating climate change - remains a long one indeed.

At the conclusion of the UN Climate Conference in Paris last year (2015), all actors were reading from the same page. A total of 195 nations came to an agreement concerning the objective of reducing global warming. It was agreed that the global temperature rise should be kept “well below 2 degrees Celsius relative to the industrial time”. Worldwide, politicians, media and a few environmental protection organisations as well evaluated this as a significant step. The hope for the future: irreversible processes, which would represent a threat in the event of increased global warming, could thus be prevented. If, for example, the ice sheets in Greenland or the West Antarctic were to melt, the world’s sea level would rise by many metres. Entire ecosystems on land or in the oceans would topple and extreme weather events would increase. Even with an increase in temperature of around 1.5 degrees Celsius, research scientists would expect grave degradation of the coral reefs in the world’s oceans.

“The status of the threshold values, whose exceedance would trigger such consequences, is however subject to great uncertainty,” warns Mojib Latif. “And for this reason, we should always strive to achieve the lowest possible rise in temperature.” The head of the research field Ocean Circulation and Climate Dynamics at the GEOMAR Helmholtz Centre for Ocean Research Kiel refers to the fact that, as early as 1992, the international community made a commitment at the United Nations Conference on Environment and Development in the Framework Convention on Climate Change in Rio de Janeiro to prevent “dangerous anthropogenic interference with the climate system”. “A quarter of a century later we celebrated an agreement which formalises precisely this concept, namely limitation of global warming to significantly below 2 degrees Celsius,” says Latif. Greenhouse gas emissions have literally exploded since Rio. Therefore: “After the conference is before the conference.”

Limiting the increase in global warming to 1.5 degrees Celsius, as it is stated in the Paris Agreement on Climate Change as an option, is considered by Latif to be “already virtually ruled out”. Climate change is caused primarily by the emission of long-lived greenhouse gases – with carbon dioxide being in first place (CO2). The gas emerges mostly due to combustion of the fossil fuels coal, oil and natural gas for the purpose of producing energy. By the same token, agriculture, clearing of tropical rainforests and drainage of wetlands exacerbate the problem considerably.

The national climate plans that currently exist lead to emissions that are too high to comply with the two-degree objective. In the Paris agreement, each country does indeed commit itself to climate protection objectives – even when a few countries such as China are still allowed to increase their CO2 emissions. This citation of concrete figures for emissions is, however, something new. The Agreement is indeed binding under international law, but no sanctions have been installed in the event that one of the actors does not comply. The reality in this regard is mere self-obligation by the nations. Europe and the USA have, as forerunners for industrialisation in the past 150 years or so, contributed the most to climate change. Today, China is the CO2 emitter Number One. “Industrialised countries such as Germany,” says Latif, “could certainly set an example through their energy revolution, for how an almost climate-neutral energy policy could be implemented by the middle of the 21st century.”

“The Paris Agreement on Climate Change has provided us with a framework that still has yet to be filled with national objectives and measures,” says Hans Joachim Schellnhuber, Director of the Potsdam Institute for Climate Impact Research (PIK). “Even if all of the heretofore stated proclamations were entirely implemented, and if climate policies were actually practiced thereafter, the Earth would still increase in temperature by 2.7 degrees Celsius by the end of this century.” But a voluntary approach to national climate protection objectives would not necessarily have to mean a standstill or even regression. “Quite the contrary: The resulting flexibility involving a new attitude of aiming high without the threat of sanctions for non-compliance and making courageous policies could also have a positive effect”, says Schellnhuber. “I’m betting on the obligation to make reports on a regular basis within the framework of the Paris Agreement, as well as a positive dynamic in order to close the gap between the global environmental objective and climate protection plans.”