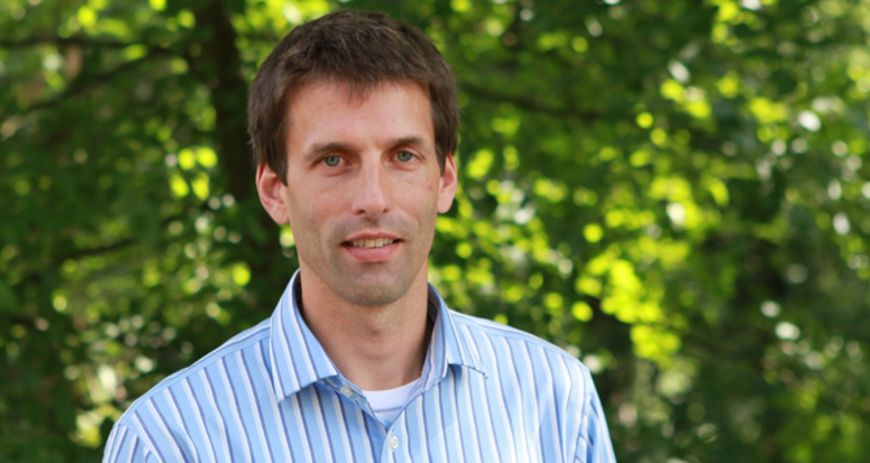 A man of the sea

Burkard Baschek from the Helmholtz-Zentrum für Material- und Küstenforschung in Geesthacht has been investigating a mysterious habitat and would like to share his enthusiasm with the public.

Everything here reminds us of the ocean: even in the entrance to Building 11 of the Helmholtz-Zentrum für Material- und Küstenforschung in Geesthacht (HZG), a model of the research ship Ludwig Prandtl is on display as well as a round, red-gold buoy, whose beacon is now blinking off and on in the staircase. Hanging on the walls are many paintings of stretches of coast with waves.

In a corner office on the first floor, Burkard Baschek is conducting research on ocean vortices. Baschek, slim and holiday-tanned in a blue- and white-striped sweater, is the Director of the area Institute Operational Systems as well as Professor for Coastal Research and Instrumentation at the University of Kiel. This is a man who followed his calling early on in life.

He was born and grew up in Heidelberg. But the sea was fascinating to him as a child, most likely based on the fact that his family took holidays together in Denmark in the summers. Burkard Baschek became interested in the surf, the tides and the energy in the masses of water. And he was able to experience them first hand from a sailboat and sea kayak. He completed his civil service obligation on the island of Sylt.

He then decided to initially study physics in his hometown of Heidelberg in order to learn the fundamentals of physics. After his undergraduate degree, he changed his major study programme to Physical Oceanography at the University of Kiel. Ever since then, he has become a citizen of the world: PhD in Canada, post-doc in Massachusetts in the USA, then Assistant Professor at the University of California in Los Angeles. ‘I benefited from each of those moves’, said Baschek.

In 2012 he assumed the directorship of the Helmholtz-Zentrum Geesthacht and moved back to Germany with his wife and two small children. They would have gone to a different country, but today Baschek is convinced: ‘I can accomplish something here that I wouldn’t be able to do anywhere else’. Projects such as the ‘Expedition Uhrwerk Ozean’ could only be imaginable with this kind of long-term financing.

The project also makes the current HZG research visible to the public in that it shows an unusual phenomenon: countless water vortices are constantly in motion on the ocean floor. Some are only a few metres across, while others are several kilometres in size. They mix the water, thus changing the habitat of microorganisms that are at the bottom of the food chain for many sea dwellers. Perhaps they are even influencing the world’s climate. We still don’t know very much about them, but the search for answers can be monitored by anybody.

In June, an airship flew over the Baltic Sea and filmed the vortices using special cameras. Drifters were lowered into the water to measure the current and temperature in the vortices. The entire programme is accompanied by a film that can be seen on the specially-produced website. In order to be able to dive deeper down into the ocean, the film is being shown in an inflatable dome cinema in ‘full dome’ projection.

Burkard Baschek is conducting research not only for himself and the world of science. He wants to share his fascination – similar to the underwater archaeologist Robert Ballard, who is known for his discovery of the Titanic that was shown live to pupils as underwater expeditions as early as the 90s. ‘It must be possible to explain science simply, visually and nevertheless properly’, he said. The mobile dome was set up, for example, at the town festival on the Day of German Unity in Frankfurt am Main. More than 3,000 visitors saw the film about water vortices there.

Baschek calls it the ‘science adventure’.  A colleague of his talked of ‘James Bond science’, and he likes this expression, too. It’s all about the searching and hunting for insights.  There are still so many unexplored things: ‘Seven years ago there were still no observational data that focused on the small ocean vortices’, said Baschek. ‘Today we are worldwide leaders in this research area’.

His area of research, the ocean, is the most uncharted habitat in the world. As a matter of fact, more is known about outer space. This is because we are able to observe the stars from the vantage point of the ground. But in order to go out to sea, we have to use very expensive equipment, and then we can still only see the surface. The upkeep of technical devices alone requires countless man-hours, either because the equipment erodes in salt water, or it becomes overgrown with algae, or it has to be recalibrated.

Barschek said of his work: ‘It’s necessary to spend a lot of time to come up with crazy ideas. We reject 90 per cent of them, but with just 10 per cent – we gain a lot’. He and his team are thus able to succeed at things that colleagues consider to be impossible – for example, the idea of collecting data using a trailing cable while it is being towed through the water at the high speed of 10 knots per hour.

Bashek has a discussion scheduled in the afternoon regarding the ‘Uhrwerk Ozean’ (Clockwork Ocean) campaign. Also sitting at the table is his wife Tanja, the project contact person for the Public Relations department. Burkard Baschek speaks quietly, and his gaze is precise. He discovers a misspelled word in a presentation, or the fact that a deployment plan is encumbering his employees too much. He also thinks about details: should posters be displayed on site fences? How far is it to the hotel? He would like a genuine underwater glider to be shown to the audience and photos of the study to be included in a presentation. Everything should be as visual and as real as possible.

Behind this group, there has been a lot work and a lot of success. Baschek and his colleagues were the first to be able to examine the vortex in such detail. The PR department for the expedition Uhrwerk Ozean was recently nominated by the ‘Bundesverband deutscher Pressesprecher’ (Federal Association of German Press Officers) as PR Department of the Year, hence Burkhard Baschek reminds everyone – seriously and quietly – that they mustn’t forget to celebrate.