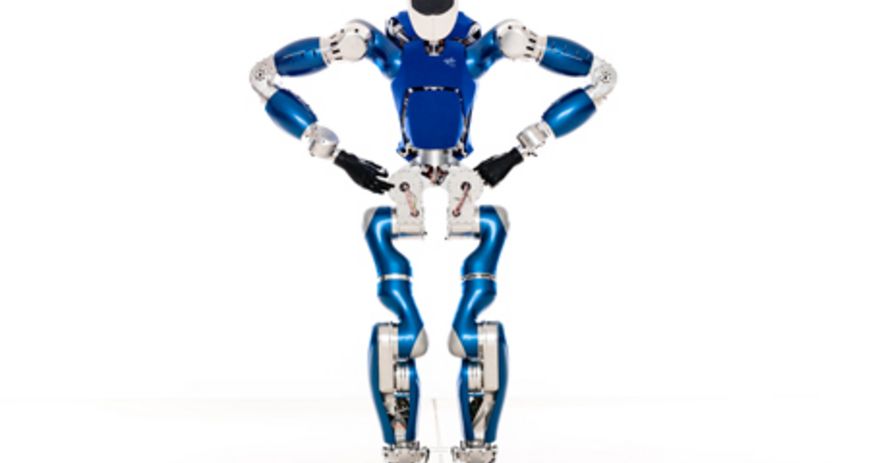 A Robot with Feeling

The human being is its model. It has strong legs, slightly thinner arms, but as yet no face: the walking robot TORO of the German Aerospace Center (DLR). Its creator is Christian Ott, a doctor of engineering, who has set himself the goal of teaching TORO how to walk - step by step. In more precise terms, the aim is the art of "flexible walking".

Mastering this is prerequisite to the robot's ability to move along in unknown territory. If TORO was to fall over at every impact instead of absorbing them, the engineer's ambitious goal would remain unattainable: one day, humanoid robots are intended to be employed in the service provision sector as well as for performing dangerous tasks, for example, in disaster zones. Present day robots usually have a stiff walk and move only in well known environments. Owing to the efforts of Christian Ott and his team, TORO, however, becomes increasingly sensitive and approximates the human way of walking more and more.

Since December 2011, Ott heads the Helmholtz Young Investigators Group "Dynamic Control of Legged Humanoid Robots" at the DLR-Institute of Robotics and Mechatronics in Oberpfaffenhofen. Yet his endeavours with TORO date back to an earlier time: Ott began his work in 2009 with the model of an arm which he evolved into a walking apparatus – without an upper body and shoulders attached to the hip.

Ott and his team focus on improving the capacity of ambulation. They first optimised the power-driven gait of TORO before they added an upper body to it. "This enables him to interact more with his environment", says Ott. Driven by a computer-controlled signal, TORO starts walking. Sensors in its feet measure the forces of each tread, sensors in the joints allow it to get a feeling for its environment. "He can balance impacts whilst standing. In future, he is to be capable of doing this also when walking", says Ott. "He is to be capable also of navigating stairs and opening doors."

The actual further development of TORO takes place on the computer: using simulations, the researchers refine algorithms and develop methods for rendering TORO's gait more robust and flexible. In the long term, the DLR researchers intend to further adapt their walking apparatuses to emulate humans even more, for instance, by imitating sinews. This is to enable future generations of robots to walk faster whilst requiring less energy.

To the press release of the DLR

To the Helmholtz Young Investigators Group of Christian Ott