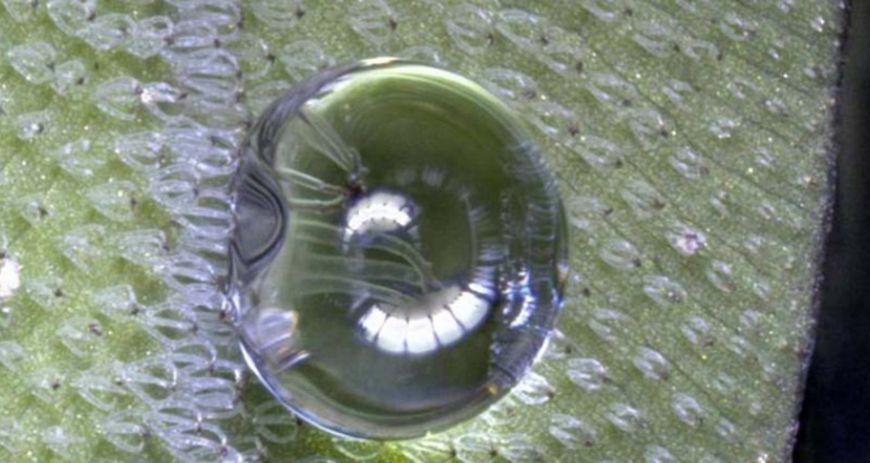 Natural cushion of air Fine hairs retain an air layer between the leaf and the water. Photo: T. Schimmel (KIT)

When certain aquatic plants are submerged, they simply take their air for breathing along with them. They thus are able to survive under water for many months. Soon, scientists intend to artificially construct surfaces resembling those of the aquatic plants. These may allow ships to glide through the water as if carried by air, resulting in fuel economies

"It is quite spectacular what nature comes up with", says Thomas Schimmel. At the Karlsruhe Institute of Technology (KIT), physics professor Schimmel is working on a new project that focuses specifically on this retained layer of air. Soon he and his team intend to artificially construct surfaces resembling those of the aquatic plants. These may allow ships to glide through the water as if carried by air, resulting in fuel economies.

The plant model used is the aquatic fern Salvinia molesta. Recently, the physicists at the KIT and the team around botanist Wilhelm Barthlott (University of Bonn) have discovered the Salvinia effect, named after this plant. They demonstrated the trick by which the nanostructure plant surface can permanently retain air under water. The Salvinia effect is based on the fine surface hairs. These are water-repellent; only their very tips are hydrophilic and maintain a firm hold on the water film above the air stored below. They thus ensure a stable mantle of air. If the Karlsruhe team is successful in replicating this, they soon will attach samples to the hulls of seagoing vessels. Fluid dynamics researchers will then put these surfaces into an artificial canal and pull them through the water to test whether the air layer remains stable. The chances are good: the Karlsruhe researchers have already created coated surfaces based on the Salvinia effect that have been submerged in their laboratory for three years. They have continued to retain their air layer without any problems.