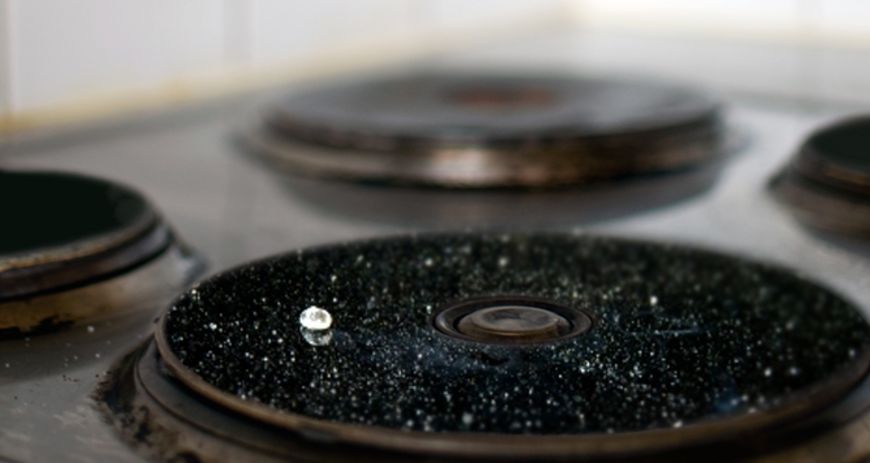 A Laboratory in a Water Droplet

They can be found in ketchup and cosmetics: nanoparticles. A discovery from the kitchen could help to make their production more environmentally friendly

The idea that could revolutionise the production of nanoparticles originated in a kitchen. Chemist Mady Elbahri had just baked pancakes and washed his hands. In doing so, a few water droplets fell onto the stove top. Nothing unusual happened: the droplets danced about on the still hot hotplate – a phenomenon that scientists call the Leidenfrost effect. This is when a layer of vapour develops on the underside of the droplets, caused by the hot surface. The droplets hover above the hotplate like a hovercraft.

When Elbahri, who leads the Helmholtz University Young Investigators Group Nanochemistry and Nanoengineering of the Helmholtz-Zentrum Geesthacht und Kiel University, detected residual matter after the droplets had evaporated, his curiosity was awakened: what is the consistency of the particles produced under these specific circumstances? Following an intuition, he conducted a test at the laboratory. He dissolved zinc acetate and silver nitrate in water, let the droplets dance and investigated the structure of the residuals. The result was more than astonishing. Under the scanning electron microscope, the particles that had developed proved to be nanoparticles of zinc oxide and silver.

Nanoparticles are extremely sought after by the industry. They have special characteristics, for example, a high degree of chemical reactivity and electrical conductivity. The tiny particles, which are more than 1,000 times smaller than the diameter of a human hair, are used, amongst other applications, in cosmetics and fuel additives, for example, in the form of metal oxides.

Elbahri calls his discovery a "triumph". The scientist has uncovered a hitherto unknown peculiarity: the fact that Leidenfrost droplets feature conditions in which nanoparticles can be produced. This is made possible by a complicated interaction within the droplets, caused by water, ions and overheated regions. The new process is a small sensation because it paves the way for a sustainable production of nanoparticles. For if one was to use Leidenfrost droplets to produce these minuscule particles, only water would be required as a solvent. This is in stark contrast to currently employed production methods: the processing requires the use of poisonous additives.

In November last year, the team around Elbahri has caused a sensation in science magazines with its innovation. The press furore was triggered by a detailed article in the journal "Nature Communications". Now, the next step is on the agenda: the production of nanoparticles with the Leidenfrost procedure is to be tested on a larger scale than has been the case so far. In addition, the research group intends to clarify very basic questions: "We still are not able to sufficiently describe all processes that come into effect with respect to the Leidenfrost phenomenon. We want to change this", says Elbahri.

In the meantime, the investigations of the Kiel-based material scientists are not the only project occupying the local nano research. Researchers at the Institute of Ion Beam Physics and Materials Research of the Helmholtz-Zentrum Dresden-Rossendorf (HZDR) have recently developed a method which could simplify the production of nanoelectronic components. They use DNA strands as a framework for the production of nanoelectronic components. What makes this so special? "The patterns evolve in a self-organised manner. No chemical and lithographic pre-structuring is necessary here as is the case in other methods where one places and aligns DNA nanowires. This makes our procedure fast and uncomplicated", explains Adrian Keller, head of the project. Another success for nano research.