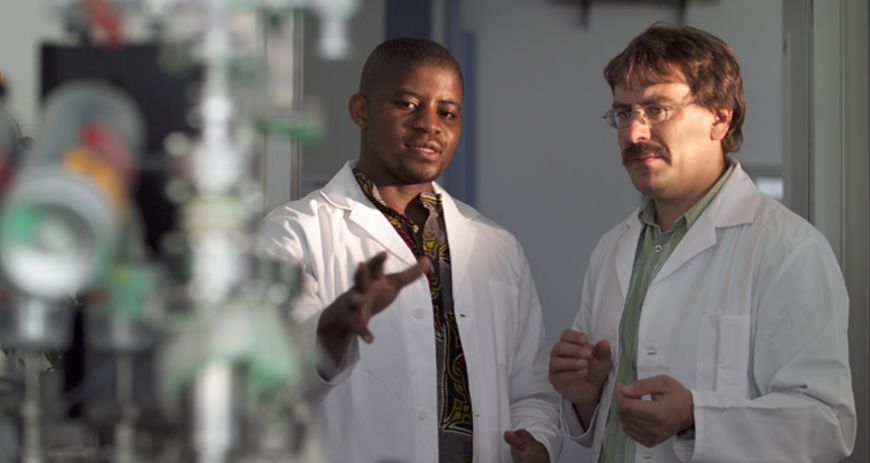 However, the talent factory of the US is now facing competition: Germany. More and more young people from around the globe are making the decision to study, work and live in Germany. Why? What is so attractive about a country whose language is not easy to learn, and that is considered bureaucratic, complicated and overregulated? At this year's meeting of the American Association for the Advancement of Science (AAAS) in Chicago, three young researchers from three different continents will speak at a press event organised by the Helmholtz Association about why they have chosen Germany as their place of work and residence. Xiaoxiang Zhu from China, Daniela Panáková from Slovakia, and Emad Aziz from Egypt met with us beforehand for an interview.

The Helmholtz Association is one of the main partners of the AAAS Annual Meeting, which provides a forum for scientists, journalists and communications sector representatives from across the world to come together and share their experiences. The comprehensive programme includes talks, workshops and discussion rounds, and provides an excellent environment for networking.

At this year's meeting, which takes place from 13 to 17 February in Chicago, representatives from the Helmholtz Association will hold a panel discussion with three scientists from China, Slovakia and Egypt in front of an audience of over 100 international journalists on the topic of why more and more young people are choosing to launch their scientific careers in Germany.

The American Association for the Advancement of Science (AAAS) is an international non-profit organisation for the worldwide promotion of science. Alongside its involvement in the fields of education and social development, the AAAS is also an interest group and professional organisation. The AAAS organises events for its members and publishes the journal Science as well as numerous scientific newsletters, books and reports. It also implements programmes worldwide to promote a better understanding of science.

Xiaoxiang Zhu was born in China in 1984. After completing her Bachelor's degree in Space Engineering in China, she enrolled at the TU München, where she completed a Master's degree in Earth Oriented Space Science and Technology, which links the technical aspects of observation systems with the applications of Earth sciences, satellite remote sensing, and navigation. In 2011, Zhu received her Doctorate of Engineering and began lecturing at the TU München. She runs several project groups. Since September 2013, she has been running a Helmholtz Young Investigators Group researching the field of Earth observation. She lectures at the TU München and is often invited to give seminars at universities in China and the US. She has received numerous awards for her research.

Daniela Panáková is from Slovakia and studied biology at the Comenius University in Bratislava. She wrote her PhD at the Max Planck Institute of Molecular Cell Biology and Genetics in Dresden, and in 2007 went to work at the Harvard Medical School in Boston. There, she worked initially in the Heart Center at Massachusetts General Hospital, before moving to the Brigham and Women's Hospital in 2009. In 2008, she was awarded funding in recognition of her achievements by the international Human Frontier Science Program. Since 2011, Panáková has led a Helmholtz Young Investigators Group at the Max Delbrück Center for Molecular Medicine (MDC) in Berlin-Buch and a research group at the Charité university hospital in Berlin.

Emad F. Aziz was born in Cairo. He graduated there with a Bachelor's degree in Chemistry in 2001 and obtained a grant from the DAAD, bringing him to Berlin, where he went on to obtain his Master's degree and PhD. Since 2004, he has been working at the Helmholtz-Zentrum Berlin, where he heads a Helmholtz Young Investigators Group. In addition to this, he holds a professorship at the Freie Universität Berlin. The methods he devised enable researchers to gain insight into extremely fast, complex processes, such as those that take place in catalysts or in biologically important molecules such as haemoglobin and myoglobin. In 2011, Aziz was awarded an ERC Starting Grant by the European Research Council for his research, and he has received a variety of other accolades and awards.