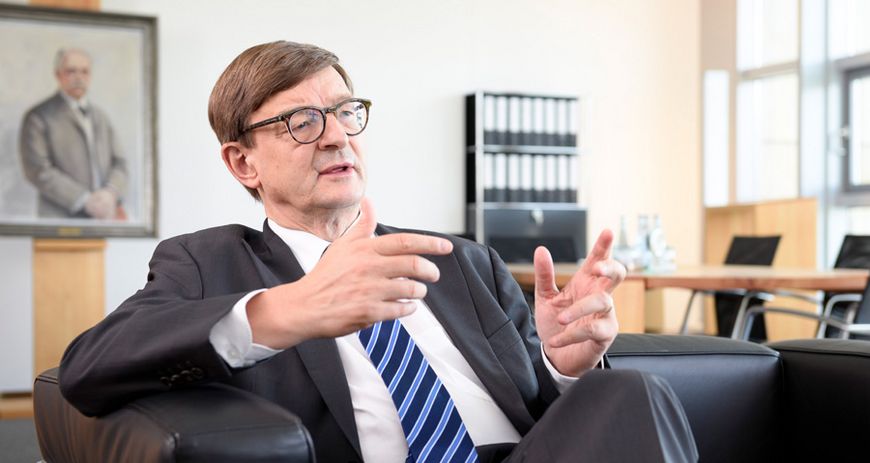 On the day of the March for Science in April scientists in many locations around the world take to the streets. Helmholtz President Otmar D. Wiestler explains why he supports the movement.

More and more scientists are taking a political stance. Is that a positive development from your point of view?

Science in general is not on a mission to get involved in the everyday political discourse. However, we, as scientists should make our voices heard if scientific freedom is at risk. It is of great value and we should actively advocate for it and defend it. In modern societies, science plays a critical role. It delivers the facts and the results our prosperity is based upon and that provide the foundation based on which it is possible to make decisions - for both, politics and society. This is also an important role of science and if it is questioned, we as scientists should intervene and clearly take a stand. Moreover, we should amplify our efforts to communicate comprehensible scientific content to the public. Knowledge transfer is a key component of the Helmholtz Association's mission.

Where is the freedom of science facing its greatest threats?

Scientific work occurs in an international setting. To be able to find answers to the ever more complex issues of our day and age, the best researchers in a discipline have to be able to collaborate - regardless of where their roots are and where they are working. Anything that hampers scientific exchange that extends beyond national borders will harm science. That's also the reason why the Alliance of Science Organizations took a clear stance against U.S. President Trump's immigration ban. We are also extremely perplexed by the statements on climate change and other science-related subject matters. However, we are even more concerned about the situation in Turkey than we are about the current state of affairs in the United States. In Turkey, researchers are losing their positions because of their work they and end up in prison. The Alliance has also taken a clear stance as far as this situation is concerned.

What else can science do?

In politically challenging times, science can continue to act as a connecting element. One example of this is Russia, where we have remained active despite all of the developments that have occurred in recent years. Especially in difficult political eras marked by sanction, we would definitely send the wrong message if we allowed scientific collaboration to be halted as well.

U.S. scientists are planning a demonstration for April 22 - a "March for Science." Several similar events are on the agenda in Germany as well. Do you think that such activities will have an impact?

They send out an important message. Such activities ensure that the public is also more keenly aware of science's concerns. However, one such event won't do enough. It is of critical importance to advocate for scientific freedom on different levels and to do this over the long term. We support the March for Science. It will please me if many scientists - including members of the Helmholtz Associations - participate in the events scheduled for April 22.

To what extent should politics be permitted to control the details of science programs?

Science has to be able to prosper on a foundation of leeway and creativity. There are numerous examples of great - not previously planned - scientific discoveries over the course of history. Every scientist is familiar with this scenario. It is the important responsibility of politicians to define adequate frameworks and sponsoring priorities for scientific activities that allow for a vast amount of flexibility and sustainably support creative research.

You worked abroad for a long time. How did that affect your career?

For me, the many years I spent in the United States and Switzerland allowed me to gain experiences that were of critical importance. The contacts established during research assignments abroad last a lifetime. At the Helmholtz Association, we foster international exchange by encouraging our young scientists to embark on foreign assignments and also by recruiting talent from other countries to conduct research in Germany. The U.S. is still the primary destination of our up-and-coming scientific researchers.

Germany will have its own election this year. Can you envision any scenario that would pose a threat to scientific freedom in this country?

I don't see any such threat here. In Germany we have enjoyed truly remarkable support in the fields of research, development and innovation for many years. Parties that render the freedom of science questionable or that want to place restraints on the international exchange between scientists or that deny scientific facts do not play a an important role in our nation. At least not at this time. Most of the parties that have delegates in the German Bundestag (Parliament) have made clear commitments to continued investments into science in their respective election platforms. We are very pleased to hear that.

Do people place a lot of trust in science?

I would say they definitely do. That applies to climate change, the energy transition, data security and widespread common diseases. Our ability to handle the major challenges we are confronted with today, hinges on research and science. I am certain that this insight will continue to manifest itself in enlightened society. Of course science will have to foster a dialog with society to ensure that this is the case. We can do even more to drive this process. Events like the Science March do play a critical role in this context as well.

More about Science March in Germany