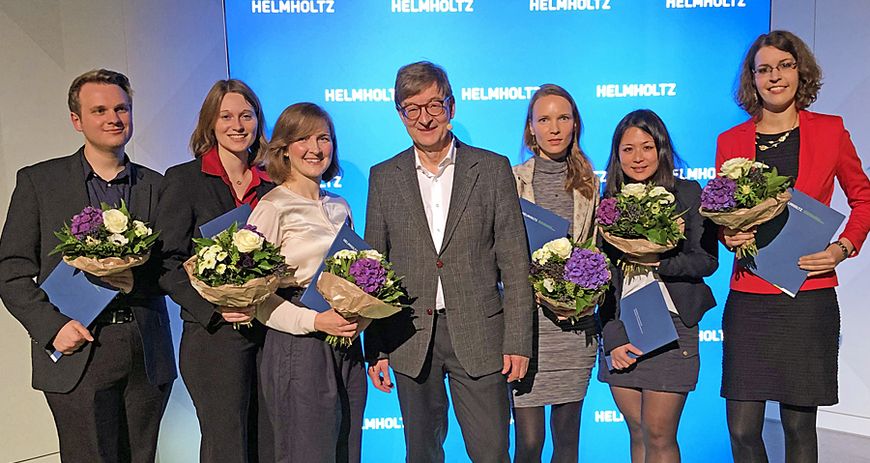 At Helmholtz, more than 8,000 doctoral students do their research. Six of them received the Doctoral Prize 2019 in Berlin. With this award, the Helmholtz Association supports talented young researchers at an early stage.

Katrina Meyer studied biophysics at the Humboldt University in Berlin. Later she received her doctorate at the Max Delbrück Center in Berlin and is now a postdoc at the University of Zurich. In order to understand genetic disorder better, she researches the complicated processes within a cell. Many disease mechanisms have hardly been researched to this day.

Miriam Menzel was born in 1990 in Neuss, Germany. She studied physics at RWTH Aachen University, Germany and Imperial College London, UK with specialization in theoretical solid-state physics, medical physics, and biophysics. In 2014, she started working as PhD student in the Institute of Neuroscience and Medicine (INM-1) at Forschungszentrum Jülich. In 2018 she received her doctorate in physics from RWTH Aachen University and is now a postdoc at the INM-1. Using supercomputers, she develops methods that enable a more correct reconstruction of complex nerve fiber constellations in the brain.

Anita Schulz was born in Jena in 1985 and grew up in a family of scientists. She studied electrical engineering at the TU Berlin with a focus on acoustics and audio communication. Later she received her doctorate at the German Aerospace Center (DLR) in the Department of Engine acoustics. Her passion for music led her to the Berlin University of the Arts, where she studied sound engineering parallel to her doctorate. With her research, she aims to reduce noise from aircraft engines more effectively in the future.

Annegret Grimm-Seyfarth studied Biology with a focus on Ecology at the University of Leipzig. Later she received her doctorate at the University of Potsdam in cooperation with the Helmholtz Centre for Environmental Research in Leipzig. She has been studying the effects of global climate change on vertebrates for ten years. In the Australian Outback, she studied the population ecology and physiology of reptiles. Today, she is working on amphibian species in the floodplain landscape of Leipzig, which she is able to explore on land for the first time through the use of wildlife detection dogs. With her research she wants to achieve an improvement for nature conservation.

Josua Vieten studied chemistry and materials science at the TU and LMU Munich, as well as at the University of Augsburg. Later he earned his doctorate in engineering from TU Dresden for his research at DLR. He is now project manager and researcher at the Institute for Solar Research of the German Aerospace Center (DLR) in Cologne. In his interdisciplinary research, he uses modern computer chemical methods to discover materials for the conversion and storage of solar energy. These materials are of particular interest for climate-friendly industrial processes.

Yi-Jen Chen was born in Taiwan in 1987. She studied physics at the National Taiwan University with a focus on light-matter interactions. To pursue that interest, she embarked on a journey to the German Electron Synchrotron in Hamburg, Germany. In 2019 she received her doctorate at the University of Hamburg. She is now a researcher at the Max Planck Institute for the Physics of Complex Systems in Dresden, Germany. Her current research interest is to unleash the power of machine-learning algorithms to efficiently model, understand, and control laser-matter interactions