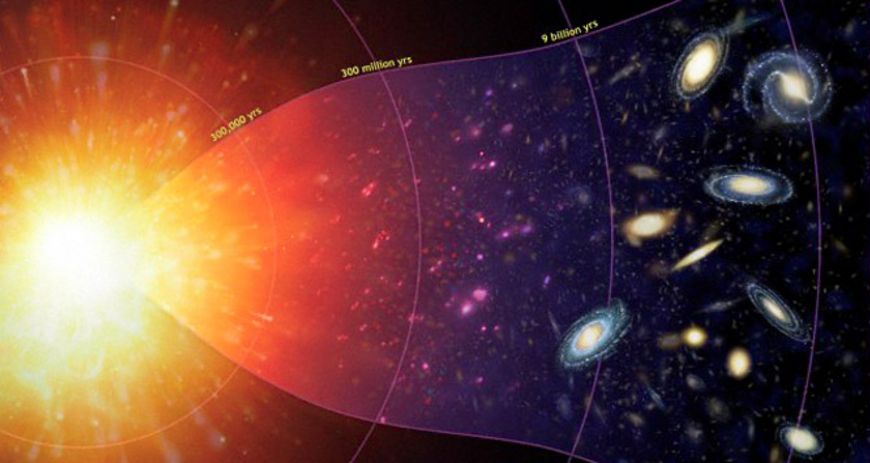 Time runs forward. But it doesn’t necessarily have to, claim the physicists. Perhaps there is a second universe , where it runs backwards.

His hair changes in colour from grey to blond, his skin becomes smoother, his body stronger. Benjamin does not grow old - he becomes younger. His biological clock runs backwards. In the film "The Curious Case of Benjamin Button" this is possible; film directors frequently experiment with time. Even the first film makers had fun with letting the images run backwards. Collapsed walls sprang back up again, broken fragments reassembled into cups and jumped back into the hand of their owners. The audience laughed because this is not possible in reality. Or is it?

In October in one of the most renowned trade journals for physics, the Physical Review Letters, a new theory concerning the "arrow of time" (Arthur Eddington, 1927) emerged; this deals with the temporal connection between the past, present and future. The authors Julian Barbour, Tim Koslowski and Flavio Mercati concerned themselves in the text with one of the great puzzles of physics: Why do human beings experience time in only one direction?

This question, for physicists, is actually less absurd than it appears to be at first glance. For the most important laws of physics - from the law of gravitation to the theory of relativity to quantum mechanics - the direction of time makes no difference. They would function equally well , if time ran in the opposite direction.

At the same time, every cause has its effect. Everything that consists of many particles devolves from an ordered to a disordered condition. Order decreases. This is described in the second law of thermodynamics, a field of classical physics that describes the various forms of energy and their redistribution. But anyone who has to clean up his flat, forgets his coffee, or owns a mirror can observe this: coffee gets cold, our bodies grow old.

The issue at hand here is an observation that can be made all over the world - and here on the planet earth, as well as on the moon. We can therefore regard it as a principal characteristic of nature: Time runs forwards. That this doesn't necessarily have to be the case has been demonstrated by physicists through a thought experiment. They reconstructed a situation on the computer that resembles the Big Bang. It was shown that particles, from that point on, expanded in two different directions due to gravity. Complex systems resembling those of galaxies arose in both directions.

Physicists concluded that, from the Big Bang, two universes could have developed that markedly resemble one another, but time runs forwards in one and backwards in the other. The direction of the arrow of time is not determined by thermodynamics; rather, it is determined by gravity. This theory would explain why, in our universe, one can move forwards and backwards in space, but not in time.

Time could thus run in both directions. That human beings observe only one direction has to do with the fact that we are aware of only one universe. We simply haven't stepped back far enough heretofore to see the overall picture, explains Julian Barbour, one of the authors of this theory. "I was surprised myself how simple the solution to the time-arrow problem could be", he says - provided at least that this approach should really turn out to be the solution, which still has to be examined further as he himself admits. We shall never observe time running backwards, even if it exists. "We are trapped in our experience. We cannot go to the other side of the Big Bang", says Barbour. But he does not consider that a problem. It is frequently the case that one cannot observe something directly, but can only form a conclusive theory. The responses that he received after his theory was published in the trade journal were "encouraging".

Criticism then comes out of Germany; H. Dieter Zeh, emeritus Professor of physics at the University of Heidelberg and a friend of Julian Barbour who has dealt with the topic of the arrow of time for more than 30 years, defines the experiment as "child's play on a far too simplistic level". He says: "The model is not very realistic. "In the Big Bang, there were more factors that came into play that were not considered in the model. For example, radiation or irreversible quantum phenomena. The authors were reportedly familiar with these factors, but they would not explain why the results from their numerical example, even within the framework of this simplified model, are supposed to be "typical". Zeh criticises that the model suggests that the Big Bang emerged in an absolutely natural manner, but on the other hand is also based in many respects on an initial assumption that is atypical. "It contradicts somewhat the general principles, but it isn't too dramatic. There won't be a Nobel Prize for that and it won't upset any fundamental laws", says Frank Maas, Professor at the Institute of Nuclear Physics at the Mainz Johannes Gutenberg-University and Director of the Helmholtz Institute Mainz.

This reversed time-arrow would also have no bearing on the laws of nature. Disorder would increase in such a universe as well. In other words, it wouldn't resemble a film that runs backwards wherein broken fragments of a cup would put themselves back together and a pile of stones would rise to become a wall. "There are more possibilities for disorder than for order", says Kai Zuber, Professor at the Institute for Nuclear and Particle Physics at TU Dresden. A cup can shatter in a thousand different ways, but can only be put back together in one way. That fragments would join together precisely in this form is not impossible, but it is improbable. "What it would mean specifically and whether life would be possible there - I wouldn't venture to make a statement about that", he says. Even if there were people for whom time would - from our point of view - run backwards, we wouldn't be able to communicate with them, because we are stuck in either the one system or the other. The life of Benjamin Button hence remains fiction.