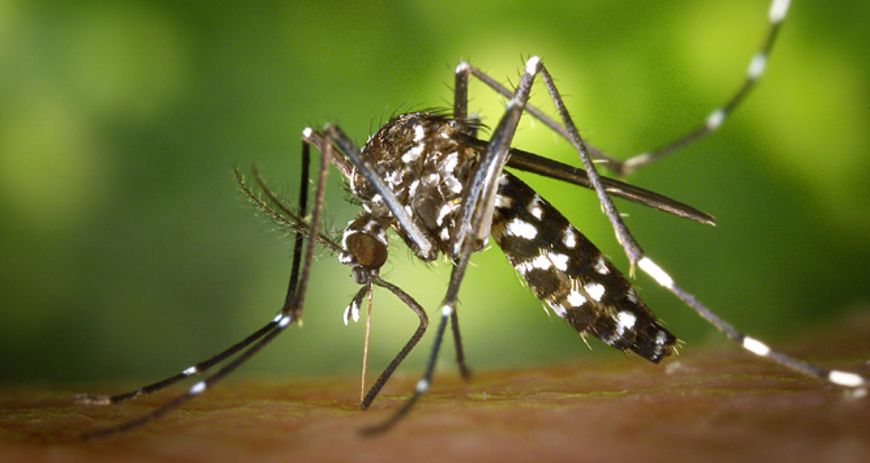 The tiger mosquito is a vector for the spread of the Zika virus. Photo: James Gathany/CDC/dpa

A virus under suspicion

Cases involving microcephaly have been steadily increasing in Brazil. A correlation with the Zika virus, first introduced in 2014 and which is transmitted by the tiger mosquito, suggests itself. But all too little is known about this virus that is on the advance worldwide.

The Zika virus, transmitted by mosquitoes, was first documented in the year 2015 in Brazil. Ever since then, the number of cases of microcephaly has been rising.  This involves an abnormality of the brain that is caused by a much too premature closure of the cranial sutures in the human embryo. The result is that the circumference of the head in children at birth is less than 32 centimetres. Women in Zika regions are hence being urgently dissuaded from pregnancy. How certain is the correlation between the Zika epidemic and microcephaly? And what exactly does the Zika epidemic portend for the 2016 Olympic Games in Rio de Janeiro? We spoke with Jonas Schmidt-Chanasit, Director of Virus Diagnostics at the Bernhard-Nocht-Institute for Tropical Medicine in Hamburg.

Zika virus infections are evidently appearing more and more in Brazil now. The virus was documented there for the first time one year ago, while in the meantime it has been correlated with approximately 3,000 cases of microcephaly. What is brewing in Brazil?

Presumably, the virus was introduced to South America in connection with the 2014 Football World-Cup. It was most likely transmitted by infected mosquitoes whose larvae, or eggs, were imported with the clothing or baggage of human beings. It could also be the case that the virus had already been circulating for a number of years without having been noticed.

Is the correlation between Zika virus infections and an accumulation of microcephaly cases in pregnant women explicit?

The correlation suggests itself – however it has not yet been proven. This is due to the inadequate possibilities for diagnostics similar to the Ebola situation: Brazil has only one reference centre that is reasonably capable of diagnosing a Zika virus infection serologically, that is, after the acute infection on the basis of the resulting antibodies. Worldwide, there were only three such specialised laboratories in the past.

Nobody was seriously interested in the Zika virus until recently. There are hundreds of viruses that are transmitted by mosquitoes which nobody has ever heard of – but any one of these could move into the spotlight at any moment. And ironically, it occurs in those countries where the diagnostic capacities are most limited. This is why it is taking so long to clearly substantiate possible correlations.

So is the correlation between Zika virus infections and microcephaly known in the areas of origin?

That cannot be clearly stipulated. This correlation is not known in Africa, but whether it had been discovered there or it gets lost in the overall higher infant mortality rate – nobody knows. However, the deformities in connection with Zika infections have also been characterised in French-Polynesia.

What would be the proper scientific approach for finding the evidence?

Direct virus detection is a simple standard and can be done in almost every country. But the Zika virus can only be detected very weakly and for a very short period of time in infected patients. Frequently it is only possible to detect the antibodies, and this specific antibody test is quite complicated. In the context of a large number of pregnant women with both normally and abnormally developed foetuses, one would have to prove the existence of the specific antibody against the Zika virus. The main problem here is a serological cross-reaction with antibodies that are directed at the dengue virus.

What does that mean?

The antibody test is not very specific. Once it takes hold, it could turn out that it was a dengue infection, or even yellow fever. The Zika virus is probably concealed behind many of the alleged dengue virus infections. That makes the whole business quite complicated. The key to being able to tackle everything else is, first of all, to put together a good diagnostic procedure. This is so that we could be able to recognise once and for all, how many individuals the virus is infecting and who those individuals are. Even an unequivocal proof for the correlation between virus infection and yet another neurological impairment – the Guillain-Barré syndrome (GBS) – is still missing.

So what kind of advice can one give to women in this situation?

As I mentioned earlier on: there are many indications that there is in fact a correlation between infection and microcephaly. However, there is still no conclusive proof. Only once we have that will we be able to explicitly tell the women: If you want to get pregnant, you must have yourself tested for Zika virus antibodies. Similar to rubella (German measles), immune protection is in place if an individual has had the infection previously.

We can get protection against rubella with a vaccination – and against Zika?

A Zika virus vaccination does not yet exist, and it’s also impossible to develop a vaccine so quickly. But until that time, the typical safety measures apply: Avoid affected regions or make use of the classic measures – wear clothes that cover as much skin as possible, use mosquito sprays or creams, stay in air-conditioned rooms as much as possible…..

How does the progression of the Zika infection differ from the dengue infection?

Not at all. Both viruses cause a small fever and skin rash. And in the majority of cases, the symptoms are not even noticeable. With dengue fever, more than 50% don’t even realise that they are infected. But Zika can also lead to severe neurological damage – Guillain-Barré syndrome – which can cause permanent paralyses. That was the case in a large Zika virus outbreak in French-Polynesia two years ago.

It has been said that the climate phenomenon El Niño promotes the spread of vector mosquitoes, thus promoting also the Zika viruses…

I would be very hesitant to jump to that conclusion. All models that seek to make predictions regarding a dengue or Zika virus outbreak are not successful. There are simply too many factors that have to be taken into consideration – and we only understand a few of them. From human immunity to mosquito immunity to the issue of whether mosquitoes that already carry one virus are not at all able to be infected with certain other viruses. The science of virus-ecology has been seriously neglected and scarcely examined. Even the immune system of mosquitoes has hardly been researched. We simply don’t understand enough to be able to make predictions.

Yes, but the existence in itself of many mosquitoes does not amount to an outbreak. Many factors are required that have to fit together.

Are special precautions being taken for the Olympic Games in Brazil this year?

Tackling the mosquito problem on site and sustainably would cost billions. For the German athletes, for example, there is a special biosafety programme sponsored by the Federal Foreign Office to show them how they can protect themselves against these infections. For this purpose, we carry out so-called mosquito-monitoring on site. In this way we can directly give the German athletes maps to show them the areas that they shouldn’t visit, because the danger of infection is too high. This is also true for dengue.

Can the virus only be transmitted by mosquitoes? An infected individual who comes to Germany does not present a danger?

Only if he is bitten again by a tiger mosquito here – which could be possible in Freiberg or Heidleberg because they are already at home there. The virus is not transmitted by domestic mosquitoes. Theoretically, it could be transmitted sexually between human beings, but that is a rare and improbable route.

Is there a reliable source indicating the dangerous areas? Is somebody producing dependable, up-to-date maps?

Up-to-date information can be found through, for example, the Centrum für Reisemedizin in the internet and at their nationwide counselling centres. In principal, anyone who wants to fly to tropical areas should, in any case, get advice from a tropical disease specialist.