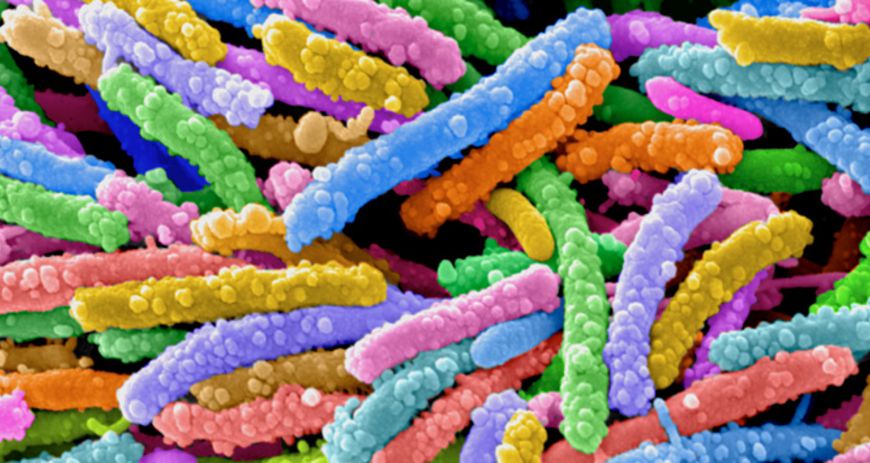 Nice to have you here!

Bacteria are our friends – this is the new motto in medicine. Spectacular discoveries offer hope for therapies against diseases that were heretofore not treatable.

Plague bacteria in New York subways, resistant super-germs in German university clinics, tuberculosis pathogens on the rise; these are only a few of the shocking reports that we are confronted with almost daily. And it is not only infections and epidemics that make up the achievements of the microorganisms – they are also involved in diabetes, heart disease, cancer, obesity, autism and depression. Bacteria, so goes the obvious conclusion, are dangerous, disgusting and superfluous – so let’s get rid of them.

A cute little idea. However, it completely misjudges the true balance of power. This is because our planet is not dominated by human beings; rather, it is dominated by very small creatures. They remain hidden to the human eye without a microscope; ten-thousand of them are about as big as a pinhead. Bacteria were here long before us, they created the oxygen-rich atmosphere, without which we could not exist and, until today, they form the basis for all life. Their numbers are overwhelming, as can be seen in the human body; our bodies consist of about ten trillion cells, but there are ten times as many bacteria that romp around inside it and on it. The intestinal bacteria alone add almost two kilos to our weight on the scale – this is more than the weight of the human brain. Only a few thousand species have been thoroughly researched. Experts estimate that up to 99 percent of all bacterial species have not yet been characterised.

Currently, research in the field of bacteria is undergoing an unprecedented boom. “Five years ago I was still able to follow the literature in my field with ease”, says Till Strowig, director of the junior scientist group Microbial Immune Regulation at the Helmholtz Centre for Infection Research. But in the meantime, the number of new publications can hardly be tracked, reports the Braunschweig researcher. The rapid increase in knowledge has been made possible by modern high-throughput sequencing procedures. Thanks to these innovations, not only has it been possible to quickly and affordably decipher genetic material from previously unknown microorganisms, they also provide an insight into the workings of large microbial communities.

The trendsetters of progress are spectacular large-scale projects such as the Humane Microbiota Project (HMP), which is investigating the colonisation of microorganisms inside human beings. It began in the year 2008, and initial findings made headlines worldwide – they appeared in 2012 in renowned scientific magazines such as Nature. According to the article, more than 10,000 different species of bacteria live on and in the human body; in one gram of intestinal content alone, up to one trillion microorganisms swarm. In the individual organs HMP research scientists found manifold microbial communities – with enormous diversity of species in the intestinal tract and on the teeth, yet strikingly little diversity in the vagina.

The overall sum of bacterial genes in the human body amounts to about eight million – human beings themselves have only 22,000 such hereditary factors. Now examinations are taking place concerning how an individual’s microbiota, i.e. the sum of all living microorganisms on and in him, change in the course of his life, and what role it plays in remaining healthy and getting sick.

Without bacteria – this has been convincingly documented again and again through research – the body could not function. They provide it with nutrients and vitamins, dispose of the rest and protect their host against all kinds of diseases. These midgets perform their beneficial services even in organs such as the lung, which was previously thought to be sterile. The devotion of these microorganisms is also surprising; the design of the intestinal colonisation remains surprisingly stable year after year, as a study appearing in the trade journal Science has shown.

Man and microbe appear to be so intimately interwoven that some even speak of a super-organism. “Who am I and, if so, how many?” – This question was flippantly posed in a philosophical bestseller a few years ago. “More than you think”, was the answer given by bacterial research scientists, as they continued, cheerfully, to count.

In connection with these new insights into the world of microorganisms, our appraisal of them is changing. In the past the negative side was mostly emphasised and they were perceived as “hostile germs”. Today the positive and the beneficial are moving into the spotlight. Bacteria are our friends, so goes the new motto. And whatever is considered a non-friendship today, could become a friendship tomorrow. Examples for this are the bacteria of the genus clostridium, which appear in soil and in the intestinal tract of higher life forms. They can be harmful to a human being, but can also be ingeniously deployed to his benefit – in cancer therapy, for example. Thus US medical professionals were successful last year in their efforts to initiate shrinkage in tumours by injecting genetically-neutralised clostridium. This species of bacteria can be found practically everywhere and can trigger the infectious disease gas gangrene. It requires precisely the same oxygen-deficient environment for its growth that prevails inside a cancerous lump. After this treatment option proved to be reliable in animal experiments, researchers used it to treat a woman with an advanced tumour in her muscles. Although she developed a fever and a severe infection, the cancer regressed. The bacteria presumably kill the tumour cells and generate furthermore a defensive reaction from the immune system, the medical professionals speculate. If their procedure proves its worth in larger studies, it could complement classic procedures such as chemotherapy and radiation therapy.

At the Max Delbrück Center for Molecular Medicine (MDC) in Berlin, Germany, another bacteria therapy is being tested. This involves a gene from the bacteria Clostridium perfringen – it can generate food poisoning – that is injected into tumours of the pancreas. This gene contains the structural design for a bacterial toxin that is supposed to be produced in the cancer cell, in order to subsequently perforate its cell wall and initiate its death. The results from initial animal experiments were supposedly quite promising, reports the Director of Studies Wolfgang Walther. Within a short amount of time the tumours shrank, and the cancerous tissue disintegrated. Someday, hopes Walther, his gene-therapy could help, during or after an operation, to eliminate last remnants of a tumour. And this would involve not only pancreatic cancer, but colon cancer as well.

However, medicine still has very little at their disposal to combat the species Clostridium difficile. With human beings, the robust germs, which are included in the normal milieu of intestinal flora, can reproduce on a massive scale after antibiotic therapy and trigger chronic diarrhoea. A novel biological therapy has been proposed by scientists at the European Molecular Biology Laboratory Hamburg; genetically modified bacteriophages, i.e. viruses that attack only bacteria, would thereby penetrate the problem germs, perforate them from the inside and, finally, cause them to split open. This interesting idea from basic research is, however, still far removed from application in practice.

Doctors have achieved remarkable success recently with these diarrhoea patients through “faecal microbiota transplantation” (FMT), or stool transplantations. Affected individuals, with whom all other therapies have failed, receive here small quantities of faeces, including the intestinal bacteria, from healthy donors. The transplanted organisms almost always colonise and stow away the Clostridium difficile microbes into a healthy place – the method can cure more than 90 percent of diarrhoea patients, as shown in a study involving previously unsuccessful medication-based treatment. There are already stool-banks in place to facilitate access to samples of infectiologically pre-examined donors. But this therapy is still reserved to individual research cases. After all, the procedure is still relatively new, therapy standards are not yet in place, and long-term effects are still unclear up to the present. In any case, an example in the US urges vigilance; a previously normal-weight patient there who had been given the stool from her healthy but corpulent daughter, put on weight severely after the transplantation and, despite decisive attempts, could not lose the weight. The exact circumstances are indeed still not known, but ever since then, treating physicians in respective clinics are only taking stool transplants from individuals without obesity, the authors of the case study reported recently.

“We now stand at the beginning of a completely new development, and many things must first of all be substantiated”, says Michael Schloter, Director of the Department Environmental Genomics at the German Research Center for Environmental Health,Munich. When the trained plant and soil microbiologist began his career twenty years ago, he was only occasionally involved with medical issues. This has changed fundamentally, reports Schloter, since today we consider ecological and health issues together. This is a logical development, since man is only one of many ecosystems for microorganisms, over the boundaries of which they constantly communicate with one another. “The microbiota of humans, animals or plants are constantly being exchanged – this occurs more or less with every breath of air we take and every handshake”, says the scientist. Certain patterns of interaction must be observed here, which are however only rudimentarily understood thus far.

The thing that unifies Michael Schloter in Munich, Till Strowig in Braunschweig and many of their colleagues worldwide, is the attempt to describe the so-called core-microbiota. This term is understood as the microbial minimum configuration that an ecosystem needs to function tolerably. “We have come a long way in the world of plants”, says Schloter, “however, for human beings we have just begun.” The goal is to find out how gender, age, ancestry and way of life influence the core-microbiota. With this knowledge individual deficiencies can perhaps be ascertained and balanced in the future. For medicine, this opens the same new perspectives as for the food industry – a few groups are already conducting intensive research in this area.

Large visions provide strength for the detail work of everyday life in the laboratory. This will pertain to two issues in the near future. What organisms are involved here? And what can they do? The right answer depends on many different things, says US infectiologist Katherine Lemon from the Forsyth Institute in Washington: “We know how to disrupt a symbiotic community; but how we return it to a healthy condition is something we still have to learn.”

This text is an article from our magazine Helmholtz Perspektiven, issue March/April 2015