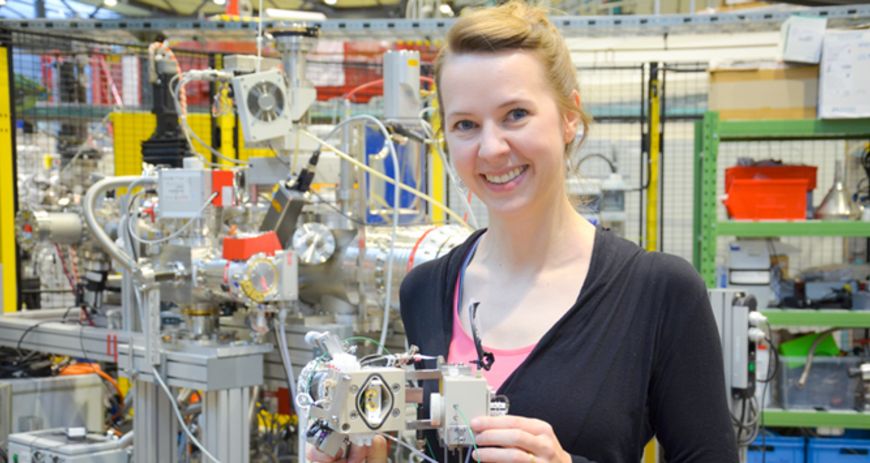 The quest for the perfect energy storage system

Our sun delivers huge amounts of energy to us every day. But we are only making use of a small percentage of it. If Kathrin Aziz-Lange had her way, this situation would soon be changed. The physicist from the Helmholtz-Zentrum Berlin is working on a system for storing the energy of the sun and making it available whenever we need it.

When Kathrin Aziz-Lange talks about her work, she is not talking about cooking; more likely about the perfect recipe that she hopes to find over the next few years. The 31 year old physicist from the Helmholtz-Zentrum Berlin is conducting research on materials systems with which we can use the energy of the sun to split water. This process produces hydrogen, which can be used for automobiles, for example, and is an important foundation for the chemical industry. "Solar fuels are climate friendly and store the energy of the sun for those periods of time in which wind and sun are not capable of producing sufficient energy," the research scientist outlines the vision.

Over the next five years, Kathrin Aziz-Lange intends to come a good deal closer to this goal. Since January 2016, she has been leading a Helmholtz junior-research study-group. The researchers want to make the production of solar fuels more efficient. "It's quite an attractive programme", she says, "since one can get a lot of work completed in five years." When Kathrin Aziz-Lange talks about her work, she speaks quickly - like a water fall - and laughs quite a bit. Her blue eyes sparkle.

It is difficult to imagine this young scientist in any other profession. But after her studies in physics at the Technische Universität Berlin (TU Berlin), she initially turned her back on research. The supervisor for her dissertation advised her not to go straight into a PhD thesis. "Kathrin, I can't imagine that you would be able to concentrate on just one topic for three years," she opined, and organised for her an internship in the PR Department at the Berlin electron storage ring BESSY II. There she wrote articles about new research results, while posing questions for the scientists - to which she received answers that didn't satisfy her. "I began by reading up on the literature, and at some point I noticed: If I'm so deeply involved in this, I might as well conduct my own research."

After a few weeks, a research scientist approached Aziz-Lange regarding an open doctoral student post and enticed her away from the PR Department. She conducted research for her PhD thesis on hydrogen bonds and developed with her colleagues a novel setup for the experiments. Then she moved on to the Max Born Institute as a post-doc. During this time Kathrin Aziz-Lange received her acceptance to the Helmholtz Post Doc Programme. "That was a huge opportunity for me." The physicist went to Switzerland for almost a year to the "École Polytechnique Fédérale de Lausanne". When she then returned to Berlin, she put together a small group at the HZB using the money from the Helmholtz fund.

Actually, Kathrin-Aziz Lange had aspired to become a documentary film-maker. Today she is a research scientist, but the two professions are essentially quite similar. Both involve observing the world and understanding. The soft X-ray light of BESSY II has now become her camera, allowing her to take a deep look into materials and to observe the processes that take place there. The issues she wants to understand more comprehensively are the imperfections in materials that are used for solar energy conversion. Such materials systems consist of a semiconductor and a catalyst. The semiconductor collects light particles (photons) from the sun. With this energy, free charge carriers are produced and electron-hole pairs emerge, which facilitate migration of the charges to the catalyst. In these processes, imperfections in the atomic structure of the materials systems play an important role. They allow on the one hand the electrons to be able to move better, and can increase the catalytic efficiency. On the other hand, however, produced charges can also be lost due to these same imperfections. "Too many defects are bad, but so are too few. Furthermore, there are different functions of defects in the layers of material and along their interfaces," Aziz-Lange explains. "Through my research, I hope to find a characteristic fingerprint for each kind of defect, enabling me to understand how the various defects can be efficiently combined."

In short: Kathrin Aziz-Lange is searching for the perfect recipe. But, unlike cooking where the chef can experiment with his recipe and add a certain ingredient or a pinch of something until he eventually gets the best results - it doesn't work like that with research. "We approach everything systematically." For each kind of defect, Kathrin Aziz-Lange has to first of all produce a characteristic test sample. "You need a lot of know-how in materials synthesis for that." In the next step she is going to attempt to ascertain the features of each defect. "After that it'll get really exciting: We'll take a look at what consequences the defects bring about under real conditions. For this purpose we want to observe, using three complementary x-ray methods, what happens inside the materials in operation - that is, with the voltage set up and in the water, she explains. So that it works, "I just have to quickly develop one of the three methods," she says and laughs. "But luckily we've already had experience with that."

Thanks to the Helmholtz funding, the head of the junior-research group is also able to bring in additional staff. "The support my team offers is great. But I still had to learn how to allocate a task and just let someone else do it." She also took advantage of the Helmholtz Academy offerings in this regard as well. "The exchange of experiences with other junior research scientists and the tips for how to manage and organise were a valuable lesson for me," says the research scientist.

Organising well - this is something that Kathrin Aziz-Lange has to be able to do. This is because the 31-year-old is not only a junior-research study-group head - since the beginning of 2015, she's also mother of a daughter. "Luckily, the little one is easy to care for and likes going to the daycare centre," she explains. After only one month of maternity leave, the physicist went back to work: in telework. And now since January 2016, Kathrin Aziz-Lange is back at work on site at the HZB. Her husband is also a research scientist and travels a lot for his work. How do they juggle their home and professional responsibilities? "Particularly in research, there is a lot of flexibility. An employee is typically able to decide for himself/herself when and where the work is done. For instance, I like to work in the evenings when my daughter is asleep." But when both parents have to be on the road at the same time, relatives, who fortunately live in Berlin, take over. She is currently running at full capacity with family and science. The physicist has found her R&R in sports. And she would like to return to a routine of spending more time on sports - she'll register with a rowing club. Kathrin Aziz-Lange has already, at the age of 31, made excellent progress in her scientific career ladder. But what is her personal recipe for success? Kathrin Aziz-Lange doesn't have to think much about that answer: "You have to have fun doing research and be prepared to take a few risks. And you need to surround yourself with people who lend support and, time and again, give you courage."