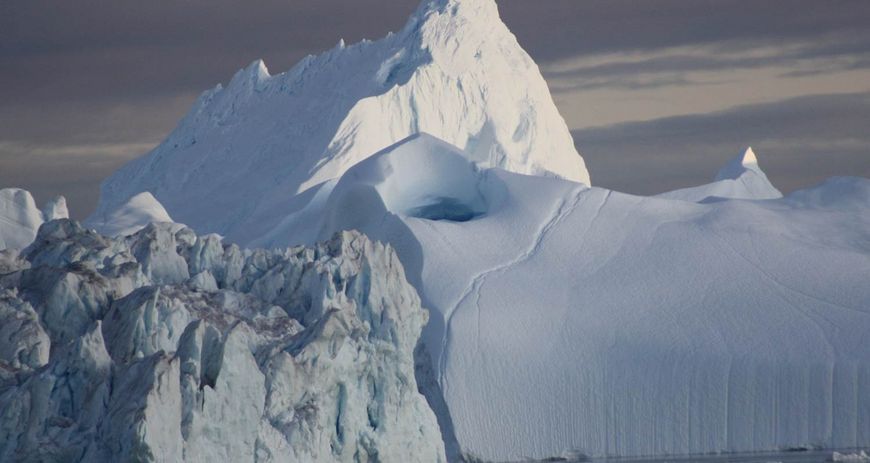 Floating icebergs produced by Greenland's largest glacier, Jakobshavn Glacier. The smooth side reveals the part of the iceberg that has already been affected by submarine melting, causing the iceberg to loose balance and tilt over. Photo: I. Sasgen, GFZ

Each year, Greenland's ice sheet diminishes by more than 200 billion metric tons. Responsible for the melting of the ice sheet are not only increasing air and water temperatures. A hitherto neglected factor in this occurrence is Greenland's upper stratum, its uppermost layer of earth, which is very thin in some areas. In these thin areas, the heat flow from inside the Earth melts the ice. This influences in particular the effluent of large amounts of ice from within the ice sheet.

In the context of the international initiative IceGeoHeat, scientists from the Helmholtz Centre Potsdam - GFZ German Research Centre for Geosciences have investigated the complex interplay between geothermal heating and the ice shield on Greenland. They were able to show that the thickness of the uppermost layer of earth on Greenland significantly varies and that, in previous models, the neglecting of the high degree of heat flow from the Earth's mantle constitutes too much of a simplification. The GFZ scientists Alexey Petrunin and Irina Rogozhina combined an ice/climate model with a thermo-mechanic model for Greenland's upper stratum, the so-called lithosphere. "We were very surprised to see how heterogeneous the structure of the lithosphere is in Greenland. Even in locations in close proximity to each other the temperature of the ground can be very different", explains Irina Rogozhina of the GFZ.

About 60% of ice loss on Greenland is caused by the effluent flow of ice. Ice that formed within the ice sheet travels by way of gigantic outlet glaciers to ultimately end up as icebergs in the ocean. These icebergs get carried away to warmer waters where they finally melt. "This process in particular can be much better understood by including the heat flow from within the lithosphere", says Rogozhina. The scientists assume that the melting of the lower levels of ice facilitates the setting into motion of larger ice masses, causing them to eventually end up as icebergs in the ocean.

Climate researchers intensively investigate the consequences and causes of the melting of the ice sheet on Greenland. The scientists assume that the loss of ice on Greenland contributes about 0.7 millimetre to the annual sea level rise of three millimetres. The interaction between temperature rise and continental ice sheets in particular is complex and subject of intensive research.