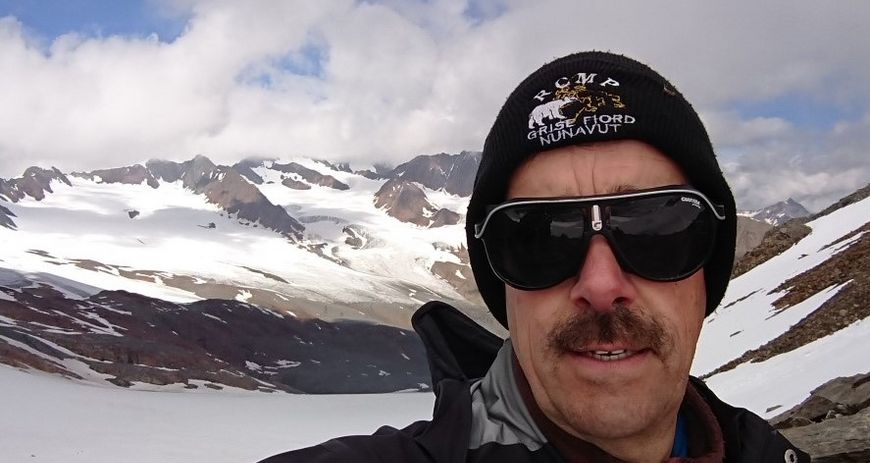 The geophysicist Christian Haas is a passionate ice researcher. Sea ice is his passion, but he is also fascinated by the mountains. Image: private

Over the mountains to the sea ice

He was the expedition leader of the midwinter king stage of the MOSAiC expedition and was able to gain some of the darkness even for three months: Geophysicist Christian Haas loves to study the sea ice in the farthest corners of the world - but he loves the mountains just as much. As a mountaineer he has conquered almost all the major peaks of the Alps.

Snow and ice are the great passion of Christian Haas. He is particularly fond of sea ice, but for this he first had to go high up. "I started as a mountaineer," says the ice researcher who led the MOSAiC expedition on board the "Polarstern" over the dark months. "I have always loved snow and ice and therefore studied geophysics. My big dream has always been to come to Antarctica, and I have given everything for that".

But first Christian Haas went to the Arctic almost 30 years ago - with the "Polarstern"! While still a student, he hired a job at the Alfred Wegener Institute (AWI). He was on board when the German research vessel reached the North Pole in 1991 as the first conventional, non-nuclear powered ship. The following year his dream came true and he entered Antarctica. Since then, he has been able to put his feet on sea ice every year, always under the guise of his main research interest: the role of Arctic and Antarctic sea ice for the climate and ecosystem and its use by humans.

In his studies of geophysics, Christian Haas focused on the investigation of near-surface layers. "I have found that the experience I have gained here can be transferred well to investigations of sea ice," he says. "My specialty is large-area systematic ice thickness measurements, and we do this using a geophysical method." The so-called electromagnetic induction method has long been used for raw material exploration on land. But it was only under the leadership of Haas that it became established as a common procedure in sea ice research. The geophysicist was also a pioneer in identifying the effects of summer snow processes on the mass balance, microwave properties and biological primary productivity of Antarctic sea ice. More than 30 field campaigns in the Arctic and twelve research projects in the Antarctic have been under his leadership to date.

Christian Haas worked for the AWI from 1996 to 2007, before he went to Canada for nine years to the University of Alberta and York University in Toronto. "It seemed obvious to me to go for sea ice research to a country that has sea ice itself," he says, explaining the decision to take such a big step with his wife and three children. "However, I had to realize that Canadian research is very inward-looking and has a strong Canadian perspective. This is also very interesting, but global problems do not play a major role and are very rarely addressed.

Already from Canada he started to participate in the planning of the MOSAiC expedition. However, he soon realized that participation under the Canadian flag was not realistic, because the question under which his research would be focused would have been too similar to that at the AWI itself. "So it was a happy coincidence that my family moved back to Germany. Back at the AWI, he took over as head of the Sea Ice Section in 2016 and now coordinates a team of 30 people - a task that includes good communication and knowledge of human nature. This suits him and has predestined him to lead the dark stage.

From mid-December 2019, Christian Haas had the scientific lead on the "Polarstern" for almost three months and took over overall responsibility for the entire expedition. A time in which the sun never rose. In which it was important to stick together, to endure, to weld the international team together. Celebrating Christmas, New Year's Eve, far away from the families and with sometimes felt -60 degrees Celsius. "Midwinter was coming for all of us, nobody knew how he or she would react. Three months in the polar night - that does something to you," he remarks. "But we all got along well, which was due to the strict work, the good supply and the leisure facilities on board, but also the good fellowship with international colleagues". When twilight finally began, as the sun slowly came higher and higher below the horizon, the team was relieved and fascinated. "One really had the feeling that the earth is a sphere, because the pale light goes all around. The nautical twilight was one of the most impressive moments of the trip for me.

From his many years of experience, Christian Haas knows exactly that sea ice is an important indicator of climate change. "When I took my first steps on sea ice, it was still two to three meters thick; today, in summer, it is barely 90 centimeters thick," says Haas. "The Arctic is the epicenter of global climate change." Christian Haas continues to observe how the climate changes on the mountains. He teaches a glacier field course in the Ötztal valley in Tyrol and has never given up mountaineering in his private life. In the meantime, he has climbed almost all the major mountains of the Alps. Only the summit of Monte Rosa, the highest mountain in Switzerland, has so far been denied to him despite two attempts due to the danger of avalanches. "But I will keep trying," he affirms.

On 12.10.2020 from 14:00 to 16:00 o'clock the Helmholtz-General Assembly takes place. This year it will be virtual, at three locations and open to everyone. A highlight will be the return of the "Polarstern" from the Arctic. Christian Haas is also our guest. He will talk with mountaineer Reinhold Messner about climate change and borderline experiences. Further information and the complete program can be found behind the following link: