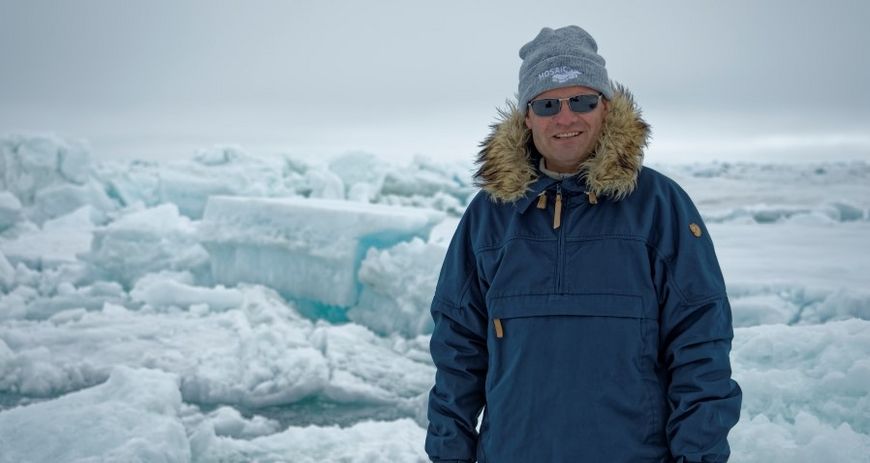 He experienced the polar night, had to reschedule an entire expedition and was frozen to the end of the world in the middle of the Corona pandemic. Why Markus Rex has little fear and why he is now calling for decisions on climate protection.

The Corona pandemic has also brought him something good: Never before has Markus Rex spent so much time with his family. Last fall, he set off on the international MOSAiC expedition to the Arctic with the research vessel "Polarstern". After three and a half months he returned home to Potsdam for a planned stay - and got stuck. The corona pandemic upset everything, transport routes collapsed. No ship or plane could bring the expedition leader back to the "Polarstern", which was frozen in the Arctic sea ice four thousand kilometers away. Despite all the hectic replanning and coordination, there was more time than usual for the family. His two sons are 10 and 13 years old. As long as they are in the world, the passionate polar researcher is busy preparing the MOSAiC expedition. "Even for the organization in the run-up to the expedition, I was constantly on the road," says Rex. "I was really pleased to see during my unforeseen stay how well we can still spend fulfilling time together as a family," he says with a laugh.

With the MOSAiC expedition, a decade-old dream came true for the native Braunschweig native. Already during his studies he was drawn to the ice. He specialized in geophysics and meteorology and travelled to the North Pole for the first time for his diploma thesis. There he investigated the Arctic ozone hole, which had been little explored until then. In Berlin and Bremen he then did his doctorate in atmospheric physics. His thesis was awarded as the best of all subjects in his year. He used the prize money to take a vacation with his girlfriend, who is now his wife.

And it wasn't just the fascination for snow and ice that drove him on. "I wanted to learn something that could also have a positive social impact," he explains his motivation. After working in the USA and New Zealand, he has been heading atmospheric research at the Alfred Wegener Institute Helmholtz Centre for Polar and Marine Research since 2016. And his calculation has paid off: Today, Markus Rex's award-winning research makes a decisive contribution to the development of precise models of climate change. These models provide a basis for designing strategies to help us contain climate change. The data collected during the MOSAiC expedition will make an important contribution to this. "We should take advantage of the small chance we have. Because our generation is perhaps the last to experience an Arctic that is covered by ice all year round". In order to make as many people as possible aware of the topic, the polar researcher himself lends his voice to the subject, in the truest sense of the word. A podcast by Südwestfunk radio, in which Rex reported from the "Polarstern", was nominated for the German Radio Award. In it, Rex impressively describes the dramatic melting of the Arctic ice that he has been experiencing before his own eyes over the past few years. For all his concern, the attention that the topic is now receiving from the general public gives him hope: "This attention is a prerequisite for the important political and social decisions that we urgently need. The times for this have never been better than today," he believes.

"In our work we move in an environment that does not forgive mistakes."

Back to the ship: In June, two months later than planned, Rex could finally return to the "Polarstern" and her crew. During this period of uncertainty, had he ever considered breaking off and staying with his family? "No", says Rex. "As uncertain as the situation was worldwide, we as a family did not feel existentially threatened." For those trapped in the ice, the uncertainty was much more depressing, he says. "Because in the Arctic Ocean they hardly received any information about what was happening in the rest of the world. It was important to him to free his employees a little from this uncertainty. Their personal well-being was as important to him as scientific progress. "On an expedition like MOSAiC, one thing mixes with another anyway," he knows from the experience of dozens of polar expeditions he has already accompanied. "In the narrowness of the ship, with the high professional pressure to succeed and under the relentless conditions of the Arctic nature, everyone depends on everyone else. This coexistence only works if each individual is doing well."

"Fear is not a good concept"

And not only the pandemic threatened the success of this gigantic undertaking. Polar bears, storms, cracks in the ice are among the everyday imponderables of a research project in the Arctic Ocean. "In our work we move in an environment that does not forgive mistakes," Markus Rex puts it. How is the 53-year-old doing with his responsibility for over one hundred employees? "Of course, the safety of each individual is always our top priority," he says. "At the same time, I know that if we never dare anything, we will achieve little on an expedition like this.

In the balancing act between uncharted scientific territory and personal safety, his temperament is a great advantage. Rex is a realist. He thinks strategically and assesses dangers objectively without letting himself be unsettled. "Fear is not a good concept for managing risks," he says, "keeping calm in stressful situations and keeping an overview. In this way he has successfully led the MOSAiC expedition through the most unusual circumstances. "Scientifically, with MOSAiC we have pushed the limits of what is possible", he emphasizes in numerous interviews after the return of the "Polarstern". And in a quiet minute he also reveals: "When I realized while entering Bremerhaven that we really all came back ashore safe and sound, a great burden fell on me.

At the end of the expedition through the ice, Rex received the SEADEVCON Maritime Award, which recognizes his commitment to sustainable and respectful treatment of the world's oceans. Now the evaluation of the collected data is pending. It will take several years before they are sighted, interpreted and published. But Rex is not resting. The sporty ice fanatic does not stop at his desk. When the winter gets cold enough in Potsdam - which happens less and less often - he enjoys long skating rides on the Havel. Or he explores nature together with his wife and sons. "On hikes, they always laugh at me because at unknown crossroads I reliably choose the way up," says Rex. "And if there is no way up, I look for my own. The adventurer. Often he is already looking for the next challenge during an ongoing project. This year, however, he has one goal: to spend Christmas with his family for the first time in two years.

Camera teams of the UFA documented the expedition from the beginning. On November 16th, the documentary "Expedition Arctic" will be broadcasted on ARD.