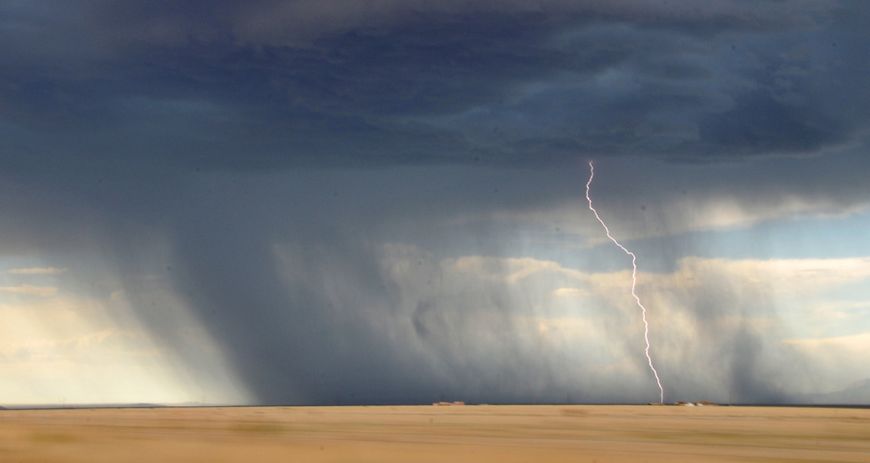 Rising temperatures mean there is more energy and water in the atmosphere. This is being released more frequently in the form of violent weather events with high levels of precipitation. Picture: Lucy Chian / Unsplash

"Act Now to Save the World"

Storms, heavy rainfall, droughts – we are all at risk from the disastrous consequences of global warming. The IPCC Special Report on Global Warming of 1.5°C spells it out clearly: We need to act right away.

Rising temperatures mean there is more energy and water in the atmosphere. This is being released more frequently in the form of violent weather events with high levels of precipitation.

At the United Nations Climate Change Conference in Paris almost three years ago, 196 countries agreed to a target of limiting global warming to a maximum of 2°C. But stakeholders did not want to lose sight of the 1.5°C target originally envisaged, with smaller island states in particular pushing for compliance. The United Nations’ Intergovernmental Panel on Climate Change (IPCC) has now completed its investigation into whether it is actually still possible to keep to the 1.5°C target, and the consequences even this rise in the average temperature would have for humanity and the environment. To this end, a core team of around 90 authors and 250 additional researchers analyzed approximately 6,000 scientific publications.

The comments arising from the multistage review process all had to be responded to and documented. This was a very time-consuming task that was carried out voluntarily by all the authors. Daniela Jacob: "Since I had already been the lead author of a world climate report in 2014, I knew how much work was involved and was aware of what I was signing up for. And of course, interdisciplinary collaboration with authors from all over the world is extremely valuable. What’s more, we are all inspired by the prospect of being able to make a difference with this report."

Astrid Kiendler-Scharr, Director of the Jülich Institute of Energy and Climate Research, who likewise worked as a consultant on the report, believes politicians are now duty-bound to act: "The scientific community has presented the facts and outlined the consequences. It’s now up to politicians to decide how appropriate solutions can be put into effect – whether by promoting renewable energies and energy storage or by taking active steps to reduce carbon dioxide in the atmosphere."

The report’s findings are wide-ranging but conclusive. An increase in extreme weather conditions, such as high temperatures, drought, and heavy rains, is already being observed around the world. Global warming of 1.5°C would further amplify the risk of these impacts of climate change. However, the report states that it is still theoretically possible to limit the temperature rise to 1.5°C.

“It’s been an historic week. The report shows that a global warming limit of 1.5°C is feasible and could significantly reduce the risks to humanity and nature,” says Daniela Jacob, one of the lead authors of the special report and Director of the Climate Service Center Germany (GERICS), a Helmholtz-Zentrum Geesthacht institution. Antje Boetius, Director of the Alfred Wegener Institute, Helmholtz Centre for Polar and Marine Research, in Bremerhaven, Germany, adds: "We’ve known for a long time that we needed to act, but now we have clear targets and hard data. The report’s message is that we need to act now to save the world!"

The report outlines the massive impact of the difference between 1.5°C and 2°C. Today, the Earth is already on average about 1°C warmer than in preindustrial times. The 18 warmest years since recording began in 1850 have been registered in the past 20 years alone. The number of droughts has risen, and water resource availability has declined in many places. Most researchers agree that the world will heat up by 3°C to 4°C if no additional efforts are made. A further consequence of climate change is the increase in violent storms. Rising temperatures mean there is more energy and water in the atmosphere. This is then released more frequently in the form of violent weather events with high levels of precipitation. According to the report, keeping the temperature rise to within 1.5°C could significantly reduce the occurrence of droughts and heavy rainfall events.

The special report is of great political relevance. The United Nations’ Framework Convention on Climate Change asked the IPCC to draft the special report, thus it was prepared for the first time at the request of the signatories of the Paris Agreement. The findings will play an important role at the next United Nations Climate Change Conference in Katowice, Poland, in December 2018.

Around 90 international authors worked on the new IPCC special report. Daniela Jacob is one of three climate researchers based at German institutions and took the lead on a chapter covering the consequences of global warming of 1.5°C compared to preindustrial times. As a coordinating lead author (CLA), she was responsible for 60 pages of the 200-page report. Together with two other CLAs, she led the team of 18 authors who worked on her chapter. The lead authors systematically reviewed and evaluated all the available scientific findings relating to the impact of global warming of 1.5°C on humanity and nature. Daniela Jacob: "We evaluated around 1,000 scientific articles. Our work was subsequently subjected to several rounds of reviews, first by experts and then by governments. In total, we received more than 10,000 comments on the 60 pages."