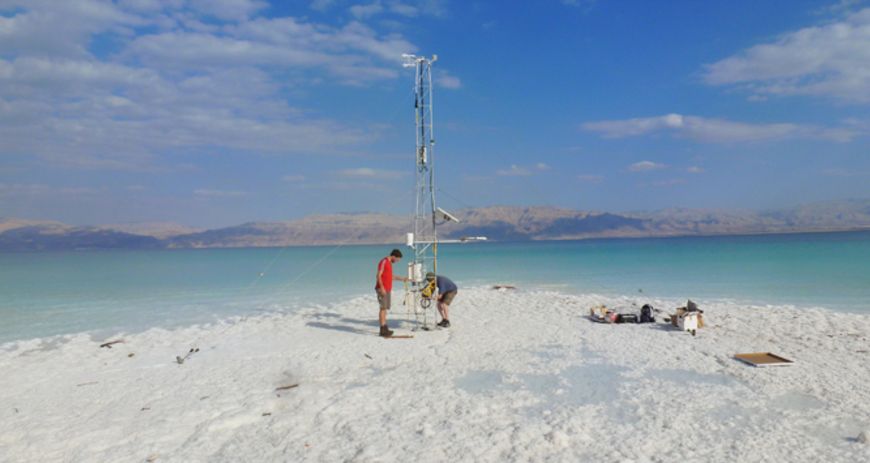 The lowest-elevation monitoring station in the world

Every morning, the commute to their monitoring equipment takes these research scientists along a shoreline-railway that is otherwise used only by tourists in bikinis and swimsuits. In temperatures reaching to 40° C in the shade, they travel to the shore of the Dead Sea, where they have erected a six-meter-high tower equipped with their measuring instruments. The station is situated 428 meters below sea-level

Evaporation of the Dead Sea is being investigated by scientists from the Karlsruhe Institute of Technology in collaboration with international colleagues in the research network of the Virtual Helmholtz Institute Dead Sea Research Venue (DESERVE). They have been collecting data from the measuring station since March 2014; however, the mast – set up directly on the shoreline – will not stay in that position for long, relative to the water-line.  This is due to the fact that the Dead Sea water level has sunk by one meter since the installation, and about 34 meters since the 70’s. One can even observe this extreme recession with the naked eye;  today one has to travel to the beach an additional 1.5 kilometres from the changing rooms that had been on the original coastline – by rail, also used daily by the scientists.

The causes for this extreme recession are numerous. The quantity of surface-water that flows into this sea every year is continuously diminishing. Evaporation seems to have a large degree of influence on the sea level – although precisely how much has remained a mystery thus far. With the aid of initial data from these gauges, research scientists have been successful in collecting information to this end. For the future, they are expecting to be able to make assertions regarding water availability in the region – even if they are forced to travel much farther to get to the beach.