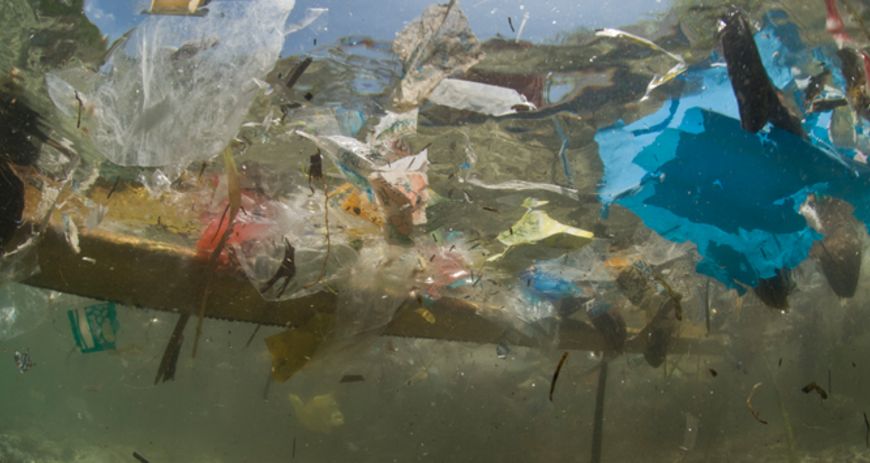 Waste in the Ocean

There are millions upon millions of tonnes of plastic waste floating in the sea. A problem with global dimensions has been developing out of this for many years now. Scientists are investigating the consequences for marine fauna – and are searching for approaches to getting the waste under control.

The idea sounds adventurous - a Dutch inventor wants to install tentacles 50 kilometres long in the Pacific Ocean, to use them to extract waste from the water that is drifting along in the waves. He posted advertisements in the internet to sell his unique construction. Whether or not the waste-stopper has ever actually worked has not yet been determined. But the Dutchman has achieved one thing for sure: "He has focused additional attention on the problem of waste in the sea", says Lars Gutow. "And that is certainly something positive for the time being!"

The biologist Lars Gutow works at the Alfred Wegener Institute, Helmholtz Centre for Polar and Marine Research (AWI), and is dealing with the issue of plastic waste floating in the sea. There is a huge problem behind all this - various estimates assume that, so far, about 100 million tonnes of waste has wound up in the sea, and 75% of that is plastic. Whether it is the Pacific, Atlantic or Mediterranean - the pollution has become a global issue. Nevertheless, it has been said that it is difficult to determine how much plastic is where in the sea. "That is absurd, since waste is actually something quite tangible", says Gutow. "But we still know far too little about how, for example, waste behaves under the influence of currents and wind".

Originally, Gutow had been concerned with the spread of organisms on floating objects such as algae or pumice - until he eventually could no longer ignore the more serious problem of plastic waste. Today he is also involved with gauging the extent of pollution in the German Bight. For this purpose he takes research trips on ships with his colleagues - they observe the waste in passing and make a projection of the quantity over larger surface areas. When they take samples, they evaluate the amount of waste; while recently working with nets that were being dragged over the seabed, they discovered plastic waste in almost every catch.

Waste makes its way to the sea in different ways. It is frequently transported via rivers when it drifts away from insufficiently-secured landfills somewhere out in the back-country, or when it is simply tossed out in the countryside. Waste is also washed away into the sea by natural disasters. The crews aboard ships dispose of their waste in the open sea, and sometimes objects such as fishing gear are simply lost - these things actually comprise, second only to packaging material, the biggest problem. There is no quick solution in sight once the plastic has reached the sea - even a plastic bag requires, according to recent estimates, 450 years before it disintegrates completely.

Once the plastic ends up in the sea, it is eventually overgrown with organisms and sinks. When the organisms die the plastic particles rise up to the surface and a yoyo effect takes place. But when they finally stay on the seabed for good, layers of sediment are deposited over them and the waste remains there. Experts from the German Federal Environment Office (UBA) estimate that 70 percent of the plastic sinks to the seabed, 15 percent floats on the water's surface and 15 percent is washed ashore onto the beaches. But it is not only the view along domestic beaches that is disrupted by waste: lost "ghost nets" continue to snag fish in the oceans, marine animals starve with full stomachs because they mistake plastic for food, and in the vicinity of the coasts in some regions waste collects in unimaginable quantities.

A spectacular phenomenon exists in the Pacific Ocean - an enormous patch of waste. Plastic accumulates along the natural ocean currents in huge areas - particularly visible off the Japanese coast and in the region of Hawaii. Up to two and a half kilos of waste, and up to five kilos according to other estimates, can be found there in one square kilometre. "Pacific garbage patches" is their name in professional circles.

But it's not as if you're looking over the top of a closed rubbish bin, says biologist Lars Gutow: "When you go all the way out there, it's true that what you see is mostly water, but at the centre of the whirlpool the waste density is obviously increasing over time - and this is happening far removed from human civilisation". As is the case with an iceberg, only a fraction of these waste whirlpools is visible. And to make matters worse, the so-called "micro-plastic" can hardly be seen; these are plastic pieces that are smaller than five millimetres in diameter - e.g. fine industrial granulate or rubber abrasion. It occurs most often, however, when larger chunks of plastic waste become brittle due to UV light, and then are slowly pulverised by the motion of the waves. These huge swirling vortices of waste in the Pacific Ocean consist primarily of micro-plastic, and not only on the water's surface; they extend down into the water column to a depth of up to 50 meters. The National Ocean Service of the federal American research agency NOAA therefore compares the water in these whirlpool-regions to a bowl of soup interspersed with peppercorns.

How heavily the sea beds and coasts are impacted by micro-plastic can be ascertained - leastways locally. "In ocean areas like the Hawaii archipelago that lie near an ocean waste whirlpool, we can find up to 30 grams of micro-plastic in a kilogram of coast sediment", explains Mark Lenz from GEOMAR, the Helmholtz Centre for Ocean Research Kiel. He coordinates the GAME Programme in which Master's degree students conduct research on basic interrelations in ecology by means of a global approach. GAME ended up dedicating two consecutive years of research to micro-plastic. "It is particularly important for an ecosystem how plastic pollution affects key species which, for example, provide structure to habitats. That's why we evaluated, at seven locations worldwide, how marine worms and mussels, for instance, reacted to micro-plastic particles." The findings: animals that are already under stress - due to high ambient temperatures or polluted water, for example - react more sensitively. Green-lipped mussels, for instance, from Jakarta Bay, Indonesia, filtered out less water, produced fewer attachment filaments and finally died prematurely given the added burden of micro-plastic in their environment. "Our findings indicate that micro-plastic has a negative impact in interplay with other environmental stress factors", says Lenz.

Lars Gutow as well, the biologist from the Alfred Wegener Institute, is involved with his colleagues in the consequences of micro-plastic for fauna. He is focussing in this regard on small organisms. "We want to know if similar consequences occur wherein some larger animals experience an impact from large plastic pieces." The biologists, ecologists and eco-toxicologists at AWI have thus far not been able to find a clear answer; isopods simply egest the micro-plastic in experiments, while, conversely, the same particles ended up in the tissue of mussels and triggered infections there. "We would like to develop a hazard-matrix that shows us: What characterises - to put it casually - "the typical loser organism"? This depends on the eating technique, the inner anatomy of the animal and the habitat, says Gutow. But research is still in the initial stages regarding these physical effects.

Meanwhile, officials and politicians are interested in the research results from this field. The Marine Strategy Framework Directive of the European Commission entered into force in 2008, according to which the EU Member States have to achieve a "good environmental status in the European waters" by 2020. But what does this mean specifically? In order to outline this, specialised working groups, in which scientists such as Gutow collaborate, propose special assessment criteria and make recommendations for political measures.

The EU-wide Directive, which is intended, since the beginning of 2015, to drastically reduce use of one-way plastic bags, is a realistic step at the political level. But so-called "oxo-plastic bags" will not be generally prohibited in the future. There are metallic salt solutions included in their composition, so that they will disintegrate quicker - but here also, new micro-plastic particles are released.

It is almost impossible to retrieve plastic from the sea, this is clear. "The lion's share of measures that we develop focuses on avoidance of further waste making its way into the sea", says marine scientist Stefanie Werner from the German Federal Environment Office. "For this purpose we have to take into consideration waste and waste-water management, leisure activities at sea and on the coasts, shipping, fisheries and many other factors." Even though there is a good infrastructure for waste management in Germany, for example, even here only 42 percent of the plastic waste is currently being recycled; many plastic products are not recyclable at all because of additives. The rest mostly ends up in a refuse-incineration unit. In order to avoid an increase in waste entering the planet's oceans in the future, it is important to work together at an international level and to make sure that the rate of recycling increases.