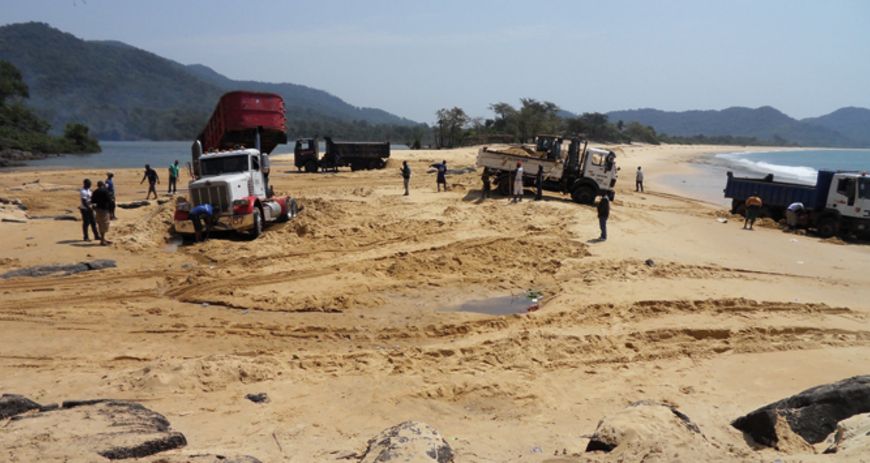 <b>Resource Sand</b> In John Obey, Sierra Leone, sand mining is still a problem today. In the year 2014, President Ernest Bai Koroma issued an order to inhibit sand mining. The result: Operations were cancelled for two weeks, and then continued at the same level as before. Photo: Eimer Peters

“Like sand on the beach” – nothing of the sort!

Worldwide deposits of sand are running short: Unbridled demand, mostly from the construction industry, is in the meantime endangering the entire ecosystem. Even research scientists are hot on the trail for this underrated raw material.

Sand as far as you can see, millions of square metres, flat or piled up in impressive dunes:  The gigantic sand mountains of the Sahara are up to 100 metres high, can add up to more than one-million tonnes of sand and shine yellow, beige, light grey and orange. In other regions of the Earth, sand is snow-white, dark-grey, speckled of even blood-red – in innumerable shades of colour that the naked eye can hardly appreciate, depending on which stones were involved in the formation of the sand thousands of years ago.

But sand has more than just an aesthetic attraction: Along the coasts and on the seabed, it serves as a playground for thousands of living creatures. And it’s a bulwark against the lashing waves, weakens their unrelenting force, thus protecting the coastal inhabitants. But it is precisely this ecosystem that is endangered in many places: The sand is disappearing – it is being exploited in huge quantities. For concrete, glass, computer chips, paper, cleaning agents, toothpaste, cosmetics and many other things – it is an indispensable component. According to statements made by the United Nations Environment Programme (UNEP), no other resources, only with the exception of water, is being consumed in such large quantities. “Sand, rarer than one thinks” was hence the title for a dossier released by the Programme in 2014. Due to the enormous demand, costs for sand have increased explosively in recent years – and it has become a subject of research for scientists who are searching for alternatives.

“Sand is the unknown hero or our time,” says the British geologist Michael Welland from the University of Nottingham: Neither skyscrapers made of reinforced concrete, nor streets would be imaginable without sand. 15 million tonnes worldwide are being mined annually from nature, on land or in the ocean. The ocean sand is for example very suitable for the production of concrete, because cement can adhere optimally to the typically irregular-shaped, rather angular grains. For mining, huge floating suction dredges are deployed in which the nozzle can reach down as far as 150 metres. Desert sand, which is actually much more available, is not suitable for many areas of application because of its smooth, round granular shape (interview p. 12), so that ocean sand is utilised when there are no other sand and gravel deposits available.

In Saudi Arabia, an entire coral reef is dying; in other regions algae and seaweed are suffocating

The consequences of sand mining for the ecosystem are often times devastating: the suction nozzles stir up the sediment along with its inhabitants and leave behind huge holes in the seabed.  And the oceans react sensitively to changes: The dredges disturb a complex sequence of layers – from the water surface down to the sediment.

“Even the procedure of suctioning up sand represents a disruptive factor; sand-dust trails spread out for kilometres around the mining site, the sediment is re-deposited at other locations where it really doesn’t even belong, and where it changes the composition of the sediment or buries the ground organisms living there,” says Martin Wahl. He is a marine biologist at GEOMAR Helmholtz Centre for Ocean Research Kiel, and a member of the excellence cluster “Future Ocean” that is based there. In Saudi Arabia Wahl observed how an entire reef is dying, because foreign sediment is covering and suffocating the coral due to sand mining. In other regions, algae and seaweed are being covered with sand and suffocating.  In his area of research – marine ecology – Wahl also busies himself with stress factors in the ecosystem. “Algae and seaweed are essential for the ocean’s hygiene. They bond carbon dioxide (CO2) and produce oxygen. If an area of ten square metres is suctioned up, that does not represent a problem – but if it is ten square kilometres, that becomes a big problem.”

When beaches are dredged until empty, there is no more sand to be washed back into the ocean; regeneration is hardly possible

Animals that live on the seabed – snails, worms, echinoderms or small crabs – take their nutrition from the upper layers (flooded with light) of the ocean. This so-called Bentho-pelagic coupling – the intake and discharge of nutrients at the interface between sediment and water – is an important process in the global carbon cycle. In this manner, thus, the carbon dioxide on the ocean’s surface bonded by photosynthesis is transported into the sediments on the seabed. If the living conditions for the animals in the sediment deteriorate, they will migrate. This initiates a chain reaction: “Because the smaller living organisms comprise the nutrition for larger fish, they migrate from the area as well. And so on. At the end of the chain we have the fishermen, who can no longer catch anything in their traditional territories,” says Wahl.

Wahl’s colleague Klaus Schwarzer, geologist at the University of Kiel, busies himself with the long-term consequences of sand mining. “Every coastal region regenerates itself in a different manner – quickly or not at all – there are no formulas,” he says. If for example beaches are dredged until empty for the production of concrete and they leave sheer stone behind – as was the case in Morocco - there is no more sand to be washed back into the ocean, and regeneration is hardly possible. In the Andaman Sea off the coast of Thailand in the context of a tsunami project, Schwarzer has seen veritable lunar landscapes under water: “There was hardly any life.” It was not sand, but the mineral cassiterite that was massively mined there; it is needed for zinc production. An oxygen-poor milieu had formed in the craters. Similar things can happen in large, deep sand-excavation holes.

In the Baltic Sea and North Sea as well, Klaus Schwarzer examined excavation holes in the context of several research projects a few years ago. “Off Fischland on the West Pomeranian Baltic Sea coast, relatively fast regeneration occurred; conversely, in Tromper Wiek off the coast of Rügen, we could still see traces of excavations, after 15 years, from the GDR era.”

And in the North Sea off the coast of Sylt, it is apparently taking even longer – “In the holes where sand had been suctioned off for landfills, there was more or less no regeneration to be seen after a number of years,” says Schwarzer.

About half of the sand replenishment driven by rivers never reaches the sea, due to reservoirs and the straightening of watercourses

“It is a dangerous mistake to believe that sand is a quickly-renewed resource. This is not true,” warns the geologist Kay-Christian Emeis,  Institute Director at the Helmholtz Zentrum Geesthacht – Centre for Materials and Coastal Research. “Sand is basically nothing more than a crushed product from geologically older stones that arises through erosion. But this process takes tens of thousands of years,” explains Emeis. “Sand is crushed by glaciers and transported by rivers into our lowland plains, onto the coasts and into the ocean. Through physical effects – the energy of the flowing water, the friction on the ground in the river bed – sand gets its typical granular size and shape."

The disappearance of sand and the shrinking of beaches are not related exclusively to dredging and sand suction devices; rather, it also has to do with artificial interventions into nature, says Emeis. Dams for example that intercept sand on its way to the sea, or river straightening and concrete walls that are built as protective walls along the coasts influence the natural transport of sand. For this reason, about 50 percent of the sand replenishment driven by rivers never reaches the sea, according to estimations by experts.

In wealthy oil nations such as Dubai, sand literally forms the foundation: The artificial island worlds “The Palm Jebel Ali“, which the Emir of Dubai had created along his coast, were heaped up with 450 million tonnes of sand – and not even desert sand, since that would be blown away much too quickly. Dubai imported the sand from Australia for this reason. There, in the northeast along the coast of Brisbane, exists the presumably biggest excavation site for marine sand worldwide. Australia earns five billion dollars per year by exporting sand.

But the real problem is illegal sand mining. Sand long ago became the object of criminal schemes, primarily in regions of the world that were not covered by glaciers in the past. They don’t have huge inland sand and gravel deposits at their disposal, from which they can excavate construction sand. This was shown by the French film-maker Denis Delestrac in 2013 in his documentary “Sand – the new environmental time bomb.” His film moved the United Nations Environment Programme to finally include the disappearance of sand in their agenda.

There are alternatives for such massive mining of sand, for example the recycling of building rubble.

While strict laws in the EU regulate sand mining and, for example in Germany and the Netherlands, sand from the sea is used almost exclusively for hydraulic filling, in other words for reclamation or for coastal protective measures, hardly anyone in emerging and developing countries such as Morocco, Thailand, India or Indonesia is concerned about prohibitions. Frequently the only thing that counts is that wealthy neighbouring nations such as the United Arab Emirates or Singapore are ready to pay enormous sums for something that is lying around, free of charge, on their own beaches.  The consequences are serious – in Indonesia for example, two dozen islands have already sunk due to erosion. What climate change hasn’t achieved there yet, the sand suction devices will. Human beings are losing their homes and livelihoods. “And the vicious circle of sand mining goes on, if thousands of homeless island inhabitants have to move to another island and new houses have to be built there in order to accommodate them,” says Kay-Christian Emeis.