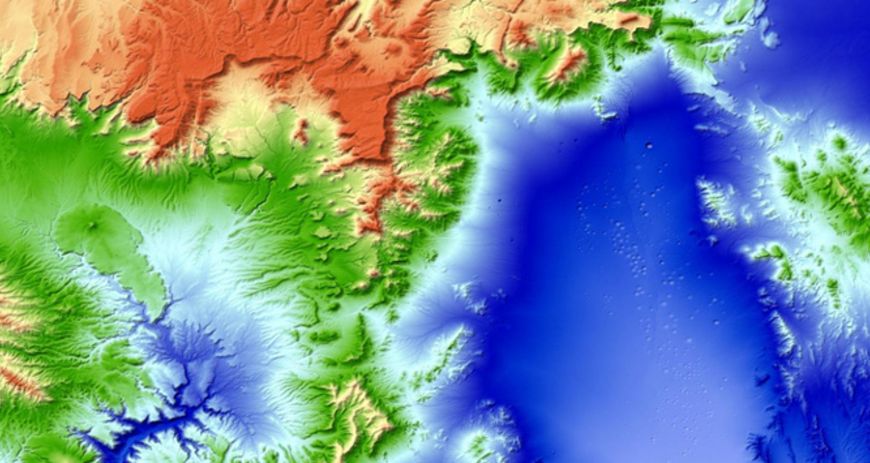 The "Nevada Test Site" was, from 1951, the venue for numerous nuclear tests. The desert area, 100 kilometres northwest of Las Vegas, is dotted with explosion craters. Image: DLR

The most precise map of the world

The Planet Earth in 3D, and more precise than ever before! Research scientists create, with the aid of two satellites, a map of the world that has 30 times more precision.

Those people who are planning an ‘active’ holiday usually take along a lot of gear – and this certainly includes a detailed hiking or biking map with precise elevation readings. But this is sometimes easier said than done – this is due to the fact that only inconsistent or even patchy maps exist for certain areas. And this is something that is inconvenient not only for active holidaymakers; it is particularly annoying for researchers who are, for example, dependent upon extremely accurate data for their observations of climate change. But this unsatisfactory situation will be a thing of the past.

This is because research scientists and engineers from the German Aerospace Center (DLR) re-recorded, by the year 2014, the entire ground surface of the Earth, involving some 150 million square kilometres. The survey was carried out with the aid of two satellites with a dimension of 12 X 12 metres. For the first time, differences in terrain altitude can be recorded with precision to two metres. Furthermore, this time the polar icecaps as well have been mapped – in contrast to the older data from a NASA mission from the year 2000. “From this data, we are creating a globally unified map of the world. Its 3D information content is at least 30 times more precise than currently available data sets, and it also covers, at this same level of resolution, areas north of the 60th parallel and the Antarctic”, explains the project leader Dr Manfred Zink from the DLR in Oberpfaffenhofen.

The strikingly sharp images from orbit originate from two almost identical satellites that are circling the Earth at an altitude of about 500 kilometres. The first of the two satellites – TerraSAR-X – has been collecting data in space since 2007. In 2010 his twin-brother TanDEM-X was added. Both satellites are flying only a few hundred metres apart from one another in a carefully devised formation. The distance between them has been gauged with millimetre precision. And that is the trick here – each satellite observes a point on the Earth’s surface from a slightly different angle of vision. The satellites transmit radar waves down to the ground that are reflected back from the Earth’s surface and ultimately intercepted. The researchers can precisely measure the distance covered down to fractions of a wavelength. When one relates these detected distances to the exact gap between the satellites, one can calculate the exact altitude of the terrain. Similar to the way that a human being can perceive spatially with his two eyes, a three-dimensional image emerges as a result.

But what are the actual benefits of such accurate maps? As long as the satellites are in orbit, they are delivering extremely beneficial photos of environmental changes on the Earth. Climatologists are able to ascertain, for example, to what degree the polar icecaps are melting. After violent earthquakes, geologists can get a quick overview of geological changes with the aid of these satellites. These data are equally useful for observations of flooded areas and the run off of floodwaters. Because these maps are indispensable, research scientists from all over the world are allowed, upon application, to make use of them. Furthermore, the data are commercially utilised, since the TanDEM-X mission was implemented on the basis of a public-private partnership.