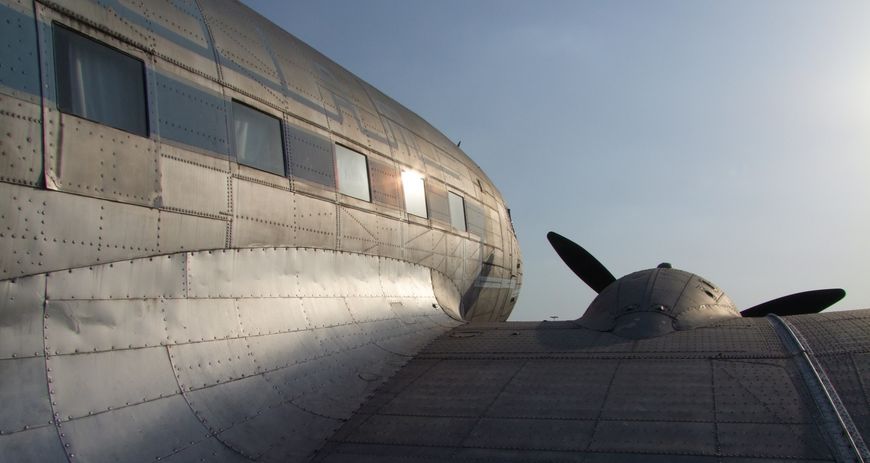 More lightweight, more economical - and naturally safer: these are the aims - aeroplanes are a real challenge for the materials scientists. Research scientists in Geesthacht are working on a process which could take off and lead the way for the jets of tomorrow

It was 28 April 1988 when the face of aircraft construction changed forever. An Aloha Airlines Boeing 737-200 was flying at an altitude of over 7,000 metres when a large piece of the fuselage blew off, suddenly transforming the jet into a cabriolet and forcing the pilot to struggle to make an emergency landing. The cause of the disaster, which left one person dead and 65 injured, was a crack which had formed between two rows of rivets in the aircraft skin.

"If you can build aircraft without rivets then it is practically impossible for this kind of accident to happen", said Norbert Huber who heads up the Institute of Materials Research at the Helmholtz-Zentrum Geesthacht. He and his colleagues are working on innovative ways of joining the different parts of aircraft fuselages. Safety is a key factor - as is the quest for weight reductions which should make flying much more environmentally friendly in future.

A glance at the statistics shows how important the research is, with worldwide commercial flight rising by around five per cent every year. Airbus estimates that around 30,000 new jets will be needed in the next 20 years, which is a huge figure. The big revolution in the struggle to shed the kilos at the design and construction stage is just beginning. Boeing mainly uses carbon fibre composites (CFRP) to build its twin-engine 787 which is already in operation. The new Airbus A350, which is scheduled to go into service at the end of 2014, will also be made of the more lightweight material. The manufacturers promise a saving of about one fifth on the operating costs of these aeroplanes because of the new method of construction. The benefit will be most lucrative with large aircraft. Jorge dos Santos, materials scientist in Geesthacht, sounded a note of caution, however, explaining that "around 80 per cent of the jets which will be built in the next 20 years will be the narrower models with just one central aisle ("single-aisle aircraft"). As plans stand today, these aircraft will still be built of metal. With CFRP it is primarily a question of cost - of both material and manufacture - plus the recycling problem with CFRP has not yet been resolved and adversely affects the whole carbon footprint". Dos Santos is working on making metal more attractive for the aircraft construction of the future - by improving joining and bonding technology.

In most cases aircraft fuselages are still made of high-strength aluminium sheet with the individual skin panels riveted together. There were around half a million rivets in an Airbus A310 made in the 1980s and there are about five times as many in a Boeing 747. The modern Boeing 787 with its CFRP fuselage only needs about 20 per cent of the rivets used in an aeroplane made in the conventional way out of metal. This is a great advantage because riveting is a time-consuming job.

"In relation to the structure as a whole, it takes about one minute on average to fit a rivet", said Norbert Huber. Rivets also contribute additional weight and affect the quality of the aerodynamics, then there is the susceptibility to the formation of cracks in the holes which have to be drilled especially for them. The Geesthacht research scientists have found that welding may be an alternative to riveting in metal aircraft construction. Laser beam welding processes are already in use today on a small scale, on the smallest Airbus models, the A318 and A319, for example, and on the biggest, the A380. However, the industry has been hesitant in its response so far. "We still have to convince the aircraft manufacturers who often have their concerns about the joining technique", said Jorge dos Santos, "because the material is changed by the heat". This applies to conventional fusion welding processes at high temperatures of up to 700 degrees Celsius. The demands on such joining techniques are extremely high. "They must be economic and efficient with high productivity rates and, most importantly, they must meet the safety requirements in aircraft construction. A weld seam must hold for the entire service life of an aircraft", said Norbert Huber.

The Helmholtz research scientists in Geesthacht are therefore advocating a relatively new welding process which was only patented in 1991 and has been in use in industries like rocket construction and shipbuilding since the middle of the 1990s: friction stir welding. "In this case the work is done at much lower temperatures of around 400 degrees Celsius. There is no melting process; instead the material is first softened to a dough-like consistency by the frictional heat and then mixed", explained dos Santos. "Shear flow is generated by the rotation of a mechanical tool, like stirring yoghurt in a pot", added Norbert Huber, drawing on his innate expertise in the mechanics of materials, "and when it has cooled, the material forms a new and very much finer microstructure which has excellent mechanical properties. Any loss of quality which might be suffered in the heating process is compensated for in part by the finer microstructure".

Friction stir welding has a variety of advantages for aircraft construction. "It is a robust process which does not react to minor nonconformities and this makes it an ideal method of production", said Jorge dos Santos, and it is already half as fast again as fitting rivets, "we can do one-and-a-half metres a minute now", added the materials scientist. It is also lighter, with a saving of half a kilogramme per metre of weld seam in comparison with a riveted construction. It also lengthens the service life of the aircraft structure because there is no potential source of tearing and no potential for the formation of fatigue cracks as there is with rivet holes - which was the cause of the disaster on the ill-fated Aloha Airlines flight. Brazilian aircraft manufacturer Embraer has already run simulations with friction stir welded parts and has achieved six times the life cycle of a normal aircraft without any cracking. The potential use of the new process could extend beyond skin panels to the window frames on aircraft which are always riveted today. "We can save another 200 grammes on each window", said Huber.

The research work at the Helmholtz-Zentrum Geesthacht does not stop at pure theory, but the practical feasibility of innovations is also put to the test. The Materials Mechanics division has its own laboratory to conduct tests on joints. It is equipped with two robots for complex 3D welding and a six-and-a-half metre long gantry robotic system which the scientists use to test their developments on aircraft shells for the future generation of medium-sized aircraft. Manufacturers like Embraer and Airbus supplier Premium Aerotec have been working in partnership with the Helmholtz research scientists for a long time. "The robotic systems which we use are state-of-the-art prototypes which we have built especially for this work in the last few years for around three million euro".

A simple demonstration line is also sufficient for Jorge dos Santos to demonstrate what happens in the friction stir welding process. He puts in two metal sheets on top of one another, each one two millimetres thick, and lets down a steel tool the size of a baton. At its tip is the shoulder, as it is called, which is 13 millimetres wide, and at the end of this shoulder there is a threaded pin which is 1.9 millimetres long and 6 millimetres wide. "The tool only costs 200 euro. "We can do 1.2 kilometres of weld seam with it without any problems", said dos Santos, gently sinking the pin exactly 1.9 millimetres into the metal sheet while rotating at a rate of about 1,200 revolutions per minute. After about five seconds the penetration and heating-up processes are complete and the welding process begins, with the pin moving swiftly forwards over the metal sheet. A little heat can be felt in the area and, before long, an extremely strong bond has formed joining the two pieces together. For a welding process it is all very unspectacular - there are no bright arcs and no smell of burning. And this is exactly how the research scientists in Geesthacht are demonstrating that they are getting closer and closer to achieving their aims. Floor panels in the new Airbus A400M military transport plane are already being joined with friction stir welding processes, and in future the process is due to be rolled out on a grand scale in civil aircraft production.