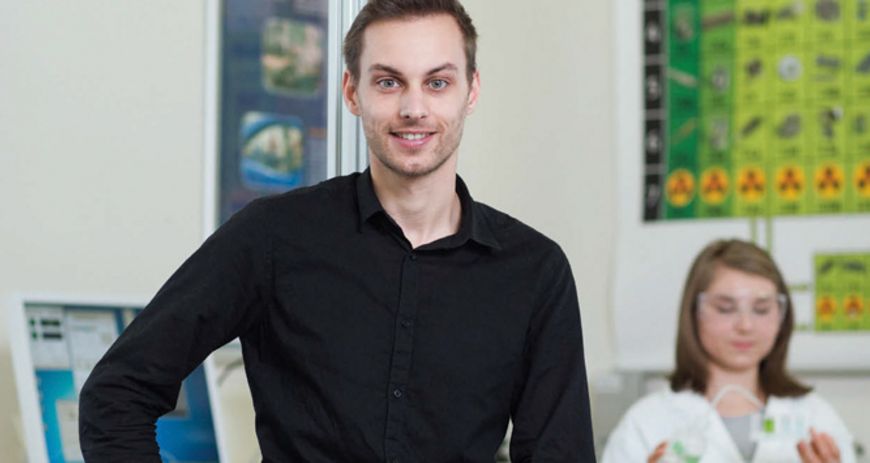 Colourful gift packages are lying on the table carefully packed in plastic. 15 students inquisitively shake and rotate the boxes back and forth. It clatters and rattles. There are blocks of Styrofoam glued together in each package, through which a marble is invisibly rolling along a pathway. The vocational-school students from Riesa who are visiting the school lab of the Helmholtz-Zentrum Dresden-Rossendorf today are supposed to find out what the maze in the interior of the packet looks like. It only takes five minutes for them to meticulously start drawing out the structure on the blackboard.

Matthias Streller, instructor in the school lab 'DeltaX', is quite satisfied. He props his arms up on his hips and proclaims: "What you've been doing just now is called research!" The students look at him sceptically. Streller, with piercing blue eyes and dark-blond hair, appears to be rather slight among these adolescents, some of whom are a full head taller them himself. He continues in a strong voice: "Even professional research scientists work like this! They go on with their experiments to get closer and closer to the truth." But, he adds, there is never only just one truth. The students, who are used to only getting a lecture with inflexible facts, are amazed by this revelation.

"This is why I always begin the experimental-day with this experiment", says Streller with a wry smile. He is 29 years old and has been involved with the school lab since its founding four years ago. "I'm interested in the challenge of how to motivate students to critically analyse things." That's also the reason that he appreciates having more freedom than state-school lesson plans would allow; the man from Riesa is a maths and physics teacher, and studied at the Technical University Dresden. "Even back then I was especially interested in teaching methodology", Streller explains and admits: "I never felt like I was a teacher from the 'old school'."

In the school lab DeltaX - one of 30 school labs within the Helmholtz Association - he has found, however, precisely that task that fascinates him most; he has noticed that with every student group he and his colleagues look after daily, they eventually reach the point where the initial sceptical attitude gives way to enthusiasm. And this means enthusiasm for the natural sciences, which usually aren't included among their list of favourite subjects in school. "This transition is so exciting to me that I am actually writing my doctoral thesis about it", says Streller. He is attempting to find out through his PhD research what sort of impact such an experimental day has upon the students. Can he serve as some kind of spark, igniting their long-term curiosity about natural-science topics? "We know now that there is an after-effect, but we don't exactly know yet how it can be increased. Moreover, I want to find out to what degree this ignited interest actually impacts career and study-programme selection."

In order to get to the bottom of the situation, Matthias Streller spent more than six months at a pioneer facility overseas; the Weizmann Institute near Tel Aviv in Israel maintains ten laboratories for students at two different locations - in other words, plenty of reference material for Streller. The diversity evident in the Israeli classroom lessons is what impressed him the most; classic natural sciences, biotechnology, environmental technology and IT make up the core curriculum. He feels that German students also have a high level of comprehension regarding the fundamentals of the natural sciences. "But the subjects could be taught in a more application-oriented manner - particularly in such a manner that more girls would be interested." This is because female students are enthused about experimentation - something that he has confirmed again and again. Although they are more reticent in the beginning, they develop a lot of good ideas later on. And that is what makes the difference. "Students should learn from us to work independently and pursue their own thoughts." This doesn't always work out right away. Streller admits: "It happens sometimes that teachers here in the laboratory correct their students or give well-intentioned advice." Whenever he observes this, he intervenes at once - friendly, but decisively. He adds thoughtfully: "The problem is that teachers often times don't have enough confidence in their students."

Matthias Streller wants to complete his doctoral thesis soon. In order to unwind after the long work-day, he sometimes jogs through the "Terrassenufer quayside" in the Dresden old town, or in the meadows along the river Elbe. He listens to Hebraic language through his headset along the way - he still has fond memories of his time in Israel. It made a big impression on him, he says - cordiality, hospitality and making new friends. But he also experienced borders and immovable barriers - for the first time in his life.

"I came to really understand the European idea", says Streller. That research is an open site for people of all nations - this is another gift that he would like to present to his students.