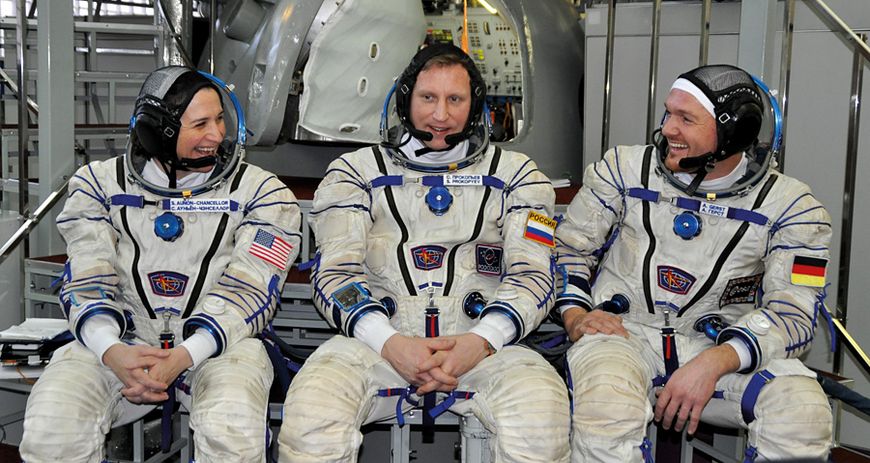 So your training is focusing on coping with breakdowns right now?

We’re at the point now where the focus isn’t on learning new things, but rather going over them all again and fine-tuning our communication so we can learn how the other members of the team communicate. We’ve done a lot of emergency training together, not just in the Soyuz, but also on board the space station. And the scientific experiments are starting to take shape now as well. In other words, we’re really starting to practice the specific experiments that we’ll be performing on board − and we are serving as guinea pigs ourselves, too. For example, we are regularly checked by MRI scanners and have blood samples taken. That happens especially in the final weeks and months before the flight.

What else do you have on the agenda in terms of scientific work?

We’ll be carrying out a wide range of experiments again this time, for example in the material sciences area. One experiment involves studying granulates for industrial processes. We would like to gain a better understanding of the physical behavior of granulates, which is important in areas such as pharmaceuticals and the construction sciences. People in these fields need to know how cement or sand mixes, or how to bottle medicines so they always contain exactly the same substances. In order to do this, you need to study fundamental physical conditions, and we’re able to do that on the space station. We’ll also be doing experiments that examine alloys and how crystals grow. And there are a few experiments that focus on immune physiology that aim to help us gain a better understanding of the human immune system and different types of cancer.

You already spent time on the ISS in 2014 with the Blue Dot mission. What will be different for you on this second mission?

I have a better idea of what’s important and what isn’t this time. The art of being an astronaut consists of separating useless information from the useful and filtering it. This is especially important for me now, because as commander I need to identify spare capacities. Previously, I didn’t really know how much work would actually be involved before the flight. There are a lot of things that have to be coordinated with the crew; for example, every member of the team needs to be given the training that he or she requires. You also have to make sure that everyone on the crew and at the ground station knows each other well. If you subsequently run into a problem while you’re in orbit, it’s extremely important that you don’t end up getting a call from someone you’ve never met before. It’s much easier to solve a problem if you know each other. And all of this makes for a truly fantastic mission. I think it’s great fun because I know that I can really make a difference in a situation like this thanks to the experience I have. If some of my colleagues haven’t been on a flight before, I may be able to alleviate some fears or concerns they might have. And it’s fun to see how the crew comes together and how everyone grows in terms of what they’re capable of as a team.

You and your crew are together around the clock on the ISS. Do you get on each other’s nerves sometimes too?

During my last flight, I can honestly say that we didn’t run into any situations where we truly got annoyed with each other. It comes down to the fact that we don’t just get thrown together as colleagues. We spend so much time training in extreme situations − for example in temperatures of around -30° Celsius during winter survival training, where you sit outside in the snow at night without a sleeping bag or a tent. So those sorts of things come out ahead of time. You get to know each other and start to understand when someone needs a little time to themselves. There’s also the fact that the space station is very large. It’s almost as big as a Boeing 747 – with only six people on board. So a lot of the time you might actually spend half a day or even a whole day working in some module or other without seeing hardly anyone at all.

You’re all from different countries. What language do you use to communicate with each other?

Russian is the official language in the Soyuz capsule. But we can always switch to English if we need to. So we end up switching back and forth on the space station. Sergei Prokopiev will often answer in English, while I answer in Russian. We call it Runglish.

What happens if one of you gets sick while you’re up there?

Now that we have Serena Auñón-Chancellor on the team, we’ll have a doctor along this time. That is a bonus, of course. But we have all been trained as CMOs, or crew medical officers. This means I can administer basic treatment myself, but it’s really quite limited. I could pull a tooth, stitch up a wound, or draw blood, but an appendectomy would be out of the question. For everything else, you get help from the ground crew. We always have a flight surgeon at ground control who is ready to help me out and can tell me: cut here, stitch here or give a shot here. But if something really serious happens, then yes, we would have to fly back home. We always have the capsule we left in, and it’s cleared to fly home at any time. We would be back on Earth in a matter of a just a few hours.

What will you be taking along in your personal luggage?

I spent an incredible amount of time thinking about it last time. And I placed a lot of significance on that kilo and a half, because I thought there would definitely be moments when I’d be sitting up there feeling homesick. But to be honest, I found that I really don’t need anything up there. Logistically speaking, you have everything you need: food, clothes, and so on. I think the things that were and are important to me are pictures of my friends and family, and maybe a few mementos that I can hang up in my cabin. Besides, the communication options up there are really good. I can call my family on my cell phone every day.

Do you have any favorite places on the ISS?

One great place is the cupola of the ISS. But I always liked spending time in some corner or other that I’d hardly ever been in before. As an astronaut working on our side, there are modules that I only end up visiting very occasionally, such as the Russian science modules. We can fly anywhere we want to inside the station. Sometimes I just sat down on a seat in my Soyuz and spent some time looking out the window as well. And all of the modules have windows too, which are relatively small in comparison to the cupola but give you a different view of the space station. Or sometimes I also like to look up, which isn’t something you see very often. Most of the windows in a space station like ours face down toward the Earth − the space station is always positioned so that the Earth is below. And it’s incredibly beautiful to look up sometimes too and suddenly see the Milky Way.

You are commander on the ISS now, which is something that many people likely dream of. What other dreams do you have?

I’ve never been short of dreams so far. And the fact that some of my dreams have come true hasn’t diminished the others. I still find traveling just as exciting as ever − I’d like to maybe check out a few more volcanoes, or visit the Antarctic. I’m looking forward to hiking in the Himalayas with my partner. These are all things I dream about. Traveling to the ISS is amazing, but of course every one of my colleagues and I also dream about flying even farther out, to the Moon and to Mars; to go on that adventure and discover the secrets that await us humans out there. Understanding more about our neighbors in the cosmos could be extremely important for our Earth. And I would like to play a role in this, because I enjoy shedding light in dark places. I think this is the reason I became a scientist: I didn’t just want to find things out for myself; I was only satisfied once I’d written them down and shared what I had learned with others.

Alexander Gerst is a European Space Agency (ESA) astronaut. Between May and November 2014, Alexander spent six months on the International Space Station for ESA’s Blue Dot mission. He is returning to the ISS between May and December 2018, fulfilling the role of Commander for Expedition 57. Alexander is a geophysicist and a volcanologist.

Horizons – the new mission of Alexander Gerst (ESA) (in German)