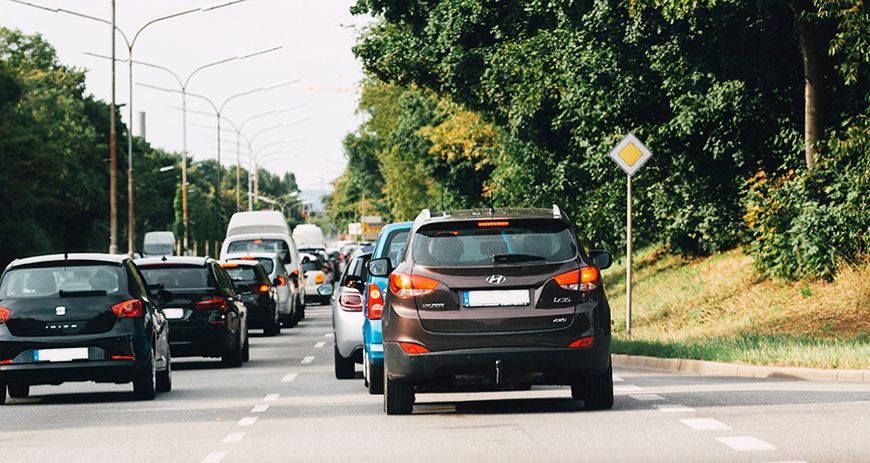 The traffic turnaround is stuck in traffic

Clogged roads, traffic jams, unpopular public transport: Germany is still a long way from a real turnaround in traffic. The Corona pandemic is further exacerbating the dominance of the car. Researchers are calling for the privileges for passenger cars to be abolished.

"One thing has been clear for a long time: Without a turnaround in mobility, the energy turnaround will not work," says Anne Klein-Hitpaß. The scientist is project manager for urban mobility at the think tank Agora Verkehrswende. She has commissioned a study to take a closer look at the current status of the transportation transition and to identify possible construction sites.

The car - the German's favorite child

Claudia Nobis and her "Traffic Behavior" working group at the Institute of Transport Research at the German Aerospace Center (DLR) have found several of these. "It almost seems like a law of nature that the passenger car fleet in Germany is growing by 500,000 to 700,000 vehicles every year," says the researcher, summing up one of the most important findings from her study. "This constant increase in cars is really a major challenge," Anne Klein-Hitpaß picks up the thread. "If all of Germany got into their cars today, no one would have to get into the back seat. Everyone would find room in one of the front seats. That's very sobering."

Even ignoring the climate, and environmental impacts of car traffic, the sheer number of passenger cars is a problem. "That's because cars take up a lot of public space while moving very little." On average, the study says, a passenger car is used for only about 46 minutes a day. It spends the rest waiting in private lots or public parking lots for its next use. "This shows us the high value placed on the freedom that having your own car undoubtedly offers," says Claudia Nobis.

"If all of Germany got into their cars today, no one would have to get into the back seat."

But it is not just the sheer number of cars that is increasing. We Germans are also driving more and more - across all segments of the population. For Anne Klein-Hitpaß, this is a cause for concern, and not just because of emissions. For these could be minimized with electric cars, for example. "However, the goal cannot be to replace today's passenger car fleet one-to-one with electric cars," she says. "Of course, it's not about restricting people's freedom either, but about abolishing the privileges that cars enjoy over other means of transport," she clarifies her point of view. "It's a distortion of competition." Cars, especially parked cars, block space where bike lanes could be built or bus lanes constructed, for example. However, municipalities have so far been subject to legal limits when it comes to the prices of residents' parking permits or fines for parking violations.

To get more people to switch from cars to climate-friendly modes of transport, all modes should be treated equally. "In order to change this privileged treatment, the current road law, in particular the road traffic regulations, must be adapted," she says. "Municipalities need more room for maneuver in order to be able to implement measures for climate-friendly mobility and livable cities." This also includes attractive public transport services, which need to be significantly expanded in many places, she adds.

This is particularly important because public transport remains a problem child of the transport turnaround. Claudia Nobis' research confirms this. "We found that public transport is the least popular of all means of transport in terms of use, and satisfaction with it is the lowest." However, she adds, this depends heavily on respondents' preferences. Those who frequently ride buses and trains have a milder opinion of public transportation than supporters of individual transportation.

"We need to eliminate the privileges that cars enjoy over other modes of transportation."

But there are also bright spots. "People are cycling more," the DLR scientist is pleased to report. "Cycling is popular at all stages of life, and not just for sport." By and large, however, she adds cautiously, the increase in trips would only show up in the total number of kilometers after the decimal point. That's because bike miles make up a very small percentage of total traffic. And for another reason, this trend can do little to change the overall picture of transportation transformation. "We are observing a strong motorization of seniors," says Claudia Nobis. What at first glance sounds like a self-determined way to spend one's life harbors potential problems for Anne Klein-Hitpaß. She explains, "It's the baby boomer generation that is retiring today with their own cars. And that's a lot of people in absolute terms. That almost completely cancels out the positive developments in bicycles, for example."

And yet another circumstance is throwing sand violently into the gears of the transportation turnaround: COVID-19. "The Corona pandemic is a very sharp and hard caesura," Anne Klein-Hitpaß summarizes. "Cars and bicycles are benefiting, and public transportation is coming under pressure." Claudia Nobis has investigated how traffic behavior changed during the pandemic in three studies.

One important finding: "People who are on the move get into their cars and onto their bikes - at least as long as the weather cooperates. In public transportation, on the other hand, people feel uncomfortable." Of course, there are differences here, too. Those who were already traveling multimodally before the pandemic, i.e., flexibly choosing between different modes of transportation depending on the situation, are finding it easier to do so now as well. Nevertheless, for Claudia Nobis, one major danger is obvious: What started as a perfectly understandable reaction to an unusual situation can become entrenched the longer it lasts. "If the pandemic had been over after the first wave, everything would certainly have settled down again," the researcher believes. "But now there is time to learn new routines over months. And that increases the risk that these will persist beyond the pandemic." One new routine, she says, is that more and more people are using private cars - regardless of the season, in summer and winter. If this trend becomes entrenched, it would be a further damper on the transport revolution in Germany.

DLR study on mobility in the Corona pandemic​​​​​​​