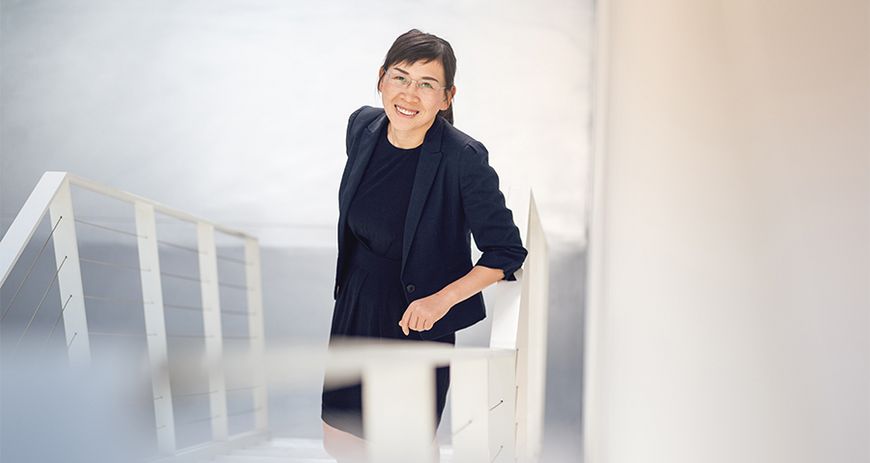 In the mine of data

Since her childhood in China, Xiaoxiang Zhu has been fascinated by space. Now the data scientist has found her dream job: At the German Aerospace Center (DLR) she analyses huge amounts of information sent to Earth by satellites.

Xiaoxiang Zhu can still vividly remember one of the student projects: It must have been in 2007, the Chinese woman had only been in Germany for a few months and her professor confronted her with a task that would shape her future career. "I was in a team with four fellow students and we were supposed to develop a satellite mission," recalls the now 35-year-old, whose fascination with the task at the time is still evident today: "We were expressly asked to think through all the details - from the satellite's sensors to the entire IT system behind it.

It was as if a circle was being closed in the life of Xiaoxiang Zhu. About a decade and a half earlier, when she was still a primary school pupil in Hunan province in southeast China, she saw a photograph of the Earth taken from space at her father's house. "This blue ball, so peaceful, so beautiful - that fascinated me," says Xiaoxiang Zhu. Her father is a math teacher and supported his daughter in delving into those areas she found exciting. Mathematics and the natural sciences were among them, and early on she added ambition: "These are exactly the disciplines where many think men are better at it. It spurred me on immensely to show that we women too can achieve something in these fields," she says. She has never forgotten this photo of the globe, and when, as a student at the Technical University of Munich, she was later asked to design a satellite mission herself from the seminar room for practice purposes, she thought back to this early childhood memory.

Today, the view of the earth from space has long since become part of her professional life: Xiaoxiang Zhu heads the Earth Observation Data Science department at the Remote Sensing Technology Institute at the German Aerospace Center (DLR). At the same time, she holds the Chair for Signal Processing in Earth Observation at the TU Munich; when she was appointed in 2015, she was one of the youngest professors in Germany at the age of 30.

When she talks about her research, English terms are always mixed into her excellent German, which she has learned in her now almost 14 years in Munich. She talks about her "science questions" and about how she can use satellite data to determine the "population density" in certain areas of the earth; at the same time, she enthusiastically tells in German about a "tailor-made" methodology for processing huge amounts of data. She mixes technical terms from two languages as well as the many different scientific disciplines that she brings together in her 45-member research group: experts in artificial intelligence, computer scientists with a focus on data science, mathematicians and scientists who, like herself, have a background in space technology.

With her team, she works on mapping cities, among other things. "Many of the worldwide migration flows from the countryside to the city end up in slums, and if you really want to improve things there, you first need better information," she explains the background - because especially in emerging countries with rapidly growing megacities, there is often a lack of data on population development. In Mumbai, India, for example, fires often occur because power cables are undersized or incorrectly laid; information about actual demand is therefore crucial.

But how can this data be obtained? Xiaoxiang Zhu takes optical data from satellites to identify the outlines of buildings; radar data, in turn, help to estimate the height of houses. This is already sufficient to create a 3D model. However, it becomes more complicated when it comes to estimating whether the buildings are office and workshop buildings or residential buildings. To this end, the Munich-based researcher and her team also include anonymized social media messages: "We know, for example, that in a residential building many tweets are sent in the morning and evening, whereas in an office building they are sent mainly during the day," she says. To get to grips with these huge mountains of data, what Xiaoxiang Zhu calls "information mining" is needed above all: using AI algorithms to find out what the relevant information is and what can be derived from it. This is pure big data: up to ten petabytes of data are analysed for this purpose.

The fact that she has just taken up her professorship in Munich is due to a coincidence: Xiaoxiang Zhu completed her bachelor's degree in China and had no connection to Germany. "But my boyfriend at the time was planning to go to Germany at the time, and after research I found out that there was an English-language Master's degree course at the Technical University of Munich that fitted my profile exactly," she says. Without further ado, she wrote to the Vice President, and it was quickly agreed: the talented young student, who had already won second place in an international mathematics competition in China during her bachelor's degree in aerospace engineering ("nothing special," she says with a shrug of her shoulders: "The idea was to optimize the timetable for all the buses in a city through mathematical modeling"), was awarded a place at the university - and thus stepped onto German soil for the first time in September 2006. "Actually," she adds, "it was my first time outside of China." She was amazed at the big city, which despite everything looked so different from the huge Chinese cities she knew, and felt immediately at home. For her, Munich is a city in the forest, close to the mountains, full of social activities and with lovely people. In Munich she could find her peace, she said.

And above all: Xiaoxiang Zhu threw herself into her studies, which in Germany were completely different from what she knew from China: "More hands-on experiments", she explains in her mixture of German and English, and reports fascinated by a lecture given by Richard Bamler, Director of the Remote Sensing Technology Institute of DLR. At the time, he was involved in the development of the German radar satellite TerraSAR-X and raved about the task to his students; he even wore a T-shirt with the mission logo during the lecture - so much enthusiasm is evident. Xiaoxiang Zhu rolled up his sleeves: 2011 doctorate, 2013 habilitation, 2015 professorship, 2016 acceptance into the Leopoldina and the Young College of the Bavarian Academy of Sciences, since 2018 head of department at DLR. Now she commutes between the DLR site in Oberpfaffenhofen and the TU Munich, and in between she is often in the mountains skiing or hiking.

And sometimes she thinks about the life she would have had if she had not dedicated herself to science early on. "I would have loved to become a photographer too, then I'd take travel and landscape photos for National Geographic or similar magazines - I'd have fun doing that too," she calls out enthusiastically and pulls out her cell phone. On the screen is a photo of the institute building at sunrise, "that was two or three weeks ago now," she says. And then, of course, there are the photos from her last big trip, she was in Tromsø, Norway, with her camera on the trail of the polar night.

"So many digital photos," sighs Xiaoxiang Zhu, "until you get them all right and save them in a way that you can find them again!" She falters for a moment, then laughs: she is already back from her photographer's dream to her big topic as a scientist - dealing with the digital data mountains.