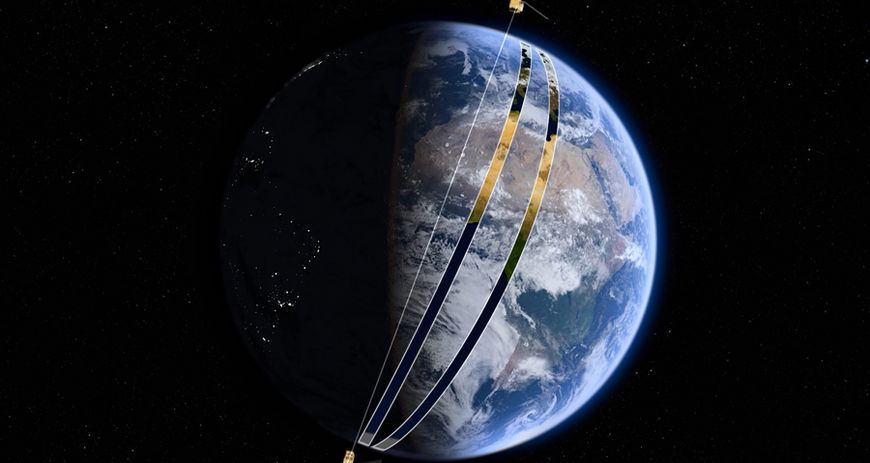 The orbit of two satellites makes it possible: Sentinel-A and Sentinel-B deliver a complete map of the earth every five days. Photo credit: ESA

Earth Observation for Everyone

The aim of the European Copernicus Project is to deliver high-resolution images of virtually every place on earth – none of them older than five days and as a complimentary service that is accessible to everyone. The launch of the Sentinel-2B satellite means that the core of the mission has now been completed.

The European Space Agency (ESA) calls this joint mission of the ESA and the European Union  “the most ambitious earth observation program of all times.” The official name of the program is Copernicus. Measurements conducted on the surface of the earth and the operation of an entire fleet of satellites that continuously monitor the state of the oceans, land surfaces and the atmosphere of the earth. The acquired data are valuable to environmental scientists, but also for many other applications, such as disaster relief efforts, agricultural and traffic infrastructure planning. The open resource availability of the data has huge potential for unrestricted business and civil deployment.

The gigantic success of the ESA research mission Envisat was one of the missions that paved the way for this enormous program. The colossus, which weights a total of eight tons, is the world’s largest civil earth observation satellite. Equipped with ten different earth observation instruments, it crossed every point on earth at least once every five weeks. From 2002 through  2012 it transmitted immense amounts of data that allowed scientists to track sea level changes, ocean temperatures or the poles’ ice coverage.

The enormous benefits of all these data were not the only factors that motivated European scientists and governments to develop the long-term Copernicus program. Deploying even more advanced instruments, based on a more condensed timetable and geographic coverage of the earth and an extended project timeframe, Copernicus was launched to deliver even better information on the sate of the earth’s ecosystem and the events on land, the oceans and in the atmosphere. The existing space missions of certain nations also contribute a portion of the Copernicus data volume. The German Aerospace Center (Deutsches Zentrum für Luft- und Raumfahrt; DLR) for instance, has been conducting successful radar-technology-based satellite earth exploration missions with its TerraSAR-X and TanDEM-X satellites for many years.

The Sentinel missions are at the heart of the Copernicus space project. Instead of a single, gigantic satellite similar to Envisat, the EU and the ESA are now betting on smaller separate missions on specialized assignments. This approach does not only offer better safeguards against failure, but also more flexibility: The radar instruments used to conduct earth surface measurements, for example, consume a lot more energy than optical cameras. While the different instruments on the Envisat satellite had to share the limited energy budget, the separate Sentinel missions are now closely tailored to their specific individual purposes.

Satellite images are always up-to-date thanks to Sentinel-2

Sentinel-2A and 2B are technically identical earth observation satellites equipped with sensors that record electromagnetic radiation reflected from the earth at different wavelengths. The cover the wavelengths of visible light as well as portions of the infrared radiation spectrum.  While Sentinel-2A has been in orbit since June 2015, Sentinel-2B just joined the mission. “As both of them jointly circle the earth and each continuously observes spectral swaths of 290 kilometers, it is possible to revisit every place on the earth surface – with the exception of the poles – every 5 days,” says Claudia Künzer, Geo Scientist and Head of Department “Land Surface” at the German Remote Sensing Data Center (Fernerkundungsdatenzentrum, DFD), of the Earth Observation Center (EOC) at the DLR. “The delivered images have a resolution of up to 10 meters per pixel. Moreover, the combination of the Sentinel-2 data with the data provided by the Sentinel-1 radar satellites makes it possible to also examine regions of the earth that are frequently concealed from the view of optical systems due to cloud coverage,” explains Künzer.

Open source data for a wide spectrum of applications

The benefits of the recorded data extend well beyond satellite photo uses. “At the Earth Observation Center and after comprehensive processing work, we use the raw data to derive geo-scientific information, for instance in the context of global change. The objective of generating this information is to answer urgent society relevant questions, including those concerning urban habitats, agricultural and forestry ecosystems, coastal areas and regions in the proximity of rivers or the high mountain regions of our planet, but also to gain insights into meteorological questions and natural dangers,” observes Künzer.

These tasks require a lot of expertise, in particular when it comes to the processing of enormous volumes of data. “In our research departments “Land Surface,” “Atmosphere” and “Geo Risk and Civil Security,” we put to work innovative big data processing methods to analyze data – in particular based on years of time series analyses – to turn the data into geo-scientific information products. Land usage information, global settlement patterns, the quantification of flooding disasters around the world, ground subsidence maps or information on the dynamics of large glaciers are just some examples of what our portfolio covers,” explains Künzer.

Researchers, businesses and citizens do not have to rely solely on initiatives or permits from official authorities for these and other Copernicus data applications. Under an open license, this information is readily accessible for anyone who wants to view or process it. Hence, it is possible to develop business models, collaborative applications or artistic interpretations of the data that will benefit society as a whole.