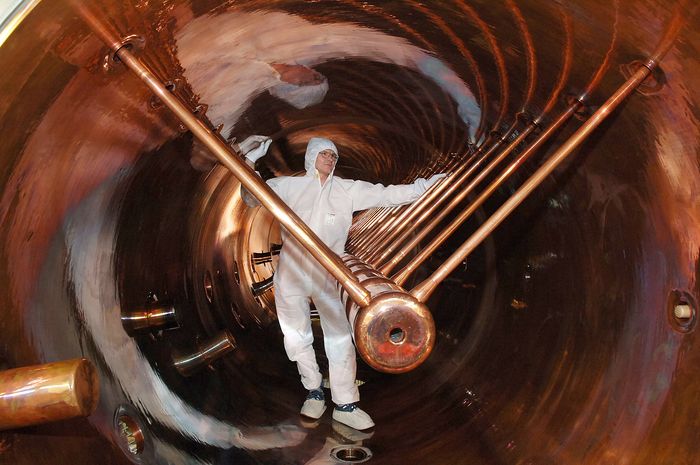 Research can make good speed: Ions race through the modern accelerator at the GSI Helmholtz Centre for Heavy Ion Research in Darmstadt at up to 90% of the speed of light. Ions are atoms in which part of the electron shell has been removed. GSI researchers use them in many different projects, such as in the synthesis of six super-heavy chemical elements or in radiation therapy to treat tumour patients. Large-scale, high-performance facilities provide the foundations for the work of the 1.350 staff employed by the GSI. These facilities include the 120 metre long linear accelerator UNILAC (Universal-Linear-Accelerator) and the heavy-ion synchrotron (Schwer-Ionen-Synchrotron - SIS) with a diameter of 70 metres which can accelerate ions to extreme speeds through which they take on high energies. These ions then disintegrate into nuclear fragments when they collide with the target. They are subsequently separated by mass and atomic number and collected in a storage ring.

Researchers at Darmstadt have a range of instruments available at their facility which is unique in the world and enables them to do basic and applied research. They use the radiation from radioactive nuclei, fully ionised atoms and even stripped uranium nuclei. More than 30 experimentation stations equipped with the very latest spectrometers and detector systems provide outstanding scientific working conditions.

Focus on nuclear and atomic physics

Experiments in the field of nuclear and atomic physics make up the main working area of the GSI. Researchers also work on plasma physics, materials research, biophysics, accelerator development and radiation medicine.

In the coming years the new international accelerator facility FAIR, one of the largest research projects worldwide, will be built at GSI. At FAIR an unprecedented variety of experiments will be possible. Scientists from all over the world will be able to gain new insights into the structure of matter and the evolution of the universe from the Big Bang to the present.